In the hills of Holmes and Knox County, Ohio Amish "Mom and Pop" grocers serve an important role in the 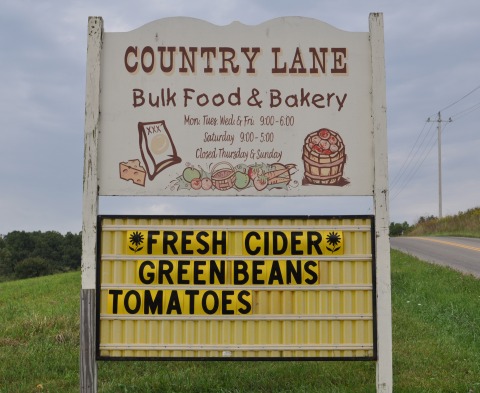 community.  Amish residents can shop for staples and sundries close to home and the money gets spent and deposited locally.  The Amish everywhere are generally very supportive of building local economies and nowhere has that been done better than in Ohio's Amish country.

An Amish homemaker will buy flour in bulk from her local Amish-owned bulk food store. 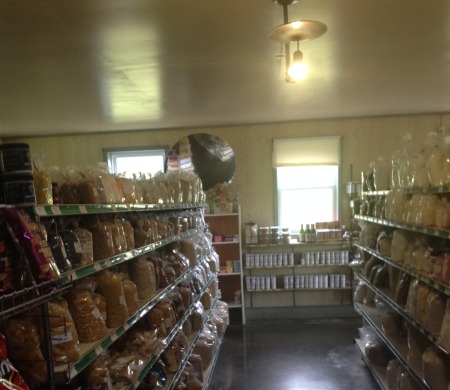 Those dollars then ripple through the community, to the shopkeeper, to the workers, and then to other local businesses as the employs spend those dollars.  One Amish businessman jokingly told me "We were into recycling long before everyone else, we were just recycling fives and tens."  And what he meant is that by building a local economy, the money stays local and helps everyone.  It's not like going to Home Depot and buying a hammer where very little  of that money stays local, most goes off to China or some distant corporate headquarters.  Studies have shown that dollars spent at locally-owned stores stay in the community at 3 times the rate as big box stores.  Something to think about!

That is not to say the Amish are immune from the lure of low prices.  Wal-Marts near Amish settlements have put up hitching posts and stock items of interest.  Of course the low prices come at a price: driving out locally owned businesses. So big box stores are a struggle among the Amish as well as the larger society.

So I was driving the rural roads of Knox County recently and stumbled upon this quaint bulk food and bakery.  At first I passed it, it was getting late and I had had a long day.  But it looked so serene and inviting that I did a U-turn and visited.  I wasn't disappointed.  I mean, it wasn't one of these massive, sprawling tourism emporiums, just a quaint little grocery.  It was the end of the day and I used up all my memory card on other photos so I just took this grainier cell phone photo inside.  The store is lit with skylights and gas lamps and has a very old-timey feel.

They sold homemade baked goods (cookies, breads, cinnamon rolls, yum!), cheeses, apple cider made from apples grown on the premises, and plenty of bulk food items.  The store was deserted when I was there except for several Amish young people sitting around a table in a backroom.  A young lady came out to help me and I asked her about Country Lane Bulk Foods.  She said it has been open for almost 20 years. That is a lot of dollars spread locally!  The County Lane Bulk Food and Bakery is located at 19541 Nunda Road, Howard, Ohio  Interestingly, they are closed each Thursday. The reason?

Amish weddings have traditionally been on Thursdays and it is not uncommon for Amish businesses to be closed that day, but this is the first settlement I've been to where they just throw in the towel altogether on being open on Thursday.

"It's such a large community and there are so many weddings through the year it's just easier that way," the young Amish woman working in the store explained to me.  So don't plan on going to Country Lane on a Thursday.