One-dish suppers are really popular among the Amish and, think about, why wouldn't they be?  If you are feeding a family of 8, you don't want to dirty every pot and pan in your kitchen.  Amish kitchens by the way are just so varied.  So many different cooks, skill levels, children, grandchildren, all vying for space. This is where Amish One-Dish Dinners can be very appealing, because they are so versatile.

The first Amish kitchen I ever ventured into some 27 years ago in southern Michigan was "cluttered" but in a neat way.  There were pots and pans hanging from hooks on the walls and ceiling, big ladles hanging from hooks, and stacks of plates in shelves.  I wish I had taken photos but back then cameras were viewed by most Amish with deep, deep suspicion.  Fast-forward to today and most Amish still aren't thrilled with cameras, but a certain acceptance has seeped in that everyone has a camera on their phone.

Anyway, back to the Amish one-dish dinners....anytime an Amish cook can avoid making a pile of dishes, why not?  That's where one-dish or, in some cases, no dish meals come into play.  For instance, a supper in a "foil packet" is popular.

The first Amish One-Dish Dinners recipe calls for "smoky links", these are, for some reason, puzzlingly popular among the Amish. If you aren't sure what a "smoky link" is they are like a hot dog. You can buy them in stores, some Amish make their own at butchering time.  The first recipe is meant for a grill, but you can easily do it in your oven.  And since it is made in foiled packets, you can call it a "no-dish" meal because most people would just eat it straight out of the packet, how is that for a no-mess meal? 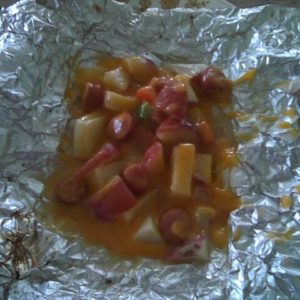 This next recipe is written less as a recipe and more as a series of instructions.  Comes from an Amish woman in Canada.  I think you'll be able to follow along:

Peel potatoes, wash and slice. Grease the casserole dish with butter. Put potatoes in in a layer. Next carrots if you wish, then a layer of sliced onions. Season with salt and pepper. Put pats of butter on top.  Next, prepare a hamburger; make patties and put over top.  Add a little water. Cover with aluminum foil and bake one hour at 350. Variations:  ham may be used instead of hamburger.  Turnips may be added.  And canned tomato soup may be pour over all, just dilute with about half a can of water.

Next one, not sure what makes this a "handy casserole" maybe because it is just so easy to throw together and all the ingredients are handy....that's my guess.  Man, in reading the instructions it doesn't get much easier than that!

Put a layer of browned hamburger in a dish.  Over this, place a layer of sliced potatoes (cooked till about done), then a layer of canned vegetables.  Add 1 can mushroom, celery, or chicken soup. Top with a layer of cheese. Cover with foil. Bake at 50 for 30 minutes.

This is another quick Amish-made meal on the stove-top:

Take one pound hamburger and one small onion. Fry until it changes color then add 2 cups potatoes cut into strips.  Add 2 cups shredded cabbage, 2 cups celery, cut-fine. Sprinkle with salt.  Add 1 /2 cup water. Cover and simmer for 20 minutes or until vegetables are done. Canned hamburger or chunk meat, cut up may also be used.

This next Amish One-Dish Meal....the Amish person who sent it to me called it a "one dish meal", but....hmmmm, I sense a scandal here (I'm just joking, some people take me seriously when I say stuff like that) because I count two dishes.  I'm just not seeing how you can do this with one dish, also, if it were me, I'd probably add some corn or peas to it. That would make it more of a classic "one disher" because it would have a veggie in with it.