Raisin pie is a mainstay in the Berne, Indiana Amish settlement.  I've sampled several variations of it over the years there and most are a more liquidy/custardy incarnation. But the kind I tried last week was different.

"Tastes more like a cookie," said Leah Schwartz who served me a slice of her homemade pie after a long day of exploring the settlement.

Sure enough, she was right.

You can see a picture of the raisin pie I'm accustomed to and the recipe here.

Meanwhile, here is the raisin pie version that I have a recipe for today.  Leah put out a piece of pie on a pretty plate and then set down a fork, but said:
"you probably don't want to eat it with a fork, just use your hands, it eats like a cookie," she advised.  And she was right. At first I was worried custard would run out and I would have a mess, but everything held together perfectly. Definitely a pie with little mess. 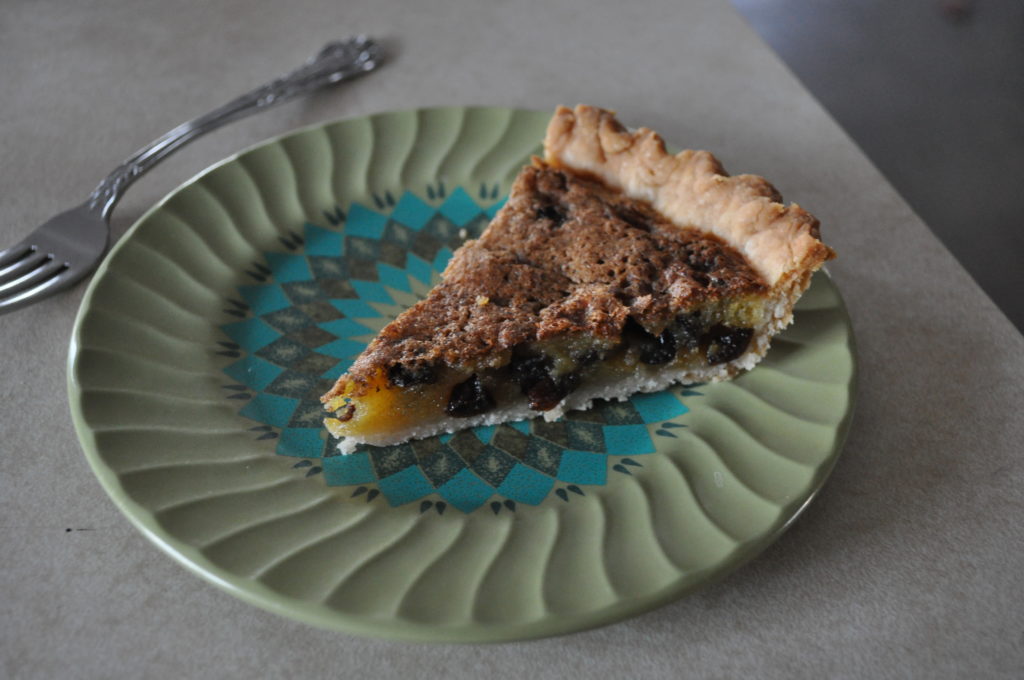 Amish Raisin Cookie Pie is a variation on the traditional dish.

The "raisin cookie" pie I was served last week had like a crunchier top that did encase a sort of custardy filling.  The raisin taste was more pronounced in this version.  In the more traditional versions the custard overpowered the raisins so that you couldn't taste them a whole bunch.  So if you like raisins you might like the raisin cookie pie better.  I'm not a huge raisin fan so I think I prefer the custard-y version.

Raisin pie is a delicacy often served at weddings in the Berne community, which contrasts to the pie's place in Pennsylvania's Amish community as a funeral dish.

Here is Leah's recipe for the Raisin Cookie Pie.