I do try to do everything I can to convey accurate information on this site. I never say I'm an expert on the Amish, but I AM an expert on my own experiences with the Plain people, and those are plentiful.

It’s always a little awkward answering these questions because I’m not Amish.   I was once giving a talk at the library in Shelbyville, Indiana and I was pumped and ready to go.  We had a big crowd, but just before I began I spied two Amish people in the audience.   "Oh geez," I thought.  That'd be kind of like giving a talk about George Washington with George Washington in the audience.  No matter how well you think you might know your stuff, the presence of a person of the topic I was about to talk about threw me off balance.  But I managed to pull it together and gave what I thought was a nice talk.   When it was all over the Amish man with the salt and pepper (mainly salt) colored beard came up to me and said:  "that was a great talk, I really liked it."  Whew, so I passed the test:)  I miss giving talks, it has been awhile since I've given one. It's always a fun time to meet readers and take questions.

I know we also do have some Amish that monitor this website (the Amish and the internet is a topic for another day) so I don’t want to any way appear to “speaking for them.”  I’m not.

But I had a reader ask a couple of questions the other day about Amish culture that I thought might be of wider interest.  She asked about whether "bundling" was still practiced in Amish culture and what the purpose was and why Amish men don't shave. So here are my thoughts:

BUNDLING:   Well, the purpose of “bundling” is to give a young, unmarried courting couple of a chance to be “close” without being sexual.  Bundling is just what it sounds like, a term in mainstream society might be referred to as "spooning."  Now, first, I don’t think bundling is widespread among the Amish today.  I’m not sure the tradition ever really went much beyond isolated pockets of Amish in Pennsylvania.  That’s generally very private behavior, though, and when I’m visiting an Amish family no one is going to say to me:   “Hi, Kevin, nice to meet you…this is my daughter Katie and she just bundled with her boyfriend last night.”     Rather, the Amish culture values a slow, steady clean courtship.  But it's not prudish, there is a lot of kissing and hand-holding, typical young couple stuff.  The Amish, however, are human.  Do premarital relations occur?  Of course.  And that actually is  more common than bundling.  In more conservative cultures, some resorted to putting a board between the bundling couple (who wants to bundle a board?) 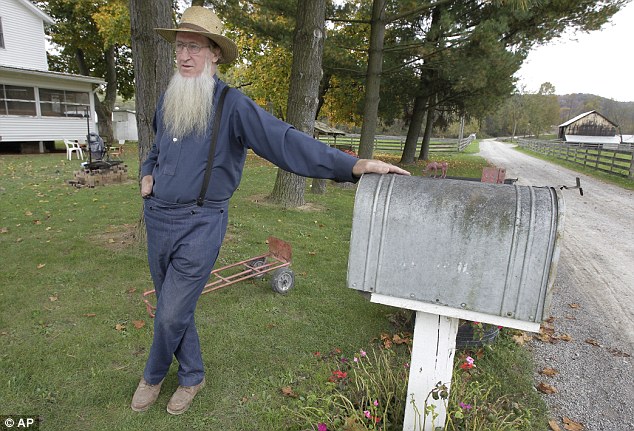 BEARDS:   When an Amish man gets married he grows a beard; it’s a mark of entering adulthood.  There are numerous references in scripture about beards.  And Jesus is often depicted as having a beard.  So, there you go. The reasons for the beard upon marriage were, originally, scriptural, but I believe that now it is largely tradition and cultural identity as much as anything.  Old Order Mennonite men, for instance, are largely unshaven.

Obviously beards occupy an important cultural spot in Amish life.  Remember Sam Mullet the "Amish" cult leader?  He chose to lash out at Amish whom he found to be scripturally wayward by cutting their beards.  Sam Mullet is pictured above.

Mustaches among the Amish have typically be eschewed because historically mustaches were associated with militaristic motives.  I'm seeing a slow shift in this belief, though.  In a few communities (Smyrna, Maine; Lobelville, Tennessee) I am seeing mustaches.

« Amish Reality Stupidity and Here's To Alaska
Amish in the News: Pinecraft, Florida - Heading into the Quiet Zone »