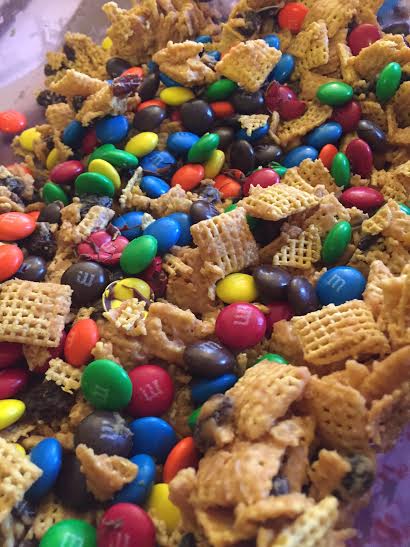 Gloria's recipe this week was for "Trail Mix Bars"....they looked super easy, so I thought that would be a fun activity for Aster and me.  Well, it almost was.

The recipe called for optional sunflower seeds, I thought it sounded like a healthful addition, so I bought some.  Only problem is that I bought sunflower seeds in a shell.  The slogan on the bag: Eat, spit, enjoy.   Yeah, no thanks.  If I have to work that hard to enjoy something as small as a sunflower seed, I'll just buy the shelled kind.  I mean, I understand, perhaps, the appeal of buying peanuts in the shell because, well, at least you get a peanut when its all over.  But having to crack and spit out a sunflower shell just for a puny seed?  No thanks, I am not a robin.  Anyway, I absent-mindedly didn't notice this face - that they were still in their shell - until I had dumped them in among the chex mix and raisins.  So I spent a half hour trying to pick out the sunflower seeds.  Still, no matter how valiant my attempts her to pick them out, I simply couldn't get every last one unless I wanted to spend another hour and even then I'm not sure if I could have.

So, I got as many as I could out and proceeded to make the recipe.  There was another problem with them, the bars just didn't seem to "adhere" into bars.  I ended up with a pan of crumbly trail mix with sunflower seeds sprinkled in.  It was scoop, chew, spit, and not enjoy.  I did talk to the Gloria about my results and she surmised that she had too large an amount of Chex mix listed as an ingredient.  It was listed as 6 cups, but she revised it to 5 cups.  Gloria often makes these recipes just from her head (an amazing encyclopedia of cooking) so sometimes when she puts them in writing she'll miss the mark. But not often.  Click here for the revised recipe.   Now I will say that the worst mistake by far was mine.  Even if the mix didn't adhere into bars, it still would have made a tasty trail mix.  Just not with sunflower seeds in their shell. So as long as you leave out the sunflower seeds altogether or get shelled ones and then reduce the amount of cereal, I think these bars would be a winner!