BERNE, Indiana — Horse-drawn buggies clatter their way back from town along a dusty gravel road on a quiet evening in this rural slice of Indiana countryside. One-room schoolhouses stand silent, waiting for boisterous youth to return the next morning.  Laundry — in rich hues of blue, turquoise and rust — flaps in the late-day breeze.Suddenly, riding on a westerly wind, faint at first but then louder, is a haunting, generations-old harmony of rich a cappella reminiscent of icy rivers, Alpine pastures and rich cheeses. 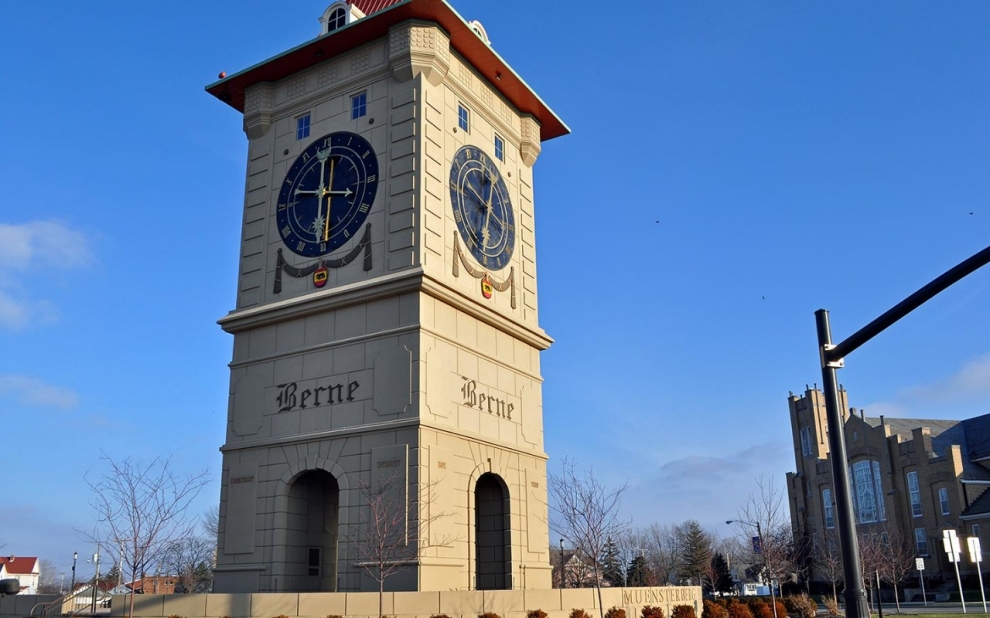 Yodeling — part of the fabric of this unique Swiss-Amish enclave — is one of many traditions that distinguishes this quiet corner of northeastern Indiana from other Amish communities scattered throughout the United States and Canada. In many ways these rural hinterlands have been frozen in time, rooted to their Swiss heritage. Yodeling music is piped out onto the main road in Berne. Edelweiss Florist is named after a white flower found high in the Alps. A local beauty salon goes by the name Swiss Hair-atage, and each July the city christens its new Swiss Miss. Cementing the city’s ties with Switzerland is the completion of the clock tower in Berne, modeled after a similar one in Bern, Switzerland, that has stood sentinel over that city since the 15th century.

At least on the surface, Berne’s Swiss cultural heritage appears fixed. But the currents of change are running swift beneath. The iconic open buggies of Berne are dwindling in number. Culinary favorites like raisin pie and wedding nothings — traditional fried dough disks — are being displaced by Big Macs and empanadas. And the beloved practice of yodeling is being abandoned by the young and scorned by Amish elsewhere.

“I guess we’ll just have to see what the future brings us,” said a woman selling dry goods in a bulk food store outside Berne, her blue eyes gleaming behind wire-rim glasses, wisps of black hair peeking out from beneath a black head covering known as a kapp. Because Amish shy away from media, she and several others interviewed for this article requested that their names not be published.

The Amish are a Protestant religious sect that grew out of the Reformation. Today the U.S. is home to almost 500,000 Amish who still live largely as their forefathers did. Sociologists estimate the Amish population nationally doubles every generation, and the Berne-area Amish contribute to that statistic: Families of 10 or more are common. According to the 2010 U.S. Religious Census,  6343 Amish lived in Adams County, which encompasses Berne and has some areas where a third of households are Amish.

Berne’s Amish trace their roots to Switzerland and Alsace, France, whereas the vast majority of Amish elsewhere — including the Amish community 45 miles away in Fountain City — have German roots. While there are differences in dialect, song and culinary customs, the Swiss Amish of Berne have many things in common with Amish elsewhere. For instance, indoor plumbing and electricity are taboo, and travel is by horse-drawn buggy. Yet even the buggies they use are different from those seen in Fountain City and other Amish communities. 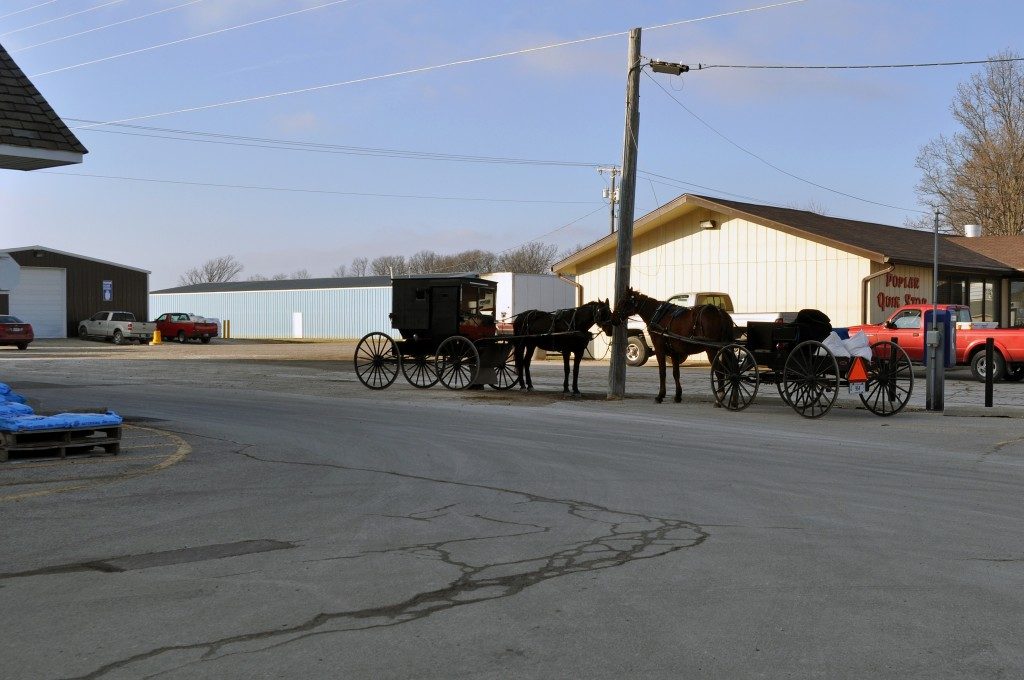 This photo in Berne, Indiana speaks volumes: a covered buggy, once never seen in Berne, parked outside a grocery store by the more traditional "topless" buggy.

In Berne open buggies still ply the farmlands, their occupants shielded from the fierce arctic gusts by mammoth wind-blocking umbrellas and some thick horse blankets.

No one seems to know why the Amish here have eschewed covered buggies. Ask them and you’ll typically get a shrug.

“I guess that’s just what our church leaders thought was best, but we don’t hold it against any of the churches who chose to have their buggies closed,” said a diplomatic-sounding Amish man selling baked goods on the shoulder of busy U.S. Route 27. “By the way, we call them topless buggies,” he said, guffawing.

The most common explanation for the topless buggy given by non-Amish historians is that covered carriages are associated with European aristocracy and its excesses. However, covered buggies — once unthinkable on the roads near Berne — have become more common here over the past two years after a local Amish church district broke ranks and approved them. On a recent day, covered buggies clattered into the McDonald’s parking lot, their occupants shielded from the December chill by four walls and a roof. Some of the closed buggies have tiny propane heaters inside, and most have battery-operated windshield wipers.

“You’ll see more and more of the covered buggies … I think it will come to pass,” said Ben Girod, an Amish shoe store owner, as he stocked shelves of shoes and boots, all black, to cater to his Amish clientele.

Open buggies have been such a part of life in Berne for most of the past 150 years that some are reluctant to change. “I wouldn’t want us to have closed buggies here. I would feel closed in,” said Marie Graber, who runs a small bakery outside Berne.

Berne is bisected by Route 27. Although the highway’s shoulders are outfitted with special buggy lanes to keep the horse-drawn traffic out of harm’s way, cars and trucks still barrel past at interstate speeds. The closed buggies offer protection from loose gravel being kicked up or spray on a rainy day. But the top-heavy closed buggies rock precariously when semi-trailer trucks pass.

Residents say other aspects of Swiss-Amish identity in Berne are also fading.

“There’s more and more English being mixed in with the Swiss,” said one Amish woman selling bolts of fabric in a store outside Berne.

Even unique traditional Swiss-Amish cooking is getting squeezed. McDonald’s runs a brisk business in town, with a separate lot for buggies. So it’s not surprising that breakfast burritos and homemade quarter-pounders are showing up in Amish kitchens, crowding out the hearty casseroles, homemade pies and stews they have been known for.

Lucy Schwartz, wearing a hand-sewn dress in dark blue, a common hue among the Amish in Berne, has witnessed a lot of change in and around Berne over the years. Gravel roads that swirled up giant dust clouds have been paved over. Spacious parcels of property have been repeatedly subdivided. Her house sprawls from several additions to accommodate multiple generations; she and her husband, Dan Schwartz, have 87 grandchildren.

She worries certain traditions she has enjoyed her whole life, like yodeling, won’t get passed along to the younger generations. “I grew up with it. It’s just in me,” she said before belting out some joyful, harmonious bars mixed with a few lines of English.

“I don’t think you hear [yodeling] among the young as much,” Dan Schwartz said.

Amish youth are more likely to listen to country music on their smartphones. (Smartphones are not officially permitted, but they are generally tolerated for youths, who are expected to give them up once they are baptized into the church.)

Lucy Schwartz said families yodel whenever they feel it coming on, perhaps while doing dishes or hoeing in the garden.

It is this group yodeling that Chad Thompson, an associate professor of linguistics at Indiana University’s Fort Wayne campus, cites as the most distinguishing aspect of the Amish yodeling of Berne.

“Amish yodeling is more commonly done as a group activity, with various parts and counterparts and harmonies,” he said. “Non-Amish yodeling tends to be more of an individual display.”

Despite the Schwartzes’ fondness for yodeling, many Amish in traditional communities elsewhere, like Fountain City, consider yodeling a frivolous use of time. That has put pressure on the Swiss Amish to give it up, according to Thompson.

“The only thing that could threaten yodeling, I believe, is a decision by the [Swiss] community that it is unacceptable,” he said. “They do not like frivolous music, and I have talked to Amish who believe that it is not right to yodel.”

But for now, yodeling trills along in Berne, the folksy harmonies vanishing into the Indiana air.