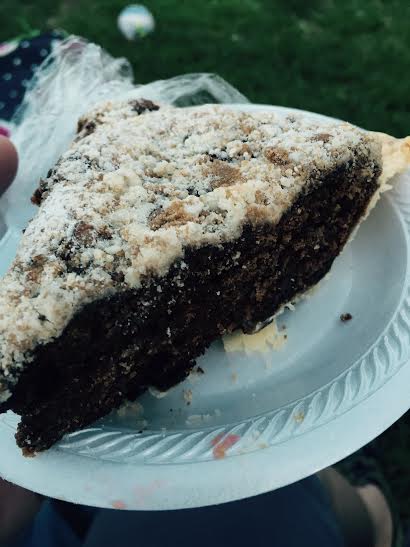 I recently attended the "Founder's Day" celebration in the quaint little hamlet of Germantown, Ohio and stumbled into a classic Amish shoofly pie recipe.  At the festival, which featured hot air balloons and bands, there was a pie booth with some local ladies selling slices of the typical fair fare: cherry, apple, and...shoofly?  Yes, cherry, apple and others like it are staples at festivals and fairs. But shoofly?  Not something you find much here in the Midwest.  So I snagged a slice and was not disappointed.  It was a classic Lancaster-style shoofly pie with a layer of molasses underneath a crumb-type topping.  Ah, what a treat. It was the last slice which I heartily ate.   The woman who made it said it was an old family recipe.  She was supposed to email me the recipe, but I never heard from her (some people don't wish to part with old family recipes!).  If there had been two slices I would have eaten one and taken the other home to reverse engineer the recipe.

Shoofly pies from Pennsylvania tender to be more moist than their drier, crumblier midwestern cousins.  But both are delicious.  Some variations in shoofly pies can be found.  I've seen "chocolate shoofly pie" in several Mennonite bakeries.

Like molasses?  Read about the Great Molasses Flood of 1919 here.