I wax sentimental whenever I see a recipe for "Shipwreck", especially one like this written in the original Amish Cook's own hand. The Easy 6-Ingredient Amish Shipwreck Casserole is a close cousin of the handwritten version you see below.  This recipe is intriguing because it is very popular in Amish kitchens.

You see, Shipwreck is a recipe that used to appear in many Amish cookbooks around the middle of the 20th century. By the time Elizabeth Coblentz included this in our cookbook materials the recipe was slipping out of culinary culture and you hardly see it today.  This is an early example of a recipe becoming popular in pop culture and then being embraced by Amish cooks.  They likely saw this as a hearty meal during lean times.

As far as where this recipe and its name come from? I've seen people say that the recipe's roots are in Newfoundland and legend has it that as a ship was running aground, the sailors grabbed whatever food they could out of the onboard stockpile and made a comforting meal out of it once ashore. That seems a little far-fetched. If your ship is headed for the shoals, seems you are going to worry most about just getting out alive and not what you are going to eat once you get there.

The casserole is not very attractive, but it makes up for it taste what it lacks in looks...so perhaps, some have speculated, that the name comes from the casserole's messy looks. That seems more likely to me. But then I have seen Southern versions that incorporate beans and Tobasco, so, you know, start with this Shipwreck and add on if you want.

So obviously frugal Amish cooks found the recipe and then started "downsizing" it.  You can see the original recipe above only has four ingredients. But most Shipwrecks have six or seven, but if you want to only do four, feel free. If you go the four-ingredient route, what remains is a very skeletal shipwreck, but I guess they figured it was still plenty hearty enough this way to feed a hungry family.

Brown and drain the hamburger before using in the Shipwreck.

Use lots of potatoes, slice them or dice them.

Again, this Easy 6-Ingredient Amish Shipwreck Casserole won't win any beauty contests, but it tastes great. Some Amish cookbooks pare down the recipe further by eliminated the cheese. 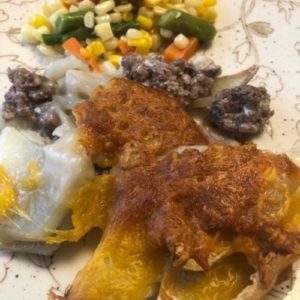 Tried this recipe?Let us know how it was!
« Sausage and Pancake Casserole
The Amish Cook's Healthy Fudge Brownies »