For those unfamiliar, Der Dutchman is a popular Amish-themed chain of restaurants with locations in Walnut Creek and Plain City, Ohio and they also operate the Farmstead restaurant in Berlin and a handful of others. This recipe comes from an early Der Dutchman cookbook and just captures a classic Amish concoction popular at Thanksgiving.

The dishes are Amish-inspired and this stuff earns rave reviews.  Many of the kitchen workers in the Der Dutchmans are Amish, lending their culinary expertise to the dishes.  '

This recipe for stuffing is unusual in that it is fried and not baked.  The frying instructions should be just to fry until "crisp", you then get a stuffing that is very moist with a slightly crispy exterior.

I have been to many of the Der Dutchman restaurants. There used to be one in Waynesville, Ohio, but a fire in the early 2000s ended that location.

This stuffing has very basic ingredients, you could use this recipe and swap out chicken for turkey or even sausage or venison.

The bread you use for this recipe can be really any kind: white, wheat, old hamburger or hot dog buns, baguette, any type of bread that you have on hand will work wonderfully with this recipe.

Most Amish would use a cast-iron skillet for this and that would be my preference too. But you could use a stainless steel pan or even something more like a wok for this if you choose.

The carrots add wonderful color and crunch and the fact that this easy Amish skillet stuffing recipe can be made on the stove, will free up oven time. You can feel

Mix all ingredients in a large bowl.

Fry in small batches on medium heat until crisp. 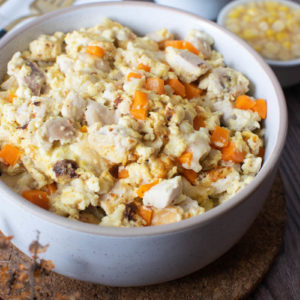