I used to live in a town bisected by train tracks and at any given time it seems there is a train whistle, either very distant or sometimes quite close.  Both my daughters share my love of trains. We enjoy going to model train shows and looking at train cars when they pass us on tracks.

I had a chance to do a magazine article several years ago about modern-daily railroad hobos. The story would have entailed a lot of research, travel, and care. The magazine said they'd pay me $100 for the article. I said "no thanks", I would have spent 10 times that in gas and time.

I stumbled upon this website recently about the best ways to "hop a freight train."  No, I don't recommend you try it.

But the romanticism of the rails remains and it occurred to me that railroad hobo culture and the Amish have more in common than one might think at first blush.  At its essence, one doesn't really need much to live richly.  Shelter, food, and friendship is really all one needs.  Our capitalist culture has created all sorts of items people "must" have, but we don't really need them.  So the idea that there is some world of harmless hobos right under our noses, clinging to the tracks and the railyards, with their own food, folkways, and friendships is appealing.  And that is the appeal of the Amish, too, isn't it?  An insular culture within our midst that is back-to-basics.  And both the hobo culture and the Amish culture are over-romanticized.    In reality, being a hobo is probably dangerous, lonely, and hunger-filled.  In reality, Amish life is much more difficult than the postcard panoramas we see on calendars.

Hobos were itinerant workers who generally rode the rails in search of work.  Some estimates have put the number of hobos at 500,000 as the 1800s turned into the 1900s but their ranks have thinned greatly in today's world with the availability of increased government assistance, tighter rail-yard security, and an economy that is less labor reliant.

Hobos experienced a boost in their ranks during the Great Depression when work was scarce and riding on the rails (as a sneaky hobo) was free.  I remember hearing stories when I was a kid about hobos that passed through our town during the Depression.  My great-grandmother's house was near a rail line and apparently they discovered my great-grandmother was a good cook with a kind heart. Hobos would stop by her house for a meal.  One of them scrawled a small arrow on the sidewalk in front of her house so other hobos would know this was a safe stop.  I imagine that the type of supper this recipe made was popular with hobos and hobo hostesses alike because it was hearty, easy-to-assemble, and could feed a quick crowd.  That's probably the qualities that eventually made the recipe appealing in Amish kitchens. Many Amish cookbooks contain a hobo supper or two.

My wife made this dish once and it was great.  Like other recipes we have featured lately, this is a hearty, stick-to-your-ribs casserole. There are a couple of variations on the "hobo supper."   Well, there are many, some are made in foil packets. Others have smoky links instead of hot dogs. But they all are pretty easy and cheap to throw together.

You can dice the potatoes, or just slice them. However you want to cut them is fine, just precook them before beginning this recipe. 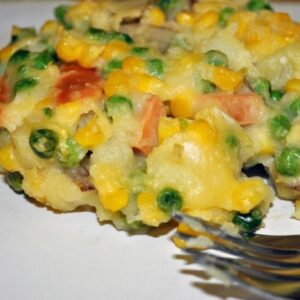 Tried this recipe?Let us know how it was!
« The Amish Cook: Quick Tater Tot Casserole
Amish Restaurant Cookies »