Amish coffee soup, anyone? Amish cooks have long been admired for their scratch skills and minimalist meals.  By minimalist, I mean whipping up a big hearty casserole with just a few on-hand ingredients. But the Amish struggled during the Great Depression period just like everyone else, perhaps more so.  Most Amish were farmers in those days and the Great Depression decimated agriculture.  So the already frugal Amish were forced to rely on even less.  So soups that required very few ingredients became a culinary staple. How does cold milk soup swimming with bananas and "Amish coffee soup", which can be made with bread or crackers sound? Give it a try!

Here's a video of my grandmother and Uncle Pat tasting coffee soup!

Here is the recipe for coffee soup (by the way, you can use saltines in place of bread…that might be better, actually.  And I have heard of some people putting cheese - gag - in their coffee soup. I left that ingredient out!)

The original Amish Cook columnist, wrote about some of these simpler soups in a column back in 1999

Today, I made a chili soup taking hamburger and browned it with a couple chopped onions. Then I added homemade V-8 hot tomato juice to it. I also made a thickening of several tablespoons of flour with water, adding it to the above in a four quart kettle , poured it in the boiling mixture, added a can of red kidney beans, and also seasoned it with 2 tablespoons of brown sugar and salt and pepper to your taste. I didn't add chili powder as the V-8 made it hot enough.

The girls also like their potato soup. I make it by peeling potatoes and an onion in a small amount of water. Cook till soft, mash it up and add milk, salt, and pepper and also add a teaspoon of margarine and heat. Don't boil after adding the milk. Just so it's hot.

My mother didn't have to use a recipe book for her cooking. We had more of all kinds of soups when we were smaller. There were soups like bean soup, rivel soup, potato soup, vegetable soups, brown flour soup, coffee soup, beef and homemade noodle soup and pot pie soup. Mother didn't have recipes for any of these, she just knew how much of this and that to put in.

When you think to back then, meals were much simpler and probably better for health. In the summer months, when it was hot, a cold milk soup was on the menu for supper. Sweetened cold milk was poured over crumbled bread, strawberries, mulberries, raspberries, or bananas. We could change the cold soup as different fruit came in and out of season.

In a 41/2 - 5 quart kettle, cook margarine and onion until tender. Blend in flour. Add remaining ingredients except cheese. Cook and stir until thickened and bubbly. Reduce heat. Add cheese. Stir until it melts. Simmer for 15 minutes. Serves 8.

These recipes always evoke a deep nostalgia within me.  They get passed down from generation to generation among the Amish. 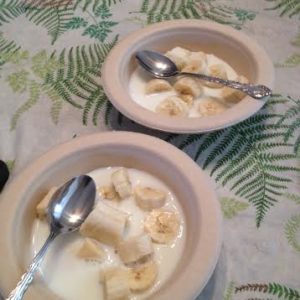 Keyword coffee
Tried this recipe?Let us know how it was!
« Just For Fun: Bees Gees vs. Queen
Happy PI/Pie Day! »