CAPTIONS:   Aster shielded from the sun in her floppy sun hat, Aster and I seeking shade, Aster asleep on my shoulder as we head back to the car (it's probably tiring being a cute baby!:), and Reds owner Bob Castellini to I let cut through the line of traffic to get into his prime parking garage space.

It's been sort of a crazy week here so taking a day off to go to a baseball game yesterday was probably the height of lunacy.  That said, free field level tickets are hard to say no to.  They were offered to us by my cousin who was in town visiting (his family has box seats there)  and we only see him once a year and I enjoy his friendship, so free tickets and a visit with Josh.  Absolutely.

My first mistake was assuming that a weekday, 12:30 p.m. game would be less crowded.  I didn't factor in that a more sparsely attended day game would be more than offset by competing with  downtown Cincinnati's usual yellow-barrel-enhanced traffic.

"We should probably leave around 11," Rachel suggested.

"Oh, honey, that's not necessary, we'll get there at 11:45 and be sitting around waiting, I don't think we need to leave until around11:30, I said confidently." 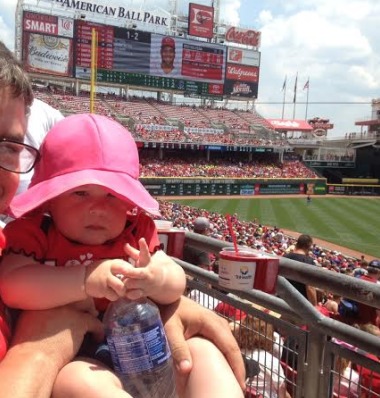 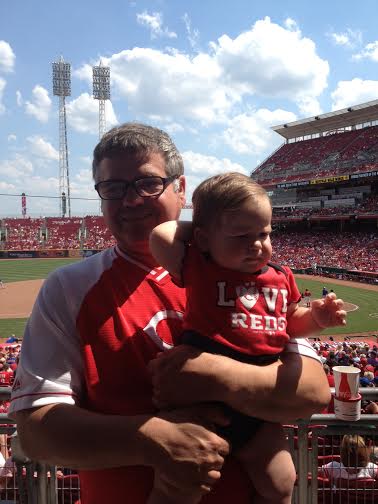 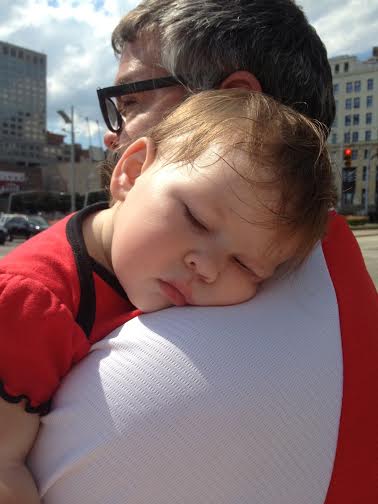 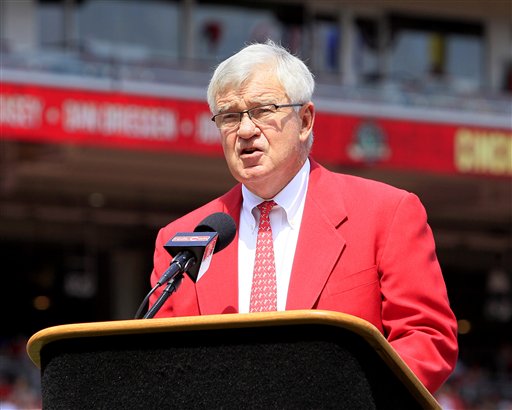 With little traffic one can be at Great American Ballpark in a hair over 30 minutes from my house.  I remember once in high school a friend of mine scored last minute Reds tickets and we left home at 6:50 p.m. and we comfortably in our seats at the stadium in time for the 7:35 start.

The highways were a little congested on the way but it looked as if we'd still make it there right about first pitch.  Not bad.  I could see the stadium, we were almost there.  But then traffic slowed.  To a crawl.    All the parking lots that I usually find refuge in say FULL.  A parking garage says FULL.

“All the workers downtown have to park somewhere,” Rachel mentioned.

“I wish I had thought of that about two hours ago,” I muttered.

And then I notice some white-haired dude in the  lane to my right is trying to muscle his way in front of me.  I’m in no mood to be courteous, so I ignore him and stare ahead instead.  It’s almost 1 o'clock, the game started a half hour ago. I'm still aware of him in my peripheral vision so slightly annoyed I glance over.  I immediately recognize the man motioning through his open car window.  It was Reds owner - owner - Bob Castellini.  Momentarily star-struck, I look to make sure no traffic is coming from the other way and  wave him through

We eventually find a parking spot a mile and  a half from the stadium. I grab Aster out of the seat and start hoofing it, Rachel in tow with the diaper bag and all the other supplies one needs to haul a baby around for the next two hours.  Suddenly, the thundering sound of fireworks fill the air.   Someone on the Reds had a home run.  It’s approaching 1:30, over 2 hours after leaving home.

We arrive at our seats midway through the third inning.  While the temperature was a pleasant 81 degrees outside, the bowl-shape of a stadium can acts like the bottom of a frying pan, concentrating and collecting heat.   Josh and his wife have twin three year-olds and, of course, we have Aster.   I realizing visiting with Josh – and probably anyone else for awhile –will be different than it used to be.

“Hi, so glad you made it here, hey we’re going to go into the stadium and take a break in the shade a bit,” Josh says, hustling his twins into the  cool refuge of the stadium’s bowels.

Rachel, Aster, and I settle in and try to take in the game. But it is hot.   Rachel puts a big pink sun hat on Aster.   She seems to be enjoying all the activity and colors in the stadium. That’s probably about all a 9-month old can absorb.  I give up trying to explain balls and strikes and RBIs, there will be plenty of time for that.

Josh arrives back at the seats, but then it’s my turn:

“I think we need a shade break, I’m going to take Aster for a little walk,” I said.

And so it goes.

Meanwhile, an elderly  woman in a wheelchair, dressed in white, stares vacantly at the field next to us.  The sun beats down on her mercilessly.  Finally an usher comes and gently suggests:

She doesn’t respond.  The usher puts his hand on her wheelchair and says:

Personally, I was touched by the gentle demeanor and concern of the young usher.  But her family standing nearby – in the shade – wasn’t so touched.

“Why don’t you mind your own business, granny is fine,” a man barks at him.   The young usher meekly protests and the man quickly retreats back to the shade while granny resumes baking without uttering a word.

I think I managed to follow one or two plays in the actual game. At one   the benches suddenly empty.  Shoves are meted out and tempers flare on the field.   Millionaire grown-men taunting each other like school children.  By the 9th inning Josh’s twins are in melt-down mode needing a nap  (Aster has the same thing perfected when she needs a nap).  Meanwhile, Aster just took everything  in.  She warbled with excitement at the loud noises, bright colors, and enjoyed one of her first tastes of ice cream.   That is one of my favorite aspects of fatherhood is that everything, even the mundane, can be fresh and fun through her eyes.

“I’m sorry, we’re going to have cut out now, they need their nap,”  Josh and his wife  say.  Quick hugs and handshakes and we see them off.    Between our kids, the heat, the cacophony of the stadium, Josh and I probably got to converse for about 5 minutes. But it was still fun.  Although the Reds did lose 6-4 in extra innings.