Don't be too hard on yourself if you've never heard of poutine.  I had never heard of it until several years ago when I was in Ontario, Canada and saw some on the menu at a Tim Horton's.   It's a curious  concoction of fries, gravy, and cheese.  There are many  twists on this basic combination, many versions have some sort of meat sprinkled on.  This is an interesting article about the origins and history of poutine, it's a relatively new dish, but has taken Canada by storm!

So, I found myself in Madawaska, Maine, near the New Brunswick border, not too long ago partaking in this favorite dish.  Pictured here is a batch made at Chez Helen's, a popular locally eatery and it was very tasty. 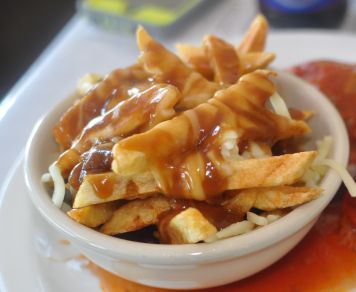 Poutine is popular in Quebec, New Brunswick, and northern Maine.

This is a more elegant version of poutine, other versions are sold out of food carts on the street or at McDonald's.

The Amish of Fort Fairfield, Maine, about 60 miles from Madawaska, are familiar with poutine.  I brought up the topic when I was visiting with them before heading for Madawaska.

"I've tried it several times and it was pretty good, took some getting used to at first," said an Amish man who tried the dish in Van Buren, Maine ("everyone speaks French there," he said).

If you live in the northern USA poutine is starting to creep onto restaurant menus, but if you're in most of the rest of the country poutine is not common, so what if you want to make it yourself?

The Food Network has a tasty, easy-to-follow recipe for this Quebec favorite. Click here to enjoy!