Dear Friends both far and wide,

I was impressed with a quote by motivational writer Brian Tracy so I'll share it with you:

"Move out of your comfort zone.  You can only grow if you are willing to feel awkward and uncomfortable when you try something new."

Don't we all face those times when there is something we know we should do, yet would much rather stay in our comfortable little nook?  It's so easy to just shrug it off.  How about joining me in making a point of giving a word or note of encouragement to a sad and lonely heart? Or perhaps even inviting someone over for dinner who doesn't have a family or friends to spend time with?

This week I'd like to introduce you to a dish that would be ideal to serve to your guests.  This unique dish is called Frogmore Stew.  Let me hasten to assure you that it doesn't have anything to do with frogs, whatsoever!  Although as a girl my brothers occasionally came in the house with frog legs for us to fry! For some reason Mom was never really excited about it, but to us children it certainly was a novelty!

Back to the Frogmore Stew, I'll tell you about my first experience with it.  A number of years ago before I was married my co-workers at the Amish store and I were invited to our boss's house for supper.  I was told we'll be served "Frogmore Stew" which sounded quite distasteful yet I was certain that it would be delicious if served at their house..  Even though it didn't sound appealing I was eager to give it a try and see what it would be like.

Upon arriving at their house we were welcomed into the dining room where they had extended their table providing enough space for everyone to sit down  A large plastic table cloth was spread over it.  As we were seated I noticed that there were no plates in sight only napkins and forks. After a prayer of thanks we watched with wide-eyed fascination as they dumped drained vegetables, chicken breasts and shrimp right onto the table!  Several piles were made in order for everyone to be able to reach them.  Dips and sauces were passed as each of us made little dabs on the table in front of us

It looked hilarious. We were all seated around a long table with food heaped on piles through the center. Using our forks we stabbed an item from the pile and dabbed it into our dips.  I'm a dip lover so naturally I had lots of fun.  Mmmm one of my favorites was mixing barbecue sauce with sour cream and using it for my veggies or meat chunks.

With Frogmore you can picked out whatever strikes your fancy.  This is especially nice for picky eaters while some may dodge the carrots or onions their "neighbors" are delighted to have several extra.

Yes, I found Frogmore Stew to be quite different, yet tasty.  I was intrigued with the idea of having something out of the ordinary so we decided to make it for my out-of-state boyfriend (future husband) when he came for a visit. Only that time we poured the veggies, etc onto cookie sheets instead of dumping it directly onto the table. Plates can be used instead!

This is a large recipe. It may be divided if desired which would also shorten the cooking time. Don't  limit yourself to the recipe.  Items may be added or omitted to both the broth and the chunked food according to your personal preference. 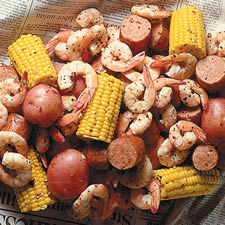 An Amish home seems an unlikely place to be served Frogmore Stew. But it is a delicious and festive dish that feeds a crowd! Photo courtesy Piggy Wiggly, South Carolina

Editor's Note:   This is dish -  sometimes known as "Low Country Boil - is a delicious example of South Carolina's sea island cooking. According to food historians Frogmore Stew is named for a tiny town on the coastal island of St. Helena. The multi-flavored one-pot dish was probably created in the 1950s by a local shrimp fisherman.  The dish calls for shrimp, corn on the cob, smoked sausage and new potatoes steamed in a savory broth. The dish has become a favorite for parties and celebrations.  As someone who studies Amish culinary culture, this dish is a perfect example of how non-traditional foods (i.e. burritos, tacos, Frogmore Stew) find their way into Amish kitchens and become favorites.