This article is a part of "The Amish Cook Column", a weekly series of featuring a story & recipe from Gloria Yoder, Amish wife & mother of six from Flatrock, Illinois

Last night I was the recipient of the absolute kindness of the dear youth girls in our church. Really now, they all made a huge splash for us married ladies. For the past six months they each had one of us married ladies as a secret sister, giving gifts every month or two. (Stay tuned for Hearty Tortilla Bowls With Homemade Taco Sauce!)

Last night, they hosted the most memorable Valentine supper and revealed which girl had which married lady. We were all ushered downstairs to the basement upon our arrival, where tables were set and attractively decorated. A long elegant runner was placed in the tables' center with candles, chocolates, and a large bouquet of flowers. No, not flowers; a closer look revealed the secret. It was a bouquet of cupcakes, frosted with swirly white filling, resembling flowers. Between the cupcakes were folds of pink tissue paper. It was beautiful, in fact stunning. Thanks to the very talented girls who took the time to add all these little touches, making the occasion special for everyone. And the veggie trays, you most likely haven't seen the likes. It looked like a flower basket, only it was filled with edible veggies. Using a head of lettuce in the bottom of a basket, thy stuck toothpicks in it, which had slices of peppers, fancy cut radishes, celery, cherry tomatoes, broccoli, and carrots, on the other end of the toothpicks. Next to each basket was a bowl with the most delicious bacon dip. Each place-setting had an individual cup with seasoned pretzels and homemade heart-shaped candy. It is noteworthy to mention that these candies were made by my friend who suffered a broken bone in the accident we were in a few months ago. Using two candy canes and placing them on a flat surface, facing each other, she poured chocolate in the center, holding the two together. Each candy was then placed on black paper with a white doily with our names written on it. These were placed on the tables, showing us where to sit at the table.

It was the first time for Julia to be among the girls who had secret sisters, to say the least, she relished her evening as one of the big girls. Hosanna was delighted to go along, since it was a girls' party. Baby Joshua also went along to be with mama, and Daddy stayed home with the three other boys.

When everybody was seated, one of the girls led a prayer, thanking God for the food and the occasion. The girls served each of us with a homemade soft tortilla, shaped like a bowl, with layered hot taco salad in the center. Beside it were dabs of guacamole, sour cream, and diced tomatoes. Absolutely delicious. The recipe for Hearty Tortilla Bowls With Homemade Taco Sauce is below!

The fun part of guessing who your secret sister was, came next. The girls all stood in a group while we ladies took turns guessing who may have had our name. Now, I thought I had a good idea of who had my name, but they did out-smart me. Knowing that I was suspicious of the one who had me, they worked together, detouring my ideas.

Editor's Note: The "tortilla bowls" in the recipe were homemade. You can make your own or buy them pre-made in the store. To make your own,Gloria said you make homemade tortillas (see recipe below) and then draped them over quart jars to bake to form them like bowls. Sounds a bit involved, but feel free to try!

Come to find out, it was Julia's teacher, Carolyn, who has been showering me with gifts and acts of kindness these past months. Laughing, I told Rhoda that since I was thinking it was her, I really had so many loving thoughts about her! "Well, it now all gets shifted to Carolyn!" she said, chuckling. At any rate, the children and I have had so much fun opening packages from her. There were even items for the children on several occasions, such as bubbles, little boxes of raisins, and little cookies.  They were the right size for children or for mom to snack on while they are napping. The children were also impressed with a cookbook she gave me with pictures to go with each recipe. Julia was especially intrigued with the healthy lotion, body spray, and body wash. She'd like to make some of her own.

Now, this time Carolyn personally handed me a gift bag. In it, I found a travel pillow, something I've been wanting for quite some time, three cleaning cloths, and a card that I now have on the kitchen table, reminding me of her kindness. I want to be that way. What could I do to bless others, as I have been blessed?  I don't know exactly where, may God point the way as he ministers to my heart.

*The girls used homemade bowl tortillas, but a regular soft tortilla or taco shell may be used instead.

The Amish are very much attuned to south-of-the-border flavors. Check out some of these favorite recipes!

These homemade tortillas are super!

Corn tortillas are my favorite!

These were so good! 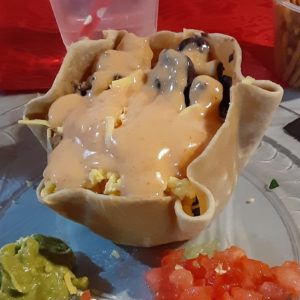