Cinnamon rolls are a staple in Amish kitchens.  The basics of the recipe make them relatively “easy” to make: flour, butter, sugar, eggs, and so on .  Few things make an Amish farmhouse smell better than the scent of cinnamon rolls lifting from a wood-fired oven, filling the home with a decadent aroma. And these Incredible Amish Butterscotch Cinnamon Rolls will definitely fill your home with a super smell and your stomach with an equally super taste.

Many Amish homemakers have their own “secret” family recipes for cinnamon rolls, whether they use a special flour, extra cinnamon, chocolate chips, caramel, maple, and on and on. The list of variations on cinnamon rolls are as extensive as the Amish bakers.  These Incredible Amish Butterscotch Cinnamon Rolls are another variation. Read these fun facts about cinnamon rolls!

One of the first Amish-made foods I ever tasted was a homemade cinnamon roll  and, wow, the feeling of cutting it out from the pan, plopping it warm onto a plate, and tasting it is indescribable.  Unlike doughnuts which are so light and fluffy that you wonder where they went, a cinnamon roll, on the other hand, is dense and more filling, which I like. You have a couple of those and they just fill you up.  And you can add frosting and filling and, wow, so good.

The type of ovens that Amish cooks use for baked goods like cinnamon rolls vary greatly.  More conservative communities still use mainly wood-fired ovens, many use kerosene still, and some use gas. Personally, I love the taste of baked goods made in a wood-fired oven.

These Incredible Amish Butterscotch Cinnamon Rolls are so good in their flavor, the mashed potatoes as one of the main ingredients add a superb texture.

You can use instant mashed potatoes for this recipe or whip up your own.

As you can see, these are so good...just drenched in butterscotchy goodness. You'll definitely want to try these if you like butterscotch and cinnamon rolls!

There are few flavors better than homemade, wonderful butterscotch. Here are some more recipes to showcase this old favorite!

This pie has been a Pinterest favorite for many years. 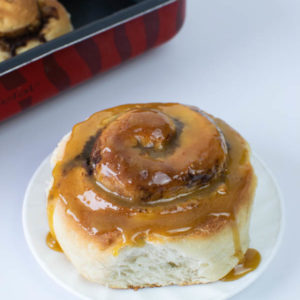