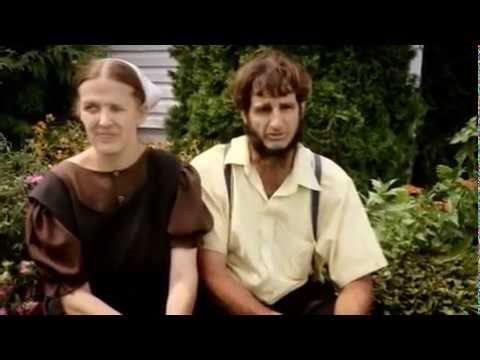 A scene from Part 5 of the six-part series...

Living With the Amish: Those of you who have been with me for a long time know that during the height of the Amish "reality TV" craze of several years ago, I had my own brush with it.  That's a story I'll rehash another day for all the newbies on this site.  But while I was working on that, I became acquainted with another Amish reality TV series.  And unlike most of the garbage that has aired, this one was superb. Superb. To this day I'm not sure how the BBC pulled Living With The Amish off.  The series never aired in the USA, but you watch it on YouTube.

Putting together a show like this with a people - The Amish - who don't care to be filmed is a Hurculean challenge,but they succeeded. My understanding is that the producer was just a really determined woman who combined a brash streak with a tender touch to cajole and persuade some Amish to participate. But, in my opinion, the end result was  a superb series that was respectful and showed many of the nuances found among the Amish.

Over the coming days I am going to share links to the series with some commentary of my own, so let's begin with Part I.  Out of all the parts of the series, this was my favorite. It was also the one that confounded me the most.   I am familiar with almost all the Amish featured in this series and Part I was filmed in Middlefield, Ohio at an Amish home of a young husband and wife (Jonathan and Marietta) who had no children.  The Middlefield/Geauga settlement is very traditional, very wary of photography and media, so how in the world the BBC ever got this part filmed is a mystery to me. To my knowledge, few in the community knew it was being filmed and I hope Jonathan and Marietta didn't get into any hot water with their church hierarchy because I think the end result was a very poignant and authentic show.   CLICK HERE TO WATCH PART I...well worth watching!