CAPTION:   This boarded up IGA sits vacant about 1 mile from my house.  Without the winter snow cover, the building looks even worse with weeds eating it up and the roof slowly sagging. 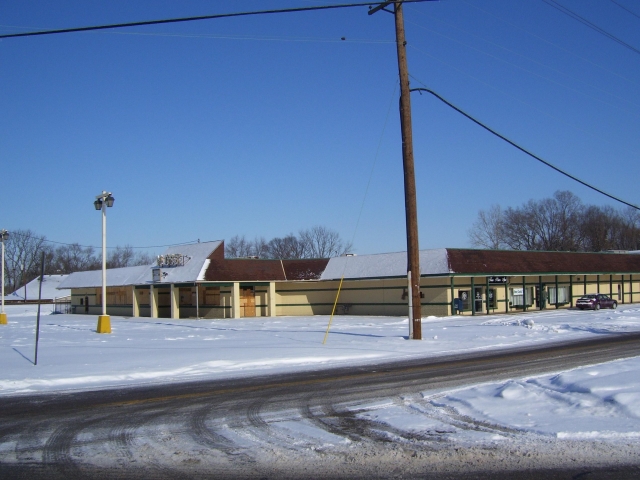 I'm not sure about others, but when I was a kid IGA stores were ubiquitous. In my hometown alone we had about 5 within a 5 mile radius.   There was McGee's IGA in Middletown and Trenton, Ohio.  There was Brock and Paul's in Lebanon and Hunter, Ohio.  Most of the IGA's had the name of their owner's in front.  Today, there are none.  IGAs were scrappy independent grocery stores.  The intitials stood for the Independent Grocers Association. But their snappy commercials in the 1970s and 80s smilingly said it really stood for "I Get Attention."  And you did at an IGA.  My parents used to buy beef from the local McGee's IGA, from locally butchering steer.  And, yes, there would be the old-timey butcher standing behind the counter.  He'd know exactly how thick Mrs. Monson liked her steaks or how thin Mr. Miller like his ham sliced.

IGA is on my mind because I was writing about this group of grocery stores in my "Life of Pie" series.

Later when I moved to Oxford, Ohio there was still a sleepy IGA offering cash-strapped college students an alternative to the Kroger behemoth across town.  That IGA has long since been shuttered.

There was an attempt by some IGAs in the early 90s to compete on a more level playing field with the emerging Wal-Mart grocery stores and expanding Krogers.  These were called "IGA plus". There were several in northern Kentucky.  These had a bank branch, dry cleaner, and florist inside.  There was a smaller IGA plus in Germantown, Ohio that held on until last year.  That too has now closed.

Cincinnati, Ohio used to be carpeted with neighborhood IGAs but they're largely shuttered, put out of business by Wal-Mart and others.

Personally, I do miss these IGA stores.  Sure, they did not have the selection that the larger stores do, but they had personality and a stake in the community.  I know there are still IGA stores around and I do run into them on occasion primarily in very small towns and perhaps my area of Ohio has just seen more shut down that most areas.  Do you still have an IGA nearby?  Do you shop in it?  What is it like?

« Amish in the News: Burning Issue in Montana; On the Watch For Measles in Wisconsin
Memorial Day Picnic Recipe: Amish Four Bean Baked Beans and Bacon »