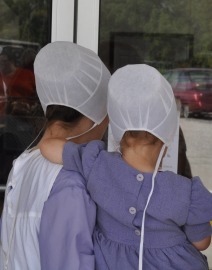 Nothing in life happens without some motivation and effort.  We have been blessed with an ample amount of work in the furniture shop these days. My husband Daniel and brother, Javin, who are co-owners of Rustic Woodcrafts, have been putting quite a bit of overtime in in an attempt to reach their goals and deadlines.

The project they're working on now is furnishing 18 cabins with knotty red cedar log furniture. When we received this order Daniel called his younger brother David who lives in Danville, Ohio and asked if he'd be interested in coming out and helping them for several weeks.

Our daughter Julia was all excited to have David here, especially when she found out he'll be staying at our house.

He certainly gave Daniel and Javin a big lift and, of course, it was a treat to have him boarding here.

During his stay, David had his 23rd birthday. We wanted to do something to celebrate his birthday so we planned to have a birthday supper at Javin and Regina's house.  My parents and siblings were there as well.  I always enjoy going to their house where hospitality rates A +.   Regina is such a great hostess. The Amish community where she grew up is in Allen County, Indiana.  That community is exceptional when it comes to hospitality. My mother calls it "Allen County Hospitality."

Regina had prepared a delicious frogmore supper.  Remember the Frogmore Stew I told you about several weeks ago ? It certainly was a hit!  Everyone loved it.  Ice cream and cake was served as well. Julia and I had fun earlier that day, baking and decorating a chocolate birthday cake for David.  By the way, if you like chocolate cake, you may want to try the recipe.  It's an old faithful one that we constantly use at home.

I couldn't resist putting 23 candles in his cake. When we were ready to present it to him, it was approaching evening and the candles just glowed in the kitchen.  Julia was totally delighted when David told her that she may help him blow out his candles. After several puffs she successfully extinguished them all.

After supper was past and the dishes washed, several of us took care of the little ones while the rest sat around the table playing games.  My brother, Jeriah, is one of the most avid story tellers  I've ever heard.  He kept Julia and her cousin Japheth totally captivated by his descriptive stories. Julia would listen intently and watched wide-eyed to every expression and move Jeriah made as he vividly demonstrated each detail.

Yesterday was David's last day at our house..  It made Julia so sad to see him go.  She kept telling me that she wants him to be here for supper. Next she persistently kept asking when he'll come back again. She had adored him as one of her favorite uncles.

Back to the chocolate cake I was telling you about. As a young girl I made countless batches of it by memory. Before any of us children were married we could easily eat an entire cake in a day. We especially like eating it with homemade yogurt. It seemed we never tired of it. There were several different types of frosting we used to make. I'll give you  the "Daniel-ized" version of it. When I change a recipe to specialize it according to Daniel's taste buds, I called it Daniel-izing. He loves mocha and coffee desserts, frosting and ice creams. Perhaps I can give you several more of his favorites in a future letter.

« Aster and I Bake a Cake (Moist Chocolate Cake!)
Amish in the News: Ice Cutting, Smoke Alarm Hide N Seek, and Other Stuff! »