This is an excerpt from a future book about my Amish experiences.  The book is tentatively titled "Not So Simple."  I have over 25 years of Amish, Mennonite, and Plain experiences, and I think it makes for a compelling narrative.....Someday it'll all be published into one book and shared,but for now, just thought I'd dole out a small slice....this is from when I was 18-years-old....I was returning to Adams County.  At the time I was a budding freelance writer and was on assignment for the kids publication, Highlights for Children. 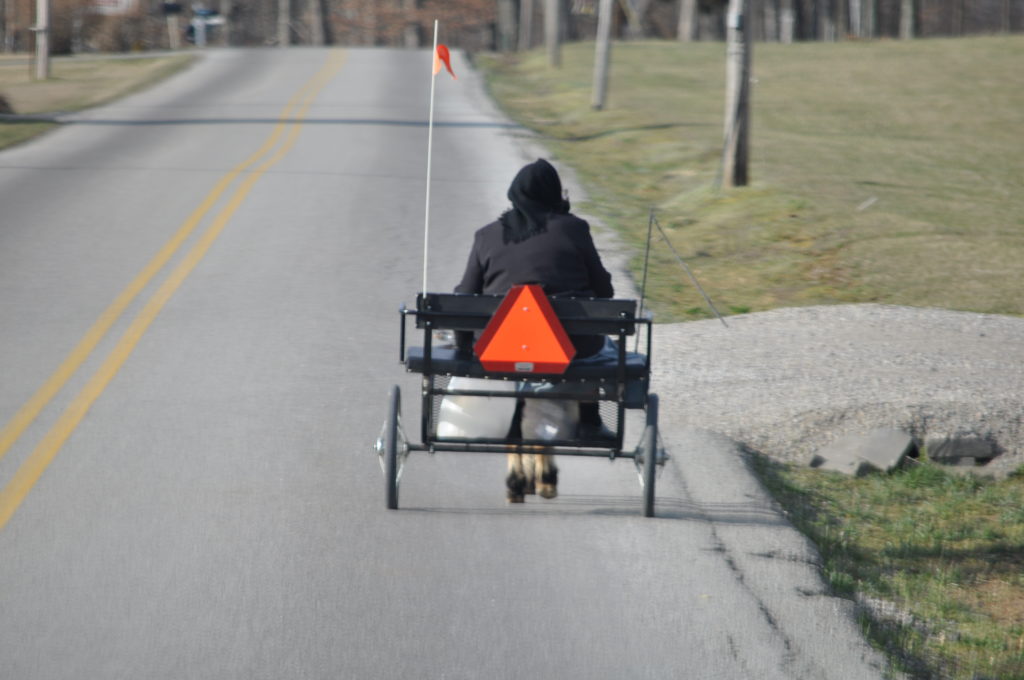 An Amish woman clatters down the road in her horse-deawn cart in Adams County, Ohio....

Adams County is a rural patch of hardscrabble hills perched on the edge of Appalachia.  It’s a place that is a mismatch with most of Ohio, seeming more southern than midwestern.  Bundles of leafy burley tobacco hang in barns and pan-fried catfish, sweet tea, and cornbread are staples on diner menus.

Smoke-colored ridges haphazardly splice the county, while meandering, flood-prone Brush Creek honeycombs the hills with seemingly bottomless valleys and hollows.  The rocky ridges roll to the eastern horizon like ocean swells frozen in the Pleistocene era, when the glaciers that flattened the rest of the state couldn’t conquer this county.

Many millennia later Adena Indians paid homage to the area’s mystical and unconquerable beauty by constructing the Great Serpent Mound, a 1300-foot earthwork which snakes along the banks of Brush Creek.  The Indians mysteriously vanished, but their famous mound remain and is today showcased in a state park.   Adams County was the only place in Ohio to see action during the Civil War when the feared Confederates of Morgan’s Raiders crossed over from neighboring Kentucky and hid in the hollows. Morgan’s men terrorized locals, but failed to capture the area’s unforgiving terrain either.   And rising 1000 rugged feet above the surrounding crags and furrows thrusts Buzzardroost Rock a foreboding dolomite thumb that seems to taunt anyone who dares to imagine taming the county’s wild ways. 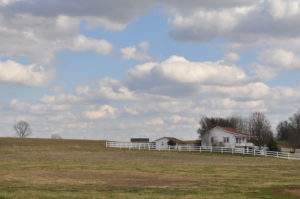 Despite its ability to both repel conquerors and romance interlopers, much of Adams County’s modern existence has been mired in poverty.  Double-wides cling precariously to unforgiving hillsides.  The high school graduation rate has stubbornly been one of the lowest in the state while unemployment has consistently ranked in the top tier of Ohio’s 88 counties.

In the early 1970s a group of Amish farmers from Delaware came to southern Ohio searching for inexpensive land.  They found it in Adams County.  Where others saw only craggy, stone-studded soil, the Amish saw a potential breadbasket. So with a little love and a lot of labor, the Amish transformed a string of sleepy hamlets into a storybook land of well-tilled farms and busy businesses.   The Amish, who pride themselves on their self-reliance, began farming and building bakeries, sawmills, fabric stores and bulk food outlets.  While suspicious of these odd outsiders at first, as Amish commerce began coursing through the economically parched hills they soon became valued friends and neighbors.  Like welcome mats, hitching posts began appearing outside of non-Amish businesses in the nearby towns.

Ohio 32 carves through northern Adams County like a hacksaw. The four-lane artery is known as the “Appalachian Highway” and was a somewhat successful attempt to open the rural “other Ohio” to the rest of the state.  Since the early 1980s, college students with their lives crammed into their cars have made the pilgrimage from Cincinnati to the sprawling party school of Ohio University over 150 miles to the east. Families use the road as a scenic shortcut to their Carolina vacations and Midwestern truckers use it as an alternate route to the markets of Atlantic Seaboard.   A handful of chain restaurants and other amenities have grown along the road like mold, but for the most part the highway has retained a rural aura.

When I finally arrived at the spot where I thought the roadside stand had been I found nothing.  I walked a few paces off the road.  Yes, this is where the horse had been tied up. I was sure of it.

I was stymied.  I hadn’t really planned on what I’d do if the store wasn’t there. I just assumed it would be.   I abandoned my plans to find the proprietor of the roadside stand and figured I’d just explore the area instead.  Perhaps I would find another Amish family for my article.   I scoured the hills, traversing roads with quaint names like Tater Ridge, Freeman Hollow and Burnt Cabin.    Development and farming in the rest of Ohio has largely bypassed Adams County, leaving behind undisturbed parcels of prairie tucked among the hills, which today provide protected habitat for scores of rare plants obliterated elsewhere.  Knee-high pyramids, home to the western most population of Allegany ants, pock the prairie.   Bobcat, uncommon elsewhere in Ohio, prowl frequently and freely through these thick forests.   And with plenty of places to roam and hide, the deer here grow fat and succulent.   In 2006, the second largest whitetail buck on record was shot by an Amish hunter in these hills, filling a family’s freezer for a winter’s worth of venison steaks.   While the Amish are a pacifist people who shun guns even for self-defense, they view hunting as a tool of self-sufficiency.

Wearing my young reporter’s garb of a crisply pressed white shirt and colorful tie, I pulled my car to the road’s shoulder and marveled at the area’s stark beauty.  I stood atop quaintly and quirkily named Measley Ridge, and inhaled the surrounding Amish ambiance. Coal-colored buggies clattered rhythmically down the narrow roads which wound around the hills like spent spools of gray thread.  Black socks, suspenders, charcoal-colored bonnets, and shawls hung precariously on laundry lines while also serving as a signal of simplicity.  Crossroads clusters of houses form quasi-villages with names like Tranquility, Unity,  Harshaville, and Dunkinsville that are tucked into the hollows.  Occasionally I’d see an Amish-owned variety store or harness shop.  I’d consider stopping to visit, but as fascinated as I was with the Amish, I was equally intimidated.   The beards, bonnets, pious-appearance, and somber exterior gave them an unapproachable aura to a shy 17-year-old.  So I would resist the urge to stop and gently accelerate away.     Finally, though, as I explored the twisting roads that spun through the ridges I saw a hand-scribbled sign announcing “homemade bread for sale.”  Figuring if I didn’t find an Amish family to talk to for my article, I could at least buy some homemade bread as a consolation prize.

The Amish, at least in 1990, were traditionally wary of outsiders, even ones that were responding to a sign offering homemade bread or fresh eggs.  If a stranger arrived unexpectedly, the young children would peek from behind the pleated protective folds of their mother’s dress and watch suspiciously.  The bearded patriarch would politely, but guardedly, tend to the wanderer’s business and send them on their way.

My car kicked up a trail of dust as it bounced down the driveway through a thick forest  following the signs for fresh-baked bread.   I arrived at a clearing in a bowl-shaped dip in the land where a ranch-style house perched at the edge of  the woods. The smudgy nose of a white bonnet-clad young girl pressed against the main picture window, her blue eyes transfixed by my presence. Several barns, outbuildings and pastures were also scattered around the bowl. A few pigs and steer roamed in paddocks outside the barns. The dust had barely settled from my unexpected arrival when a stout woman with a white head-covering and solid rust-colored dress came to the door of the house.

“What’s your business here?” the woman asked cautiously, her eyes intently inspecting me.

“Um…I saw your sign for homemade bread.   You have any available today?” I asked nervously.  A journalist’s job is a peculiar choice for someone shy, but I found that it was a great way to get to know people that I might have otherwise been too timid to approach.  When I was in the guise of a journalist it was my job to talk to people so I found it much easier. It was in much the same way that the Fool-the-Guesser booth forced me into on-the-job extroversion, but as soon as my microphone shut off for the day the fog of shyness would once again reclaim me.

“Sure.  Just took a couple of loaves from the oven,” the woman said flatly.  “How many do you want?”