There is an old saying that has several variations, but it goes something like this: “Every Mama crow thinks her baby is the cutest.” I’ve smiled over it many times. It’s true; to me, our children are the ultimate. Realistically I know that my children aren’t necessarily the six prettiest children on planet earth, but to me they really are.

When I was a young girl, grandma always thought her 48 grandchildren and fifty-four great-grandchildren were the cutest. We'd smile and wink behind her back, knowing exactly what she'd say when another grandchild was born; regardless how her new grand-babies looked like, they were just soo cute! Maybe I understand a bit more of that, now that I'm a mom, and ya, I can't wait to be a grandma!

Joshua,our newest 'baby crow' is a pet by all; I certainly couldn’t imagine life withouthim. Everyone says he looks just like Elijah. I agree, he does look a lot like Elijah did when he was a newborn. Joshua’s dark brown hair keep getting wavier and his blue eyes shine as bright as ever. This week he’s six weeks old, we were tickled to have him responding to us doting over him by having him coo back to us.

Elijah is proud to have a baby brother look like him. I shake my head and wonder where his baby stage got to. He surprised all of us recently while watching us peel peaches. Picking up a butter knife, he sliced a peach perfectly in half and proceeded to remove the stone. No one had ever shown him exactly where and how to cut to open it and remove the stone easily, and now he was doing peach after peach like a little pro!
When Mary was canning pickles, he wanted to help; after Mary showed him how to fill a quart jar with cucumber slices, he proceeded to fill jar after jar until the job was completed. When we told Daniel's mom of his diligence of doing a precise job, her response was, "That is just how Daniel was when he was a little boy! I'd have him do the jobs that would require extra time and patience."
One day I told Mary that I think Elijah could wash dishes, even though he's only 2 ½. She agreed, the next day I filled the sink with warm, sudsy water, put some dishes in it and showed him how to wash it clean with a dishrag. He was completely impressed with the idea. He was amazing; without much fuss or mess, he had clean dishes in the rinse sink before long. When Jesse came on the scene, he wanted to rinse dishes, so that's what we did. You should have seen it, two of my 'baby crows,' both two years old perched on bar stools, doing dishes. With Jesse's ambitious help, it didn't take long until we had a mini-lake in front of the kitchen sink, running across the floor. Mama smiled; no, children are not all made the same, and I would never change either of their personalities even if I could.

Jesse has added a ray of sunshine in our home in more ways than I could ever tell. This morning I was feeling rather groggy after a night with a restless baby and thinking how good it would feel to get some more sleep when Jesse was waking up; his sweet little voice rose in a song where he lay in his crib and sang: "This is my story, this is my song, praising my Savior all the day long." It is precisely what I needed, hearing his innocent little voice in song, and being reminded to praise my Savior, all in one!
Ya, we need Elijah's quiet ways of doing small detailed projects and Jesse's endless ideas and gusto to try anything new or exciting. Both have weaved their way deep into our hearts. Isn't God the same way? He loves us all, no matter our personality traits; he yearns to have our whole heart turned toward Him in complete obedience.
Oh yes, and when I later asked the two little boys what they'd like to do when they grew up, Elijah promptly popped up with, "Wash dishes!"
I can't wait to tell him that once he's a teenager. And Jesse wants to be a logger. At any rate, I've got a feeling this mama will have some 'letting go' to do until all the children have grown up, but then my greatest longing and passion for all our little ones is for them to be in heaven someday and impact many souls for the Lord. 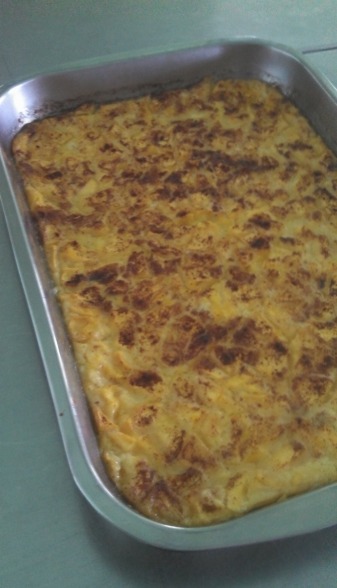 Okay, I'll be giving you a recipe this week that Mary made last week. Daniel's grandma in Danville Ohio, often made this peach custard pie when he was a young boy. Mary also made two of these for our carry-in lunch on Sunday.