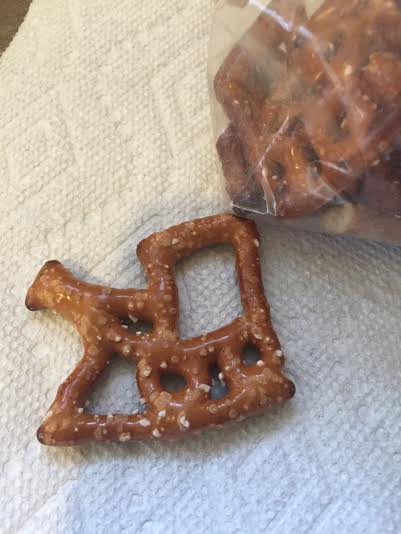 One of my horse-and-buggy shaped pretzels before it disappeared!

AUNTIE ANNE'S PRETZELS: Perhaps the most well-known Amish pretzel baker is Anne Beiler, founder of the Auntie Anne’s Pretzel chain (pretzel dog, anyone?).  She was born into an Old Order Amish home in Pennsylvania, but the family switched to the Amish Mennonite faith when she was a young child.  Anne Beiler started selling pretzels from a farmers market stand years ago and now sits atop a pretzel empire with outlets all over the world.  What is your favorite Auntie Anne’s pretzel? I like the pretzel nuggets dipped in cream cheese. Yum!  Who hasn't been to an airport or a mall and see (and smelled) Aunt Anne's pretzels.  Yummmmm....The pretzels are so popular that the local outlet mall has two Auntie Anne's stores in the same mall on different ends.

BEN'S PRETZELS: Watch out Auntie Anne, here comes Ben! This is a relatively new pretzel twist (ha, pun) or should I say craze that has taken root in northern Indiana.  An Amish man was involved in the company’s founding and they really do push the Amish angle, from the “buggy bites” to the bearded man logo.  I’m sure other Amish might be uncomfortable with such marketing, but the pretzels sound tasty. Anyone out there tried them?  I have not tried a Ben's Pretzel and I'd love to.