Night hung like the charcoal-colored stockings clipped to the clothes lines.  In the distance, the wind chattered through the trees, rushed across the dirt roads (locals called them “stone”) before dying out in the darkness.   Somewhere the rapid clatter of steel buggy wheels and pitter-patter of horses hooves could be heard but not seen.   Perhaps the Yoder sisters were coming home from visiting their parents for supper?  Or maybe two young lovers were out for a clandestine moonlit ride?   Perhaps Katie was finally having her baby and her husband was out to fetch the midwife?  I’d never know because I’d never see.  The night doesn’t give up its secrets easily in Amish country.  Occasionally I’d hear tales of wildcats in the blackness shrieking a blood-curdling call.   Cougars had been extinct in Indiana for a century.  Or perhaps in the patchy woodlands and thick bottomlands of the Wabash River headwaters some had survived. 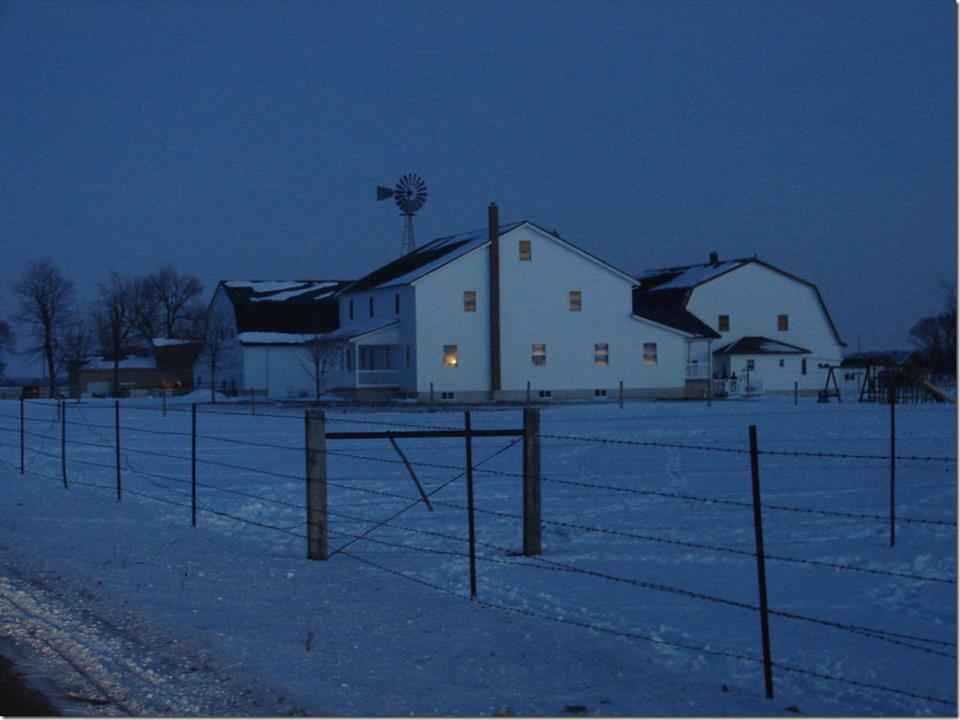 The chilling call of a coyote could occasionally be discerned in the night, while above a panorama of pin-point lights winked and twinkled their galactic greetings, undimmed and obscured by the white haze of the cities I was so used to.  This was the scene after sunset in the Amish community outside of Berne in the early 90s.  Darkness was the master of the night.

I’ve spent hours exploring Amish settlements after sunset whether its been in Berne or Wheat Ridge or Manton or Partridge, Kansas.  Regardless of geography, there’s a sense of smallness where you’re swallowed up by the night.  And there’s a feeling of longing for family when one passes farmhouses lit by the warm hissing glow of a kerosene lamp, its windows welcoming.  There’s a recognition in these Amish settlements that we are passengers of the night, not rulers of the dark.  I once asked an Amishman what his family did after dark.

In Amish country, night means sleep. In winter when the sun’s candle is snuffed out early, the Amish read, write, play board games, quilt or converse, but there’s not an attempt to stifle the darkness. They greet it like a guest, welcoming it, inviting it in, not trying to wash it out with incandescent indulgences. We’re a society spoiled by our ability to tame the night.  Electricity washes away the darkness replacing night with light.  Dramas, dinners and late-night monologues and department stores open until 9 p.m., supermarkets all night, and truck-stops serving steaming pots of coffee at 3 a.m., all make a collective mockery of the night.

When I was a young journalist in Ohio I once was assigned to follow people who worked the night shift.  So I tagged along with nurses in brightly lit hospitals, truckers securing their loads at 2 a.m., and police officers breaking up  4 a.m. domestic disputes where couples bound by the peaceful vows of matrimony were embroiled in middle-of-the-night acrimony.

And so I’m back in Amish country on Burnt Cabin Road in Adams County, Ohio on a pitch black night when I’m 18 and there’s something spiritual, poetic, and overwhelming about the night and a people who pay homage to it by accepting it.  I felt the pull then and I feel it now.  But I climbed back into my car and headed west.  West towards Cincinnati. Toward the night, where the miasma of malls, chain motels, and a looping interstate cast a ghoulish whiteness into the black sky.  But I would return to Amish country many times at night.

I  remember one time spending the night in an Amish home struggling to fall asleep at 8 p.m., held hostage by the dark, accustomed to the light and noise of my world.  Yet I’ve spent other nights in Amish homes when, once I adjusted to the whims of the clock, my body settled into a deep, restful slumber covered by quilts lovingly made with knowledge passed down from generation to generation. There was a comfort in sleeping wrapped in the hands of history.  Those deepest slumbers would only be interrupted in the morning by the light leavening the eastern sky, the rooster announcing dawn’s arrival, or the smell of homemade cinnamon rolls rising from ovens below.  The last residue of darkness would fall away in the western sky and a new day arose in Amish country.