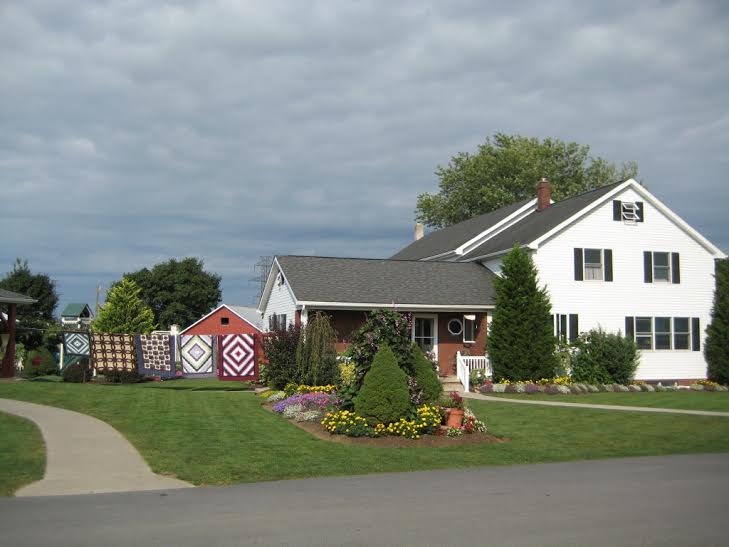 The Amish cover wide spectrum, from the most conservative Swartzentruber Amish to the Beachy Amish Mennonites.  Some of the most progressive Old Order Amish can be found, in my experience, in the Shipshewana area of Indiana and around Leola and New Holland, PA.  This isn't to say that they are out of step with the rest of the church in these places. Even the most progressive Old Order Amish are pretty conservative.  But some Amish in these areas are much more lenient when it comes to acceptance of photos and adopting technology for their businesses.

Riehl's Quilts,247 East Eby Road, Leola, PA 17540, is run by  Susie and Sam Riehl, who are Old Order Amish, as are all of their employees (some of whom, naturally, are their older children).

The Riehls opened the quilt shop in 1993 because they needed money to augment what their dairy business was bringing in at the time, and they saw lots of tourist buses going past their farm lane on their way to nearby quilt shops.  Since Susie's mother was already making and selling her own quilts, they decided to start selling hers and other locally made Amish quilts out of their living room, which quickly spread to more rooms, and quickly got to the point where they were either going to have to move to a larger house or build a separate shop.  They did the latter.

"To say that the Riehls have prospered over the years would be like calling James Michener a typist.  Their grounds are sumptuous and beyond even the Amish norm of immaculate.  The grass looks like a green carpet, not one weed or clump of crab grass to be found.  There are meticulously kept flowers, shrubs, and bushes everywhere, and the house itself does not,look at all Amish -- except, perhaps, for some green shades at the windows and clotheslines out back.   It is truly beautiful.
ALL of the quilts they sell -- including the ones in my photo, which were not "laundry," they were set out on the clothesline between the house and the shop as a display (Hello, tourists!!) -- are made by local Amish women whom Susie Riehl knows personally.  She herself told me that the first time I visited the shop a few years ago. No, the quilts are not intended for Amish; they're intended for tourists and are identical in colors, patterns, and designs to the Amish-made quilts auctioned off each spring at the local "mud sales" run by the volunteer fire departments.  For that matter, they are pretty much identical to quilts I've seen in other Amish-owned shops in Lancaster, all of which cater to the tourist trade! "
Janice's point about the tourist market is a valid one. There are many Amish entrepreneurs who shrewdly cater to the tourist trade while adopting different items for their home life. For instance, most Amish children play with dolls that have faces. But the tourists prefer the faceless dolls, so many Amish dollmakers make their dolls faceless.
You can visit their website (sort of) here.
« Weekly Blogroll: Amish White Bread, Amish Banana Bread, Peppermint Fudge Ribbbon Pie, and More!
Amish Etsy: Another Bird Feeder, Amish Casserole Basket, Gourmet Zucchini Bread and More! »