I don't particularly care to get caught outside in thunderstorms.  But I love savoring them from inside.   Whether it's in Amish country or God's country often the best shots are the ones you miss.  I remember one of the worst storms I ever enjoyed from the inside of my car was near the town of Carmi, Illinois on Interstate-64.  A massive bolt of lightning, kind of like the one captured in film here hit about 100 yards from my car.  It was blinding and deafening.  What a shot that would have been!

Another weather phenomena  - a little less violent but no less impressive - that I wish I had captured somehow on film was a mini "dust tornado" that I encountered on Illinois State Route 49 once...it whirled in a soybean field to my left, crossed the road directly  in front of me and then spun itself out as it crashed harmlessly into a barn to my right.

Yesterday, Aster, Rachel,  my mother-in-law and I went for a hike at a local park.  I always make it a point to check the radar before heading out especially on a soupy summer day and it appeared that all was clear.  But in the humidity-filled cauldron of the mid-afternoon, storms can bubble up fast and about halfway through our hike we start to hear distant rumbles of thunder.  Gradually the rumbles became not-so-distant and we picked up our pace.  Soon lightning flashes were visible in the western sky and the thunder was on top of us.  Aster hasn't particular taken to her stroller yet, so Rachel pushed the empty stroller and I did a trot while holding the increasingly heavy Aster.  We made it to the safety of our car just before the Heavens opened up and the lightning bolts really started pounding the prairie.

Aster was a trooper, but that was a little too close for my comfort.

Last night, safe and snug in bed, we were pounded by storms.  While I was trying to sleep, photographer Dave Shaner was ready with his camera to capture these impressive shots near Grand Lake St. Marys.  The first shot shows a shelf cloud scooting across the lake, and the other is the amazing shot capturing the moment lightning arcs down from the sky.

This morning in an email Dave described his storm encounter to me:

" It was pretty spectacular to have seen it. When I first took the pic I thought the lightning just went across the sky at least that's how it looked through the viewfinder. Only when I saw it on my computer later did I realize it had hit the lake." 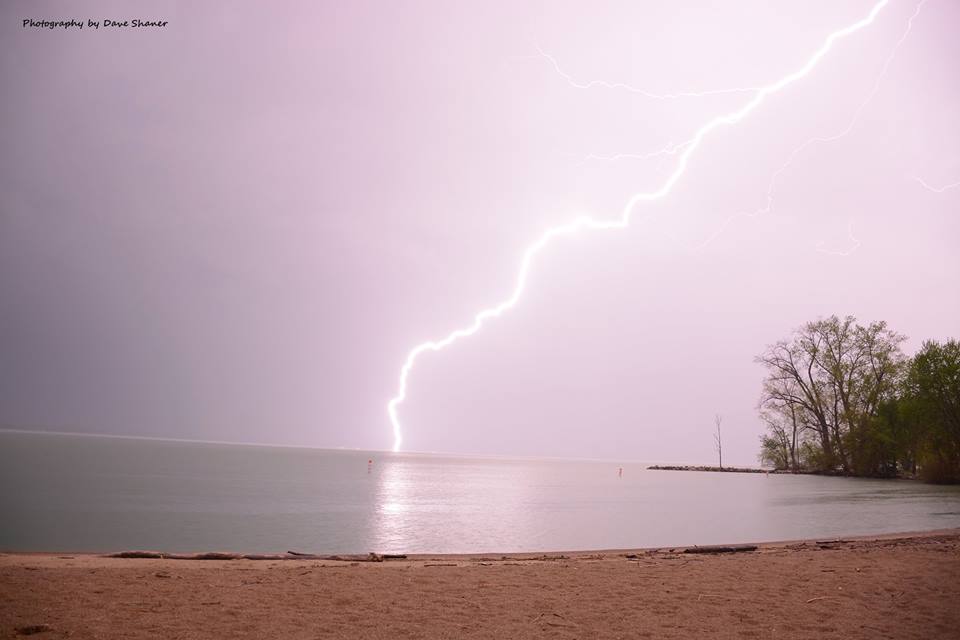 Now, you might ask - since this is Amish365.com - what about buggies in storms?   Well, we all know that rubber is a great grounder during electrical storms.   Not all buggies have rubber tires. Some settlements allow them (northern Indiana, for instance) while other more conservative churches just have metal wheels (not something you want in a storm).  But there are other considerations, too.   Horses can be spooked or harmed during a violent storm and buggies could easily get picked up and thrown  in a wind event.  So I think many Amish will learn to read the sky and patiently wait out any severe weather. Those that get caught in it might seek shelter under a bridge or in a barn en route.

This is how The Amish Cook described encountering a severe storm while riding home back in 2006:

"we decided to start home, but saw that a storm was brewing in the northwest. We waited at Emma's awhile longer and the storm seemed to just blow over so we started for home. But we were wrong. Almost halfway home it started getting very windy and large chunks of hail started hitting our buggy. We put our lights on and I could hardly see where we were going. The horse struggled to keep going. Rain pelted the buggy and we just all tried to remain calm and hoped our steady horse would get us home. The children were scared. How thankful we were for having a covered buggy, but it was still scary to realize what could happen. We sure were relieved once we arrived home. My husband Joe had been worried that we might be in the storm and opened the pole barn door for us to pull into. When we arrived home several branches were off our trees and my corn was flattened. It is starting to stand up again today. The rest of the garden also looks battered up some."