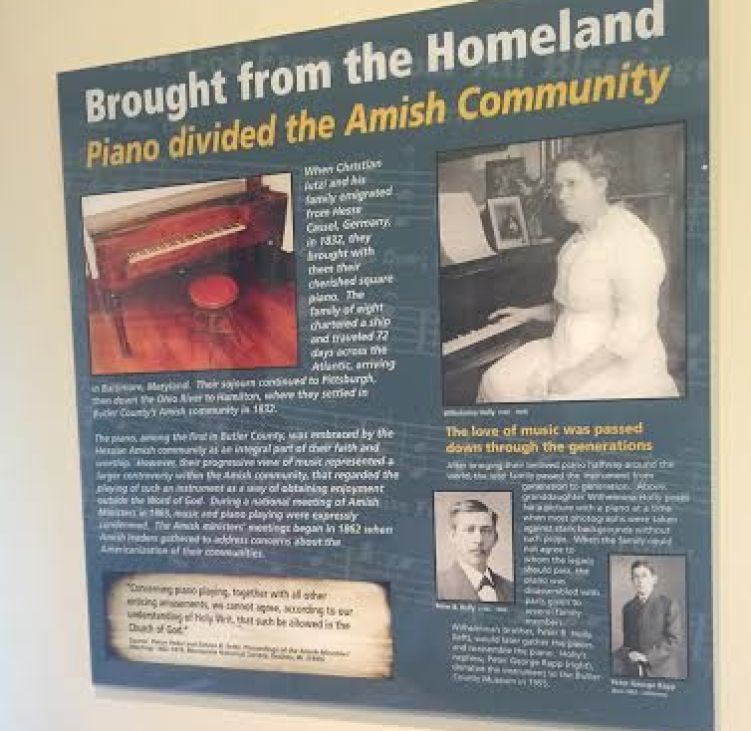 Enlarge on your screen and you should be able to read. The actual restored piano is on display (my photo of it was too blurry to bother with)

I had a wonderful time over the weekend visiting Chrisholm.  This is the immaculately preserved grounds of a former Amish settlement in southwest Ohio about 30 miles north of Cincinnati.  You can keep up with happenings at Chrisholm by liking their Facebook page.

While I was exploring the preserved original farmstead of one  the community's founders I came across a fascinating tidbit I thought I'd share.  Instruments are not generally used by the Amish.  They view one's voice as God's only instrument and anything else interferes with that relationship.  Over the years I have heard of Amish people playing harmonicas, but that's been it.  I have a vague memory once of seeing a guitar somewhere, but it was owned by an Amish boy and I think he had to get rid of it.

Anyway, while at Chrisholm, I was drawn to a small square piano which has a fascinating history.  Since musical instruments are generally not tolerated in Amish churches this family's piano caused quite the division in the community.  The anti-piano forces (read the above photo for the whole story) eventually won out and the piano was dissembled.  But the love of music didn't die over the generations and one of the descendants eventually reassembled and restored the piano where it now sits for all to enjoy!