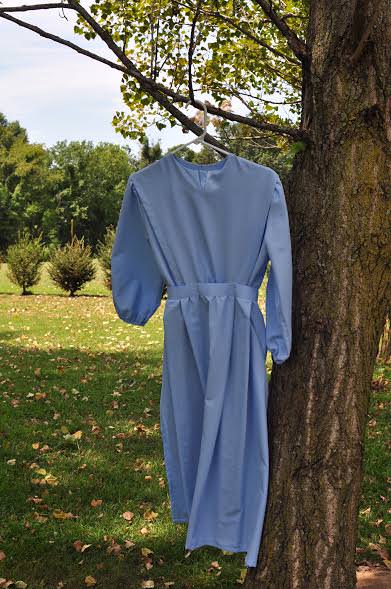 It was a beautiful fall morning. Oct 7. My husband Daniel and I were walking the mile spanning the distance from our house to the home where a wedding was to be held that day. Maria, a dear friend  who is only a year younger than I whom I have chummed with for as long as I can remember,  had long been anticipating this day to arrive when she would marry my cousin, Jacob.  I too was eagerly awaiting this day.

Everyone had been part of the labors needed to get ready for this important event. Over 400 people had positively responded to the invitations that had been sent out several months ago. Not only was there lots and lots of food to prepare, there entire warehouse at Jacob’s home, which is generally filled with groceries for their store, needed to be emptied out so their reception could be held there. Each family in our church also had the opportunity of hosting overnight guests the evening before the wedding. A few days before the wedding another lady in our church and myself made 14 batches of homemade crusts for vegetable pizza that were to be served the evening of the wedding.

After months of preparation the day had finally arrived. We were on our way. Daniel walked  beside me wearing his long-sleeved white shirt and gray pants while I wore my new light blue dress and apron. Austin was impressed with his perch on Daddy’s shoulders as we chatted about various aspects of the day ahead and prayed for God’s blessings and presence on it.

A buzz of activity greeted us upon our arrival. Everyone was responsible for taking care of their designated jobs. Jacob and Maria had asked Daniel and I to be youth coordinators which consisted of assisting the servers in an attempt to keep things flowing smoothly and give instruction as to what needed done. Besides the 30 servers there were also a number of cooks, ushers, dishwashers and other helpers. Julia was thrilled to be one of the six little children who served ice cream to the bridal party.

Upon our arrival at 7:30 AM  we were soon busied with helping the servers get started with their morning jobs such as slicing the 44 homemade herb bread loaves and packing them into buggies with individual jellies or butters and slicing tomatoes for the salad and various other duties . Once the jobs were completed the servers lined up. We were now ready to file into the large tent where rows and rows of backless benches had been set and were now filling with wedding guests for the ceremony.  The bride’s father who is also a minister had an inspirational message about building our homes and marriages on the solid rock of Jesus Christ.

At 11 a.m. the time had finally come for them to be united as one in the Lord.  Jacob and Maria stepped forward and answered the bishop’s questions and promised to remain true to one another and the Lord. Next,  the congregation stood to pray a blessing on the new couple. After everyone was seated their hands were joined together as they were pronounced husband and wife. Tears welled in my eyes. How beautiful, how sacred.  They were now joined as husband and wife for the rest of their lives no matter come what may.

Later that day they also signed their marriage certificate. With the marriage having been performed we along with the servers filed back out and walked down the road to where the reception was to be held. The servers filled the water glasses that had been placed on the attractively decorated tables. Mini tin pails were placed as table decorations with the date, Jacob and Maria’s initials, and a Bible verse.  The servers filled the buckets with Jacob’s specialty: Chex Muddy Buddies. For years Jacob was known for this sweet snack mix. He enjoyed making and, of course, eating his own fair share. Jacob requested  Chex muddy buddies at his wedding so putting them into these little pails that each guest could take along home seemed to be a good option.

The wedding corner (where the bride and groom are seated)  had been attractively decorated with roses, carnations, ivy plants, candlesand a large bowl of Muddy Buddies.

After the guests were served it was our turn to sit down and be served. It felt so good just to sit down and have someone else bring the food to us with no responsibilities at all.   Their menu consisted of taco salad, grilled chicken, scalloped potatoes, mixed vegetables, herb bread, and grapes.  280 pounds of chicken were grilled that morning and 108 pound of potatoes we used.

Some singing and a devotional followed our meal. Next it was time to watch Jacob and Maria and their bridal party unwrap their gifts. Jacob held up each one for the crowd to see, stated who was the giver and thanked them.

After the gifts were opened Jacob’s father, Paul, shared a few little stories about Jacob as a little boy. It was quite comical how Paul related the stories. Jacob used to brag about being a bachelor and living by himself. “And what would you do if you had a hole in your pants?” Paul asked referring  to the  homemade pants he had just finished accidentally burning a hole in. “I’d just have duct tape” was his quick reply. Isn’t that amazing how things can turn around?  Jacob now has absolutely no interest whatsoever in living out his bachelor dreams.  Jacob, no duct tape for you, a good wife, instead!