THE AMISH COOK
Editor’s Note:    The Amish are just one group of “Plain people” who call the USA home.     But there are also Mennonites and Hutterites (who live communally but otherwise share the same Anabaptist theology of the Amish) and then there is the Brethren church.  The Brethren Church comes from a religious tradition known as Pietism that has completely different roots from the Amish.   Rosanna is a member of the Old German Baptist Brethren who can be found in California, Kansas,  Missouri, Wisconsin, Indiana, Ohio, and Pennsylvania  The Old German Baptist Brethren generally allow photos and are more progressive with technology..Rosanna, 27, is a farmer, writer, and teacher who lives on her rural family farm in Kansas.  She writes about her life each week in her “Plain Kansas” column posted on Amish365.com.  Rosanna is a guest writer this week, writing about cast iron.  Gloria will return next week! – Kevin Williams, Editor 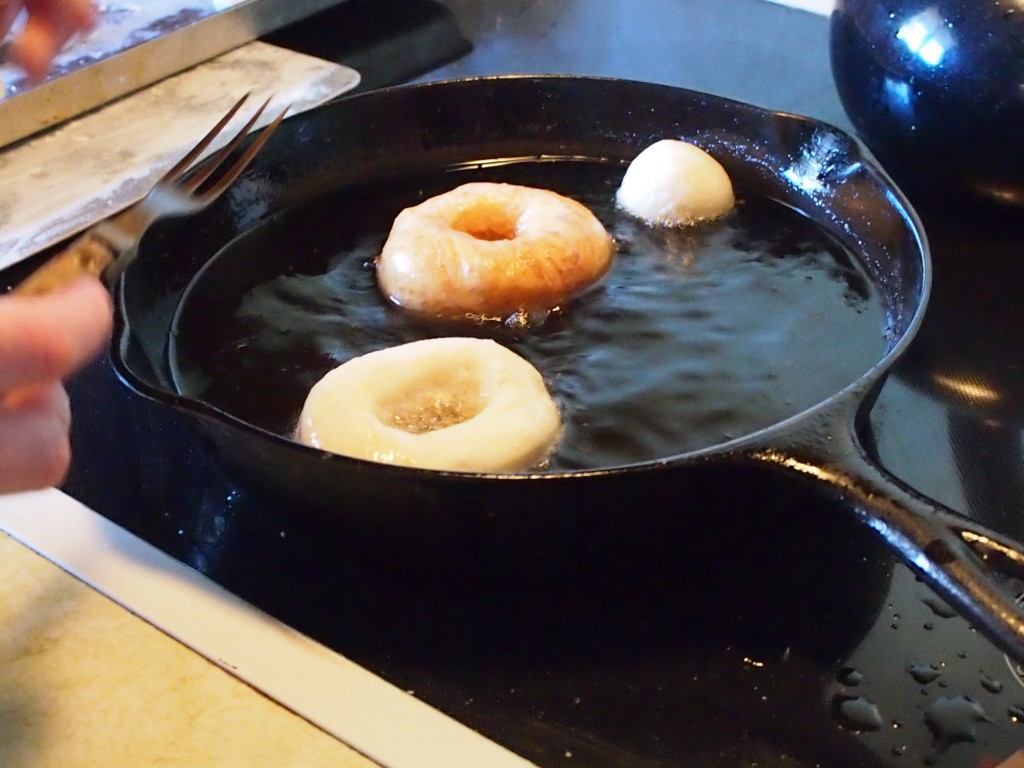 One of Rosanna's Cast Iron Skillets

Auctions make me nervous. Everything about an auction goes against my character. But there I was, at my great-grandma Davison’s estate auction, trying to get up the courage to bid for her cast iron pans. I squeezed to the front so I could see what the auctioneer was selling. I am not a squeeze-through-the- crowd person. If everyone else is stampeding to see someone or do something, I most assuredly will head in the opposite direction. The auctioneer started calling for bids on the skillets. An antique dealer started bidding, and I immediately raised my hand because no-way was some antique dealer going to

get my Grandma’s pans. I don’t like the whole auction concept. If I stop bidding, the other guy gets  it for just one dollar more. Plus, I am not an impulse buyer. It takes me a long time to actually decide that I will purchase something and then part with my limited cash resources. An auction doesn‘t give you time to think, and sometimes you don’t even  realize what  it is you are bidding  on.  I had decided that I would pay ten bucks for one of her pans. There were two, and all I really wanted was one. But that dealer kept bidding: Fifteen, twenty, twenty five, thirty... How far was this fellow going to go just for pans!!?  I swallowed hard and bid forty. “Sold! Which one do you want?" I reached out to select the round skillet and paused. What if the  square one  was worth  more?  I  sure  wasn’t about to  let that fellow  get it! “Both of ‘ém.”  I said decisively, shelling out the $80 for both.  And  I’ve  never regretted it.

I had three reasons why I wanted those pans enough to go against all my buying habits.' Mostly because they were my great-grandma’s. She was a plucky grandma who began her married life on a farm in Kansas in the middle of the Depression. I wanted an heirloom from her that was more than a knickknack to sit on the shelf. I wanted something of Grandma’s that I could use daily, to make her legacy a part of my life.

Secondly, my Grandma’s maiden name was Wagoner. These pans were “Wagner-ware” which was pretty neat, and another connection to my family heritage. When I cook in my cast iron pans, I’m doing more than cooking up a meal. I’m warming up memories as well.

Thirdly, these were just flat-out the best cast iron that money could buy. I intended to actually use these pans, and all the old folks told me that you couldn’t get any better quality than a Wagner. Well, those Griswold pans came close. Ever since I had been given this advice, I had searched earnestly at rummage sales and flea markets for one of those good skillets, but to no avail. The reason I was unsuccessful was because, unfortunately for me, Wagner ware is considered a highly collectable antique. That’s why this antique dealer had bid me up so high.

I didn’t grow up cooking with cast iron. Possibly because my mother did, and my mother was apparently anxious to use ”modern” pans in her kitchen. And then, one day Mom came home from town with a 12 inch cast iron skillet. I think she finally decided that her mother might have been into something with her cast iron as Mom was tired of replacing those non-stick skillets every year. Noon-stick skillets were more expensive than cast iron and the cast iron never wore out! Mom’s o Id pans might not be so bad to use, after all.

Folks are scared off from cast iron because it is perceived as a high-maintenance pan.  The mystery of cast iron is always in its seasoning.  That word – seasoning – is such an indefinable that it keeps a lot of people from trying to cook with cast iron.  It’s really quite simple, though.

SEASONING CAST IRON:  Give it one good scrubbing the first time you use it. Then oil that skillet inside and out.  With cooking oil, like olive or vegetable oil, not WD-40.   Then you stick that pan in a hot oven until the oil has dried. Ta-da! Seasoned!

CLEANING CAST IRON:  DO NOT let it soak in soapy water, this will cause it to lose all of its seasoning and begin to rust.  Use a pan scraper to remove food residue and wipe with a damp washcloth only if the next thing you cook may have flavor clashes. I don’t bother to clean the pan after frying eggs, but always after spaghetti. Sound gross?   It’s not. Even though I have several cast iron pans I am the only one that cooks in them as I keep them safely squirreled away from Mom. In my opinion, she scrubs her cast iron too much.  Mom is all about cleaning that pan up  and I tell her it would be easily to clean if she wouldn’t clean it so vigorously.  If you can’t resist washing it with soap and water like my mother , you don’t want to let it air-dry.   Dampen a paper towel with cooking oil  and wipe the inside of the pan down.  Put it on a stove burner until it has dried. Re-seasoned!

One bit of advice, though.  You may want to turn that skillet upside-down between uses.  I had a friend who only cooked his breakfast egg in the cast iron and thus didn’t need to clean his pan at all. But he wished he had after his wife shared that the housecat liked to come along and lick the pan!  Closer inspection revealed kitty tongue marks throughout the heavy seasoning in the pan.

Good cast iron is nearly everlasting.  What if you find a wonderful old cast iron that has been languishing in someone’s tool shed as a dog dish?  That pan probably has life left in it, but its resurrection should be left to experienced cast iron users  Other potential cast iron cooks are discouraged because even seasoning doesn’t keep the food from sticking.  This is because they are cheap cast iron.  Those Wagner pans are as smooth as any non-stick skillet. Cheap pans are bumpy and rough.  As a pan becomes used and seasoned the bumps will become smoother but a cheap pan never will.  Most of the cheap cast iron is sold in thrift stores and yard sales.   Fortunately, most of what I have seen being sold new in stores is good quality although there’s not much more than one manufacturer anymore. But none of them are quite the quality those Wagners were.

“Her children arise up and call her blessed” I’m certain my great-grandma Mildred, who painted hundreds of original oils,  never dreamed that a great-grandchild would value her old skillets as much  as she does the framed oil painting. Bless you, Grandma, for taking good care of your pans for me.