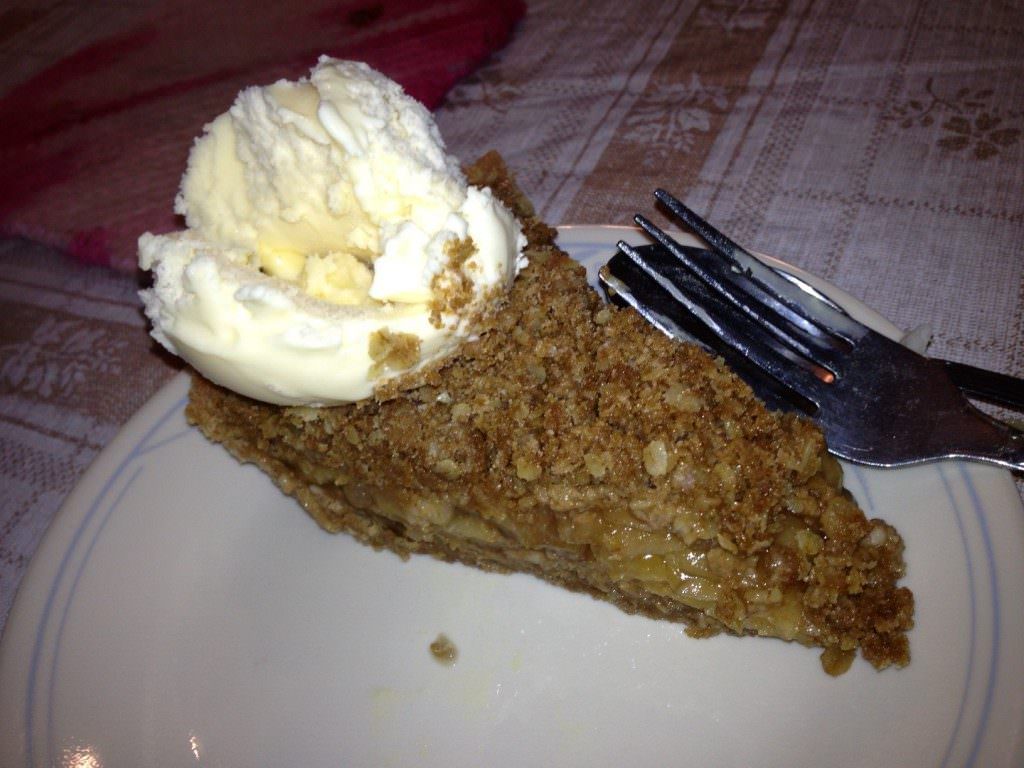 Various versions of Dutch Apple Pie are popular among the Amish year-round, not just during apple season. This is a Dutch Apple pie I enjoyed years ago, this one doesn't have a glaze.

Editor’s Note:  The Amish live in the United States and Canada.  Some Beachy Amish Mennonite churches (a more liberal sect of the Amish) can be found in Central America.  The Old Order Amish established a community in Honduras in the 1960s but it only lasted about 8 years before it was disbanded.  The has been no Amish presence south of the Rio Grande since then, at least until recently.  The New Order Amish, which Gloria’s church is affiliated with, has established a couple of churches in Bolivia and Argentina.  Some families have moved there and more will be coming.  As someone who has studied Amish culture for a numbers of years I find this an exciting and interesting development! – Kevin Williams

Most likely you are familiar with the fact that the Amish speak Dutch as their mother tongue and have English as their secondary language. If you would hear me speak you might notice that I d have a slightly different accent. There have been times English speaking people have told me that I have a different accent while others told me they never would have noticed. At any rate our primary language is what is called Pennsylvania Dutch. We also read in High German but we don’t speak that language fluently.

A common question: “What age do your children learn to speak English?”

Even though the Dutch is our primary language we are constantly exposed to English such as going to town to do our shopping or interacting with our non-Amish neighbors. It varies a bit from one child to the next on how much he or she is exposed to their second language. Most Amish children by the time they go to first grade are able to understand and speak it quite well.  At school they will then speak English at all times. This gives them the opportunity to be more fluent with it at a young age. Julia, at age 5, can understand a lot of English words and can speak it but not fluently. It sounds hilarious when our 2 year-old, Austin, tries to speak English. He uses a lot of Dutch words and adds English syllables here and there.  He importantly tries to sound like the big boys.

It is not unusual when we go to our town that someone will stop and talk to the children, asking them questions. I then translate for the children, explaining to the English speaking person that the children don’t speak English well.

I marvel at how fast young children can learn new languages such as Julia’s 3-year-old friend who went with her parents to Argentina to do mission work. After a few weeks of playing with her new friends she was beginning to speak Plat Dietch (Low German) like other little children there. It was amazing how swiftly she began  using new words, some of which her parents had not even learned yet. Spanish is the  native language of Argentina. I found it interesting how a few families from Argentina spoke Spanish and Plat Dietch and moved to Canada where they learned to speak English as well as Dutch and German like the Amish people. This added to an astounding total of 5 languages! Wow!  I do appreciate the opportunity to know several languages but what would it be like to actually be able to speak five different ones? My younger sister, Mary Grace, is learning the Spanish language in hopes of communicating better with those in Spanish speaking countries with the thought of perhaps spending time in some of those countries in the future with hopes of spreading God’s love with others.  Julia always has a keen interest in Spanish words as Mary Grace tells her new words every now and then. Julia always eagerly comes home telling me the new word she has learned.

Another dimension of children and languages that I marvel about is how they simply don’t have language barriers at all. Julia and Austin can play with their non-Amish friends for hours and not be hindered by the different language. They simply talk the language they know and get along just fine!

Interestingly enough even the Pennsylvania Dutch varies dramatically from one Amish community to the next. Take for example my sister-in-law Regina. When she moved from Allen County, Indiana I immediately felt drawn to her. We were close friends from the start yet the Dutch she grew up with contrasted enough with mine that we  simply talked English to one another.

After some time I was thrilled when my brother Javin told me his plans to ask her for a date. After they began their courtship she talked more and more Dutch which by this time we could understand quite well because she had heard some much of our Dutch voer the years. Today her Dutch sounds just like ours, though I still do like the “Allen County slang” and even miss not hearing it more.

Now for a good Dutch recipe. We all know recipes can’t speak languages yet as you bit into this Dutch apple pie you will be able to taste the goodness that has been handed down generation after generation of our Dutch heritage.