Have you ever had a chance to fill out one of those ‘One and Only’ sheets? You know those papers that ask questions of all sorts, like where you were born, what your occupation or favorite color, or pet peeve is?

A week ago, when Beth, a dear sister in church, gave me this set of 18 questions I couldn’t help but smile. As I glanced down across the page, some of the blanks I immediately knew what I’d jot down, others would take more thought. She continued to explain that she is giving one to each of the church sisters to fill out. After they have all been completed she plans to make copies, providing each of us a set from all the ladies at church.

So what would you say your pet peeve is? Or what would surprise people to know about you? I feel like I don’t know what would surprise people to know about me, because I didn’t go around asking everyone what or how they view me as a person! Maybe they would be surprised  to know that most of my years were filled with fears and more insecurities than I could tell. I so well remember that day, five years ago when I was rolling out cinnamon rolls at my mother-in-law’s house. Allowing too many fears to take the front seat, I gritted my teeth and dug in. Grandpa, who used to own a bakery for years and made thousands of cinnamon rolls, popped in and chatted, while I sprinkled cinnamon and brown sugar over the butter I had spread on the rolled out dough. As I proceeded to roll them up, forming a long rope, I cut them and placed them in a pan. I was not prepared for Grandpa’s remark, “I can see you have confidence, and you know, that is one thing you need to go through life.”

I smiled, okay, so feelings don’t always show, do they?

Ah, for a pet peeve, I just about can't stand when little boys are in desperate need of a haircut on a 100 degree day. (Us Amish folks do our own haircuts, so even though they don’t cost a thing, the little tikes at our house don’t get one as often as you’d think.) If you ask Daniel about his pet peeve, he'd say something like last minute interruptions when we're ready to leave or have an appointment, such as one of the children throwing a fit about which shoes to wear.

For this next one coming up, I’d really like to learn from those of you with more experience. “What is one thing you have learned in life?” Now really, if you have a gold nugget to share with us, don’t hesitate to grab a pen and paper and send it our way. share it with. Hey, I’ll make you a deal, if you would be so nice as to pass it on to our family some time in the next week, I’ll send my entire sheet back to you as a token of thanks! Okay, there it is, it’s up to you.

The last two questions sum it up well. I am sobered each time I read them; you know, none of us will be here forever. This is it: “I would like to be remembered as _” and “My goal or vision in life is_.”

We can all fill in the blanks, when the moment comes that we stand before our Maker, we will know absolutely and completely, that only what is done for Christ will last.

Now, I really can’t leave you hanging without our one and only cinnamon roll recipe. And I tell you what, If you don’t feel confident, just do what the Amish Cook did, grit your teeth and say, “I can do this!”

Speaking of cinnamon rolls earlier, I want to share my recipe for Gooey Caramel Cinnamon Rolls. They will be a hit at your house.

Editor's Notes and Photos On The Recipes

Making cinnamon rolls is something akin to an art among the Amish. Each Amish baker seems to have their own way of making these melt-in-your-mouth creations. Man, nothing, to me, symbolizes Amish baking more than a perfect pull-apart cinnamon roll with a thick frosting and warm interior. Wow.

This is your yeast, sugar, and water mixture that will make the gooey caramel cinnamon rolls rise.

This is the dough mixed up.

The frosting is delicious!

Roll, slice, and place in a pan before baking.

After they are baked.

✔️ Tips From The Amish Cook

* My mother taught me to roll the dough out in a couple different batches, then roll it as thin as possible to have plenty of cinnamon and sugar in each bite.

* After placing cinnamon roll into cake pan, give it a couple pats on top to keep the center from popping up during rising time.

*Frost rolls while still just a bit warm. It will produce shiny rolls.

Mother's Cinnamon Rolls - Wow! This is an old, authentic recipe, it is not in a "printer-friendly" mode. 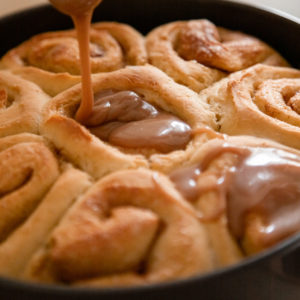 Tried this recipe?Let us know how it was!
« Lizzie Miller's Amish Apple Coffeecake
Tears On Your Pillow Pie »