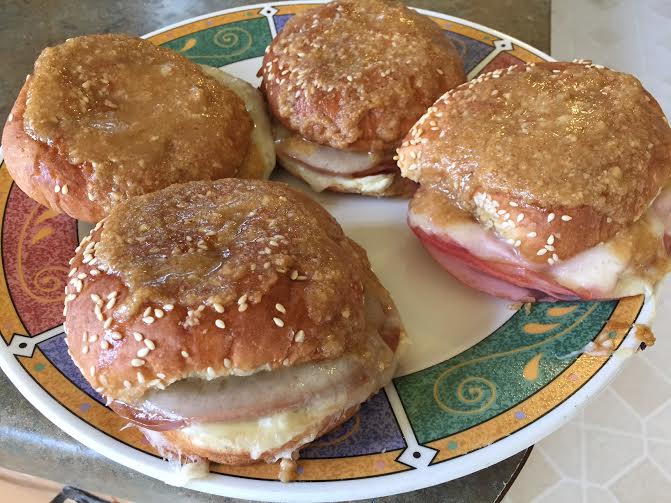 These are some of the savory ham sticky buns that Aster and I made. You can use different kinds of meats, ham, roast beef or even veggie "meat." Perfect ham variation for Easter!

Last evening we had an enjoyable project with our youth group. We had three bins of homemade bar soap, each containing approximately 3200 bars that needed to be packaged.

Packaging soap is an annual youth project in our church. The soap is  added to food parcels  that are distributed all over the world to less fortunate people.  For example, last year with the civil war crisis in Ukraine, an additional 100,000 bars were added to food parcels and distributed through Christian Aid Ministries to people there.  Only this type of soap can be added to a food package since it is unscented.

Before I was married I participated in this project each year.  The church youth usually range in age from 16 to 25.    I have been encouraged and inspired by Jesus’s teachings on reaching out and helping others and I have found it to be a blessing to be able to help the needy across the world even in a small way with something like soap. Sometimes the smallest gifts can make the biggest difference.  This is an ethic we like to instill in our church youth.

We liked the challenge of outdoing former records of how long it takes to do a bin or how many bars can be packaged in a minute.  Usually we also got to play volleyball afterwards which gave us extra enthusiasm.  Generally it takes 30 to 40 minutes to do one bin.

Now instead of racing with soap packaging, I was responsible for supper.  My hands were sticky until Mom and I had finished preparing 70 sticky buns. Last year I shared this recipe in the column. I decided to serve them to the youth and they were a smashing success. One of the girls told my sister-in-law, “These are the ultimate!”

Would you like to join me as we tour my parents shop were 20 of our youth are packaging soap?

Some of the girls are standing around table to the side where they are putting labels on the bags. Notice the labels of the package state the contents in 5 different languages.

On the center of the large table is a huge pile of bar soap with a person on each side getting two bars of soap, placing  them on a rack while their partner strips  a bag over the soap and sets it on another table.  Those on table duty were all white from kneeling amongst the bars with crumbles of soap all over.

“Is that what you call clean dirty clothes?” I asked.

Several others grab the bags, give them a good twist and put them through the tape dispenser. The next part is what 17-month old Austin was really impressed with: in his intense, all boy manner, he helped throw the bags into the boxes that were then emptied into the large bins.
You may be as astonished as Julia was when she peeked into the big bin of packaged soap . Her eyes popped wide open when she discovered Uncle Micah inside stacking soap bars.

Each bin also has some ends and pieces that are broken off. These are sent down to Kentucky where they are dried for a year longer before being ground and used for laundry soap. This laundry soap is also sent overseas so it can be used wherever needed.

It may be interesting for you know that all this soap is made in the neighboring Beachy Amish   community here in Illinois. Each year by the second week in January the people in Carrier Mills are ready to roll up their sleeves for the following 8 weeks of soap-making. Three evenings a week they gather to make four enormous batches each containing 1000 pounds of lard and 72 gallons of lye solution. After heating to the correct temperatures and mixing together its ready to be poured into molded trays. After setting two days it’s ready to be removed and dumped into the bins.

Approximately 350,000 bars are made within those 8 weeks and shipped to 13 Amish and Mennonite    churches to packaged before being sent all over the world. You’re also welcome to join us for supper. We kept it simple.  Here’s a plate, you may want to grab a few extra napkins to eat your sticky buns.  It’ll be worth the sticky fingers, though.  Help yourself to some noodles if you like and grab some brownies, pumpkin bars, and homemade smoothies for desserts.
For those of you who would like the sticky bun recipe, it was designed for my husband Daniel who loves the sweetness of the caramel sauce with the tangy mustard flavor along with onion and chive cream cheese. You’ll be sure to like it!  This would be a perfect way to try a different twist on ham for your Easter meal or if you are reading this after Easter, it’d be a great way to use leftover ham.

Hint: if you don't want to buy the cream cheese onion and chive spread, Gloria makes her own by using 4 ounces of cream cheesd with 2 tablespoons milk, 2 teaspoons of chives and 3 /4 teaspoon onion salt.