As you know, I'm not a hunter at heart. Nevertheless, we aim to eat more natural whole foods at our house, minus all the additives, artificial hormones, and the likes (the Amish apple dumpling recipe this week fits that bill!). Deer meat falls into the category and has come to be a staple at our house. Now, I've never been a big hunter and am extremely cautious and even skeptical about guns. Now here I was, we needed more venison, and Daniel offered to take me in our 60 acres of woods. I weighed it this way and that. Grandma had gladly agreed to watch the children, and I could tell in my husband's eyes just how much it would mean to him to have the time with me and the satisfaction of taking me with him. It thrilled me to have Daniel all to myself for a few hours.

Now imagine the scene this morning. It was breaking daylight. I sat on a buddy stand next to my man, wondering how a 'vacation' could be so relaxing and rejuvenating, yet so nerve-racking as we kept waiting. Generally, if I'd be joining a hunt to only watch, I'd take a little snack along, but not this morning. I was all eyes and ears for deer and merely soaking in my time with hubby. We chit chatted as we touched on long-ago memories, including the Sunday afternoon date we had in the wooded valley right next to our stand and how we made wedding plans that afternoon.

Turning to my left, I caught sight of a doe. Earlier I had asked Daniel if his heartbeat still quickens every time he sees a deer. I was a bit comforted to hear his assurance that it does. Now with Daniel's instruction, I took careful aim and shot. "You smoked that thing!" Daniel exclaimed. Now I'm not a little girl anymore, but I was genuinely excited. We quietly waited another 20 minutes when Daniel declared, "There's a buck over to my side!" I was the only one with a buck tag, so once more, with Daniel's calm instructions, I bagged the deer.

The two of us were soon headed hand in hand toward the buck now laying right next to the creek where we as a family have spent many happy hours this summer. It was a nine point, nothing huge, but to me, it was a trophy. In my way of thinking, a trophy does not have anything to do with the size of the dear, but how prized it is.

Now, here I was, tagged out and ready to head home to my dear little children after being in the stand for only an hour. I shook my head, could it be true? I thanked God, knowing that it will indeed be a blessing for us and others needing venison. The last couple of days had been on the rough side with special challenges I was facing with the children. To me, it felt like a touch of God, showing His provision. The verse, "I will never leave thee nor forsake thee," kept coming to my mind. Daniel held out his hand for a high five, the clap rang through the woods; at the moment, I did not mind the noise, the deer were bagged, and I was ready to hike home while Daniel resumed his hunt on back yonder in the woods.

As I stepped inside the door after my 15-minute walk home, I was greeted with six children happy to see Mama and thrilled to hear how God provided for us. They wanted to hear all bout it, as they gathered on all sides I told them the story.

Now we are all eager to join my parents and siblings as we gather for our traditional meal of Amish apple dumplings and deer heart and then swap stories of the opening day of the shotgun season.

Dumplings are doughy delights that are quite popular among Amish cooks because they are so easy and delicious, here are some more dumpling favorites!

This is a quick version of this classic, you can make this in 30 minutes!

I remember making - and eating - these, so super!

Paired with beef, dumplings are delicious!

This is a more no-frills recipe from an Amish man in Kentucky. 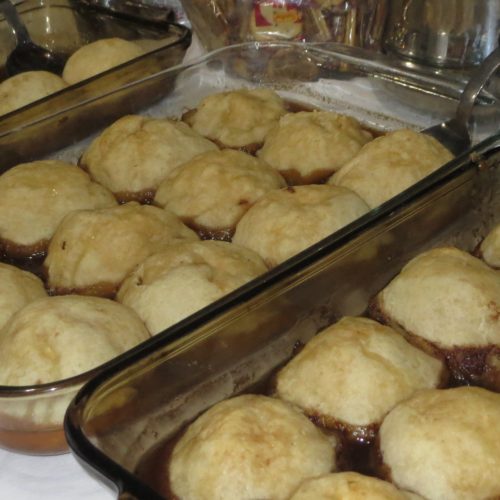