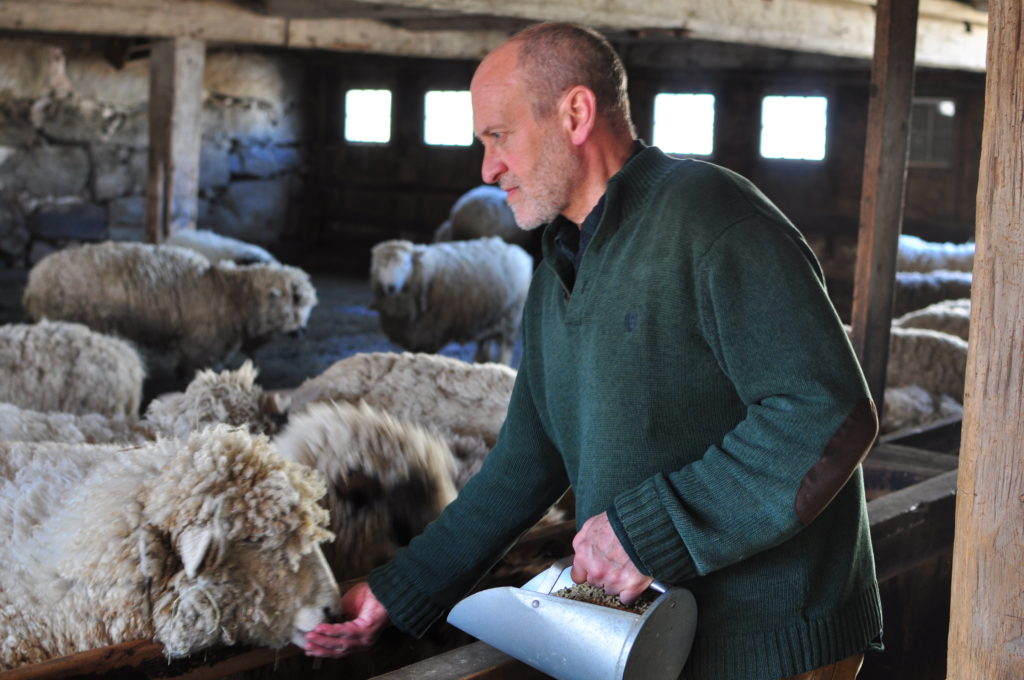 Brother Arnold Hadd tends to the colony sheep. At age 57 he is the youngest permanent colony member. 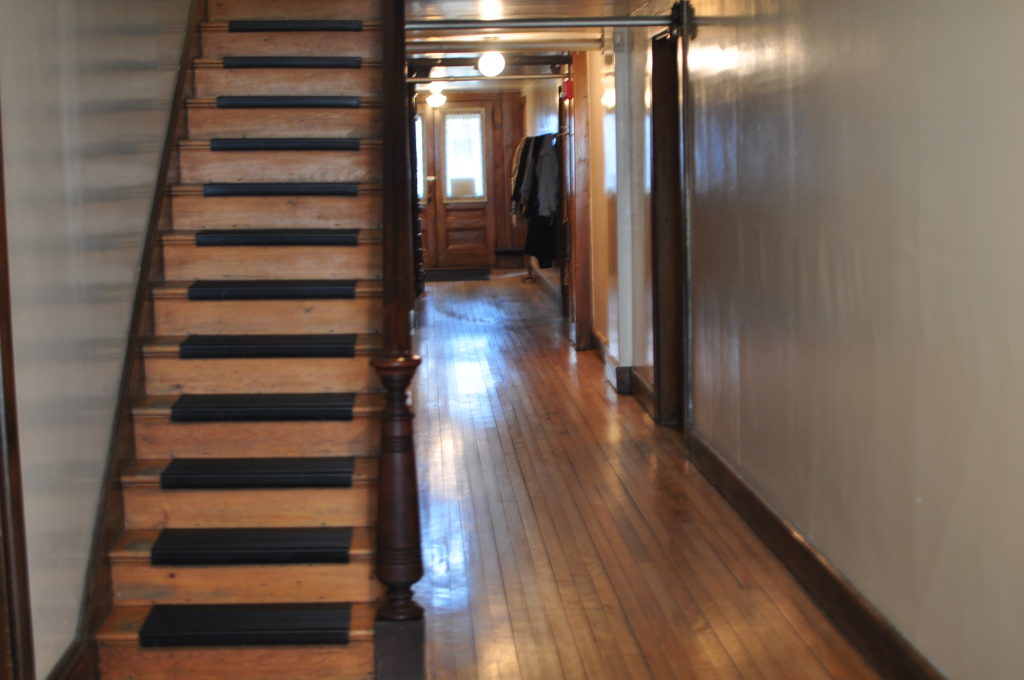 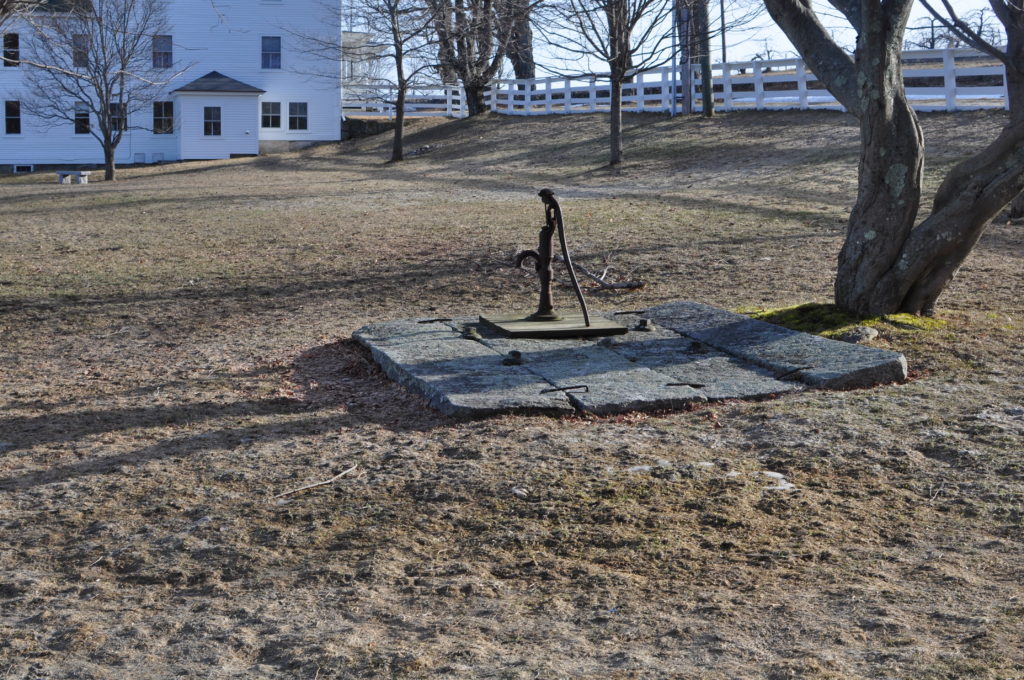 A well sits sentinel outside, a throwback to simpler days.

I was so excited to be visiting the last Shakers living.  But I think by being an hour late I got off on the wrong foot from the get go.

The embodiment of modern day Shakerism is Brother Arnold Hadd.  At age, 57, he is the youngest of the remaining permanent Shakers.  Brother Arnold shares quarters at Sabbathday Lake with  Sisters Frances Carr, 86, and Sister June Carpenter, 73.  The Shakers originated as an offshoot of the Quaker religion or the Methodists, historical sources vary.

Brother Arnold Hadd (who says the Shakers have Methodist roots) is a transitional figure, a bridge from the past to the future.  If the Shaker movement survives, it’s largely because he’s been the living link between the brothers and sisters of the past and any potential new converts representing the church’s future.  Brother Arnold was raised Methodist in Springfield, Massachusetts and became interested in the Shakers after his family visited a Shaker historic site in 1974 at the age of 18.  Five years and many visits to Sabbathday Lake later, he found himself joining.   Turns out his grandparents’ neighbors growing up were former Shakers, so he had connections with the culture as a kid.

A typical day for Brother Arnold is getting up at 6 a.m. and saying devotions followed by breakfast at 7:30, prayers at 8, and in the barn by 8:30 to begin chores.  In addition to the chores of running Sabbathday Lake, Hadd does the manual labor, bookkeeping, gardening, worshipping, and other tasks

Dress, even if it is subtle, creates impression and for some reason you think of the Shakers as being “frozen in time.”  And maybe in some ways they are, but if you were to run into Brother Arnold in the grocery store, though,you’d not think of him as being potentially the last of the line of Shakers, so steeped in history and mystery.  Instead,  you’d be forgiven if you mistook him for just another busy Mainer:  khakis and LL Bean sweater and a penchant for frequently checking his cell phone.  The Shakers are not anti-technology, for the most part they embrace it and innovate it.

Hadd says he and the two sisters that live at Sabbathday Lake abide by the three C's: celibacy, confession of sin, and communalism.

"It's a true Protestant monastic experience,"  he says of his Shaker lifestyle.

Hadd also says that most people are “interested in the externals”, the furniture, the cooking, the herbs, “not many people are interested in the religious aspects,” Hadd told me.  Had joined the Shakers when he was 21-years-old and Sabbathday Day Lake had a few more souls living there.  Now they are down to just three (four if you count the newcomer, more on him in a minute)

Like the Amish, people tend to hold the Shakers up to being on some higher plain and fact that Hadd quickly dismisses.

“We have our own struggles like everyone else,”Hadd says.

The Shaker church can only grow by conversion, not procreation, so that creates a challenge. There is a 29-year-old young man living at Sabbathday Lake now who is expressing an interest in living a Shaker life.   He’ll have five years to immerse himself in Shaker beliefs and lifestyles before being formally declared one, most would-be Shakers give up long before that.

Since we are all interested in the food aspects of Plain culture on Amish365.com I so badly wanted to see the Shaker kitchen and talk to Brother Arnold about the rich history of Shaker cooking, but he graciously declined to invite me into that part of their world.

The 29-year-old newcomer is a vegan, something that Brother Arnold says hasn’t altered his cooking style that much.

“He makes a mean frittata,” says Brian Burke, the 29-year-old.

« Amish in the News: Wisconsin Professor, Police and the Amish, Amish on the Beach, Buggies on the Roof, and Simply Amish
The Amish Cook: Gloria Serves Up Refreshing Lemon Pie »