It's always painful to turn on the news and watch the Middle East unravel.  This isn't a political post, but a personal one. I'l leave the politics of the Middle East for others to debate.  For me, it was just home.  The steel company in our hometown sent my Dad overseas to work in their international division.  So from 1976 - 1982, I spent off and on in the Middle East.  First, a tiny country called the United Arab Emirates and then Saudi Arabia.  Back then Dubai wasn't the ostentatious ode to opulence that it is now. 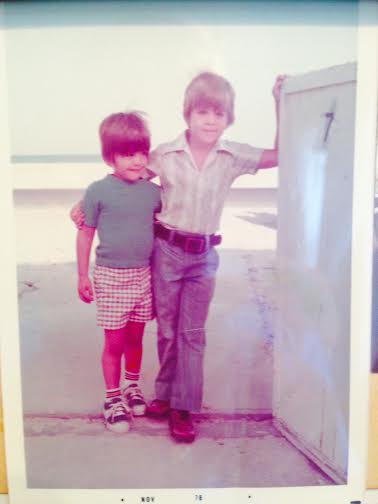 CAPTION:  me and my brother on the first day of the school.

My memories of that time in my life are still relatively clear.  In fact, sometimes I can remember my time there more clearly than what I ate for lunch yesterday.  Ahhh, short-term memory.   Anyway, I remember those days as relatively peaceful, idyllic.  We lived in a beach-front villa.  This photo was taken on the first day of school in the fall of 1976 in our front yard.  The Arabian Gulf (Persian Gulf is the more common name) can be seen right across the street.  We were spoiled in that sense.  We did go to the beach, but I don't remember it as a daily thing.  More of a special occasion thing.   I think there was a bit of an intimidation factor being foreigners in a different land.  But, wow, as a teenager or young adult or even now, if I had a beach right outside my front yard, I'd be there.  Every day.:)

Not in the photo, just off to the left, was an old, crumbling Portugese watch-tower, a remnant of the days when the coast was colonized by those intrepid European explorers.

The United Arab Emirates, where this was taken, was  a quiet backwater in those days.  The Muslim majority there were a peaceful people and I think even today you don't hear much about problems there or in neighboring Oman and Qatar, models of moderation in the Middle East. But it does sting every time I turn on the TV and see fighting in the Middle East (almost daily) and this new brand of barbarians, the ISIS.  I've always thought it'd be fun to return to the UAE, to visit the old hang-outs of my childhood: the souks, the shipyards, the beach...but as long as the area remains so unsettled, I think Aster will have to settle for just looking at photos with me.  So, perhaps, for me, spending an adulthood studying the Amish isn't a stretch.  I spent my childhood immersed in another culture, as an adult I've been immersed in another, but the two are very, very different.