For those of you on Facebook (probably 99 percent of you:) you know about TBT (throw back Thursday), that's the day everyone drags out their old photos and posts them for the world to see.  Sometimes I think it should be "throw up Thursday" because its a bit self-indulgent and, ugh, part of me cringes at seeing photos of me when I was 30 pounds lighter and 100 pounds more carefree.   But, in the spirit of TBT, I'll share a couple of images. 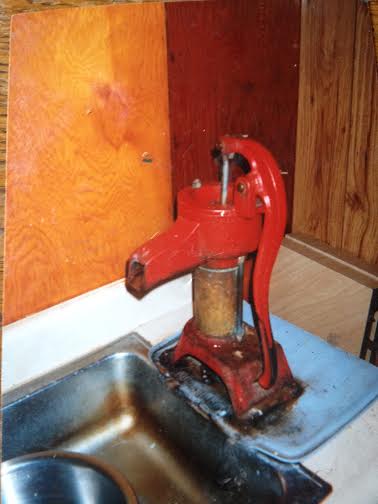 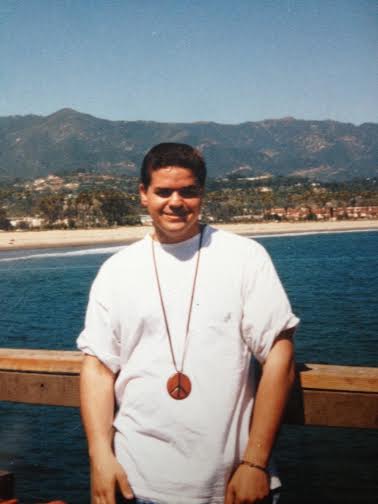 The first is of a water pump in the home of  late Amish writer Elizabeth Coblentz taken back in the mid-90s.  I remember this pump so well. It sat in a little water closet off the kitchen and when it was time to wash up for supper, you just approached the pump, gave the handle a few quick pulls,  and cold, refreshing water would come spilling out. You'd then quickly soap up and lather your hands and then stick them in the still-running water before pulling the handle again for a final spurt of water.    Ah, great memories of that place. More and more Amish settlements today allow indoor plumbing so I haven't seen one of those pumps in a long, long time.

The other image was taken around the same time, way back in the mid-90s when my brother was living in California.  At first I thought maybe it was taken on the Santa Monica pier.  But clearly the coastal area behind me looks pretty mountainous and relatively rural.  So I can't figure out where it was taken.  Maybe someone recognizes the exact spot?   Ah, yes, and you are probably wondering about the "peace sign" around my neck.  I wore it a lot in the early 90s.  Occasionally, someone would come up to me and admonish me for wearing a "broken cross" (apparently the "peace sign " can be construed as such), but I simply thought I was being 'cool' wearing the item.   Back in the early 90s peace signs sort of enjoyed a resurgence of sorts among people my age who were coat-tailing off their parents nostalgia.  The one I am wearing in the picture came from my mother who grew up in the heyday of the 60s.  I'm hoping that wooden peace sign on the leather necklace is still around somewhere either in my house or back at my parents.