I was going through some old papers in my office recently and I found something that brought back a memory from the early 1990s , I was trying to launch a companion column to The Amish Cook.  It was a column geared towards teenagers (back when people under the age of 40 still knew what a newspaper was).  It was cleverly - I thought - called Passing Notes (as in, passing notes in class…ha ha..clever…now the column would probably be called Sending Texts).  I was only 20 myself but already had an impressive journalism portfolio, so I thought I'd be a great person to be in charge of such a column.  Newspapers were always dabbling in new content trying to hook a new generation onto newspapers.

I hired a freelance writer to do some celebrity interviews that might be of interest to teens.   I penned some of the Passing Notes columns, freelancers wrote the others.  At the time my brother Geoff lived in Los Angeles and I’d usually visit him once or twice a year.  One of my trips to visit  Geoff happened to overlap with one of my freelance writer’s celebrity interviews.   So she asked me if I'd like to have breakfast with Kellie Martin who was then starring in the hit show Life Goes On, which was a ground-breaking show starring a young man with Down’s Syndrome.  I think at the time Kellie was maybe 17-years-old and her show was a major hit.    I was star-struck and smitten when the lovely Kellie Martin showed up in the lobby of the Beverly Hills Four Seasons where we were to have breakfast.  I thought “wow, maybe we’ll really hit it off.”   I figured I’d be in LA for a few days, maybe there’d be a whirlwind romance (nothing like the confidence of youth).   She ordered some fancy crepe dish while I think I ordered biscuits and gravy (a mismatch from the start).     But all she did was talk about her boyfriend at the time, teen heartthrob Joey Lawrence.

That's about as long as my list of celebrity encounters goes.  I talked on the phone once to Cincinnati Reds announcer Marty Brenneman.  I was working on a business project that he had some experience with and he was nice enough to call me.   Humble  guy.  He calls me up and says "This is Marty Brenneman from Cincinnati."   All he would have had to say was "this is Marty" and I would have known who he was.

Oh, I also briefly met Shania Twain at a book-signing.    I once stumbled into home-improvement guru Bob Vila in an internet chat room (remember those?) back in the mid-90s.   I asked him if he was really Bob Vila and he responded "Do you really think anyone else would be online pretending to be Bob Vila?"

My brother on the other hand has met a who’s-who roster of celebrities.  Many of them he met while a writer for the teen beat publication Bop.  But he’s written for a bunch of other magazines too that has had him cross-paths with celebrities. I asked him this morning about what celebrities he has come into contact with and here is how he responded.

So some of the celebrities I've interviewed, or asked a question of, include George Clooney (talked over the phone; he was interrupted in the conversation once by call waiting -- a call from his dad, Nick Clooney, which I thought was kind of neat), Ed Asner (by phone), Ann B. Davis (by phone), Bob Denver (by phone), Milton Berle (a question at a news conference of sorts at MTV), Keanu Reeves (ditto), Chris Evert the tennis star (interview via phone), Soupy Sales (by phone -- your readers will remember him) and I know that there have been others, but I'm forgetting them all right now. Recently, like two weeks ago, I interviewed Maria LaRosa, who co-hosts a show on the Weather Channel with Sam Champion.

Geoff also worked in a bookstore while between jobs in Los Angeles and there he met some real luminaries.  Melissa Gilbert came in and bought a book and Geoff, who was still nursing a childhood crush on her, was shaking so hard he almost dropped her credit card.  And I think he was equally star struck when Annette Bening bought some books.

Phone interviews are almost more surreal than in-person (I feel like I’ve done some other celebrity phone interviews also, but I’m not recalling them now) because you are just dealing with a voice.  So it can be more difficult to make a genuine connection.  But kind of neat he got to speak to Ann B. Davis who, sadly, passed away this week. 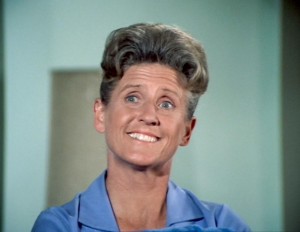 Do sports stars count as celebrities?  I think so, but they are a different type of celebrity than movie or TV stars.My Aunt Theresa once met Cincinnati Reds slugger Johnny Bench at an event but thought he was rude (Johnny, if you are reading this, this was probably 40 years ago and maybe you weren’t rude, but if you were, we all have bad days, no worries)  so when she saw his Mercedes in the parking lot she sat on the hood.

I’d be a lousy celebrity. I’ve been recognized a time or two in public from my videos and writing here.  But I was always caught so off-guard that I think I just stammered a greeting back.  Once was at a festival and the other in a buffet line at a wedding.So, that brings me to my questions of the day?  Have YOU ever met a celebrity?  If so, who and under what circumstances?