CAPTIONS:   A young Amish girl sips a soda with her younger sister in town.   Below: Pie, Oh, Pie!  Lots of pie, a dozen different flavors all for the sampling!    And Amish youth play volleyball in a field.

Friday evening I found myself visiting one of my favorite Amish settlements.  It's one I have written about often: the Wheat Ridge Amish community in southern Ohio. Rachel and her mother still had last minute preparations for my sister-in-law's baby shower, which was held this past Sunday.  So I was without my usual traveling companions in Rachel and Aster as I contemplated attending the annual Amish school benefit supper and auction in Wheat Ridge, about an hour east of Cincinnati.  Is it lame at age 40 to have my mother along with me instead?  I do truly like the solitude of the open road, but 90 minutes away hardly qualifies as a "road trip."   I also do like company and with all my writing lately and my Aster dad duties Mom and I haven't had a chance to catch up much lately.  So with Mom gamely volunteering to go, we headed for the hills.

We were rewarded with beautiful scenery, friendly folks, delicious food, and good conversation.  Plus we saw 3 white-tailed deer munching grass in the hills of Adams County.  The largest deer ever captured in Ohio was several years ago in Adams County by an Amish hunter.  Plenty of foilage to eat in these hills make the deer large and muscular. 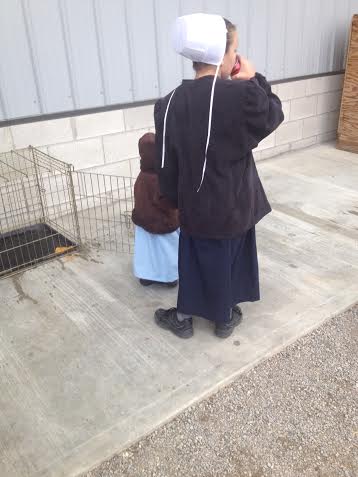 The auction was held in the Wheat Ridge Community Building, a cavernous meeting hall constructed by the Amish three years ago to hold large events and gatherings, either for the public or church.

Huge propane-powered grills outside are fired up beginning around 1 p.m. for all the chicken.   One of the Amish cooks in attendance was nice enough to give me their homemade marinade recipe which I will share tomorrow, so stay tuned!:)   The community building was filled with the smell of just-grilled chicken, homemade noodles, baked beans (amazing, and I got the recipe for these too) and dinner rolls. Oh, yes, and pie...plenty of pie:  grape pie, peach, pineapple, peach-pineapple, chocolate mocha pie.....and, yes, I got pictures and recipes:)    Homemade cream was also being served. The meal doesn't have a fixed price, you decide how much you wanted to pay and stick it in the donation box.  It's probably a good idea, I think Mom & I paid more than we would have if it were a fixed price.   And not wanting to inadvertently short the supper Mom gamely tried to pry an answer from the Amish girl manning the pie table as to how much we should donate per piece of pie because we wanted to take some back home with us.  But the Amish girl wouldn't budge, "just make a donation, whatever you want," she softly said.  So Mom did and  we took home pieces for my Grandma, Uncle Pat, Dad, Rachel, etc. 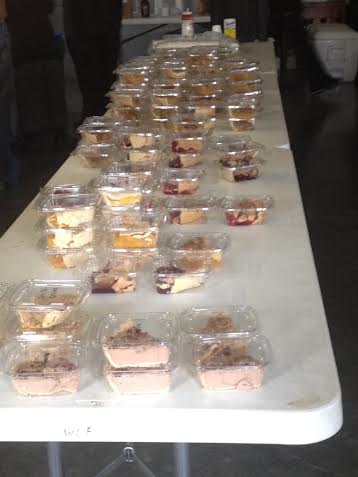 There are four church districts in the Wheat Ridge community and this auction and supper raises funds to be shared among the four schools. The ladies from one church are assigned to make pies, the other noodles, another meats, etc.   So many hands make for lighter work.

Meanwhile, as I was gathering information for this story, Mom was perched on one of the benches watching the auction.  She was eyeing the king-sized Amish-made quilts.

"Mom, those quilts go for hundreds and hundreds of dollars," I warned her, after I had filled my notebook with notes.

"Well, maybe we can just stick around to see," she said.  Mom even got one of the bid numbers that you raise your hand to buy an item. I half worried that we'd be going home with a $15,000 souped-up buggy, fearing she'd accidentally stretch while holding the number  skyward and be mistaken for a bidder.

"They said they're running behind, they aren't going to start the quilts until 7," Mom told me.  She doesn't know a stranger, somehow she can sit next to someone at an event like that and come away knowing their life story in a seconds.

"Why don't we drive around a bit and we can come back," I suggested.

So we spent a little time exploring the tiny ribbons of road that unspool around the lonely hills of Adams County.  These ridges are the setting for several of my fic books, and it always feels good to be here. 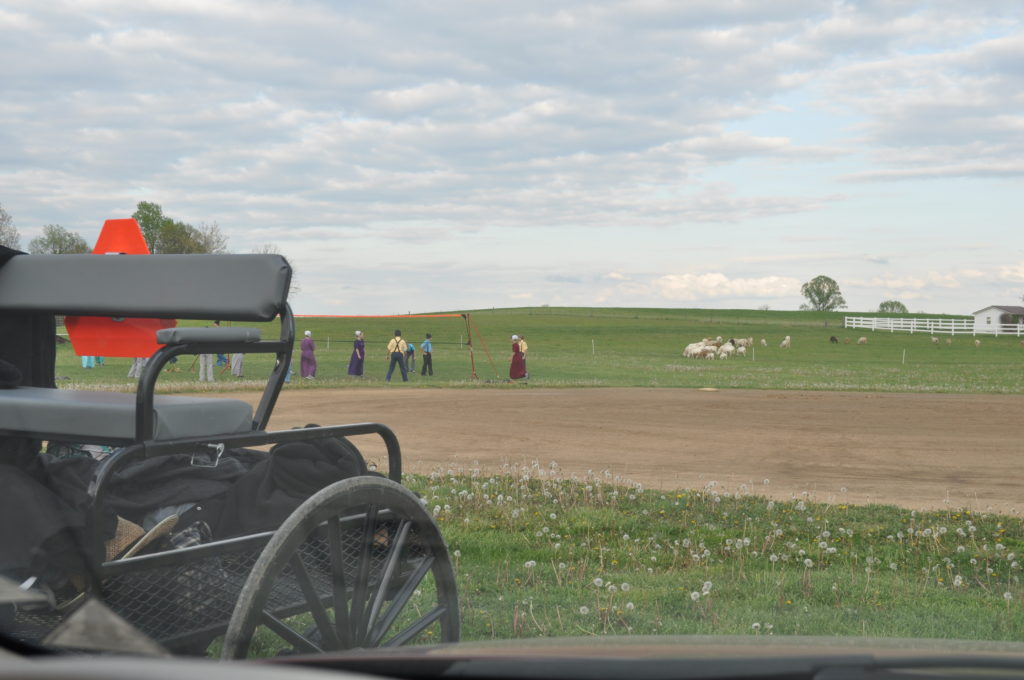 After Mom and I were treated to some beautiful twilight scenes from Adams County, we returned to the auction around 7 p.m. The parking lot is still fairly full.  Earlier, right outside the dining area  a group of Amish young people had set up volleyball nets and were playing spirited games.   The Wheat Ridge community features bright colors in their clothing, at least among the youth and I wanted to capture a close-up, but there was really no way to do it without bumping up against church rules. Capturing  these events on film can be a challenge.  I'm not going to take any disrespectful, invasive photos, but I don't even want anyone thinking I am. I even spoke to one of the ministers about it and he and I both agreed it'd be tough to capture a picture respectfully.   But where Mom and I parked on our return, the youth had set up a another "volleyball court" farther away and I thought this was a respectful beautiful shot that was not invasive. So while I worked on the photos, Mom headed for the auction barn to see if she could snag a $200 quilt.  I just shook my head.  No way, you are not going to get a quilt for $200.   Not one minute after leaving, I notice Mom returning alongside a husband and wife also heading for their car.

"That was fast!" I said, surprised.

So we did, but it was a fun, well-spent evening. Stay tuned this week for more scenes from Wheat Ridge and recipes!