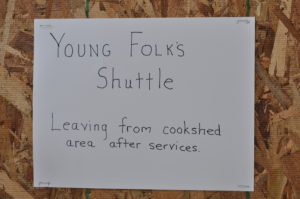 Perhaps the most notable aspect of the annual German Baptist meeting is the gathering of young folks.  Each annual meeting has one site for the worship and fellowship of the adults and a nearby separate location for the young folks (anyone over age 14) to gather.  Imagine 1000 young people jammed onto a farm and trying to feed them.  The site was about 5 miles from the main worship site.  There are plenty of cars on hand but if someone doesn't have a ride the church operates a "shuttle service" between the two places. 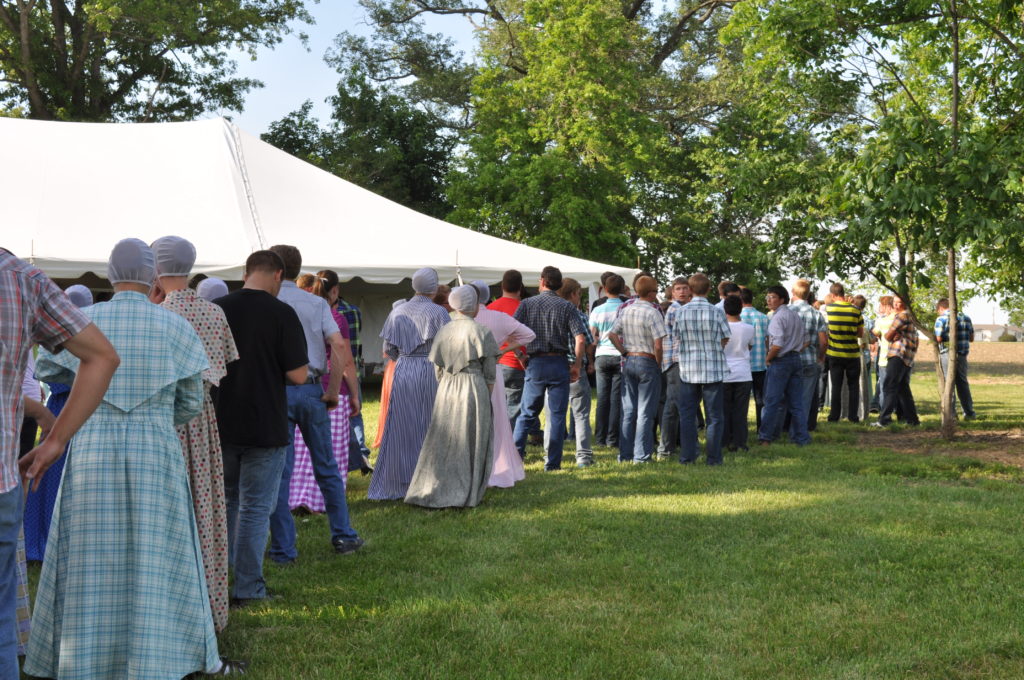 Twenty five regular volleyball courts were set up, 9 basketball courts, ping pong tables, and corn-hole.  So there were plenty of ways for the young people to expend their energy.

CAPTION:  Above, the Arby's line was the longest. 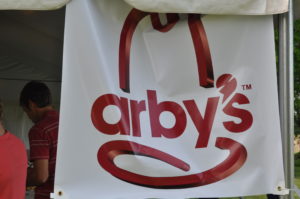 “We’re expecting to feed 1000 people tonight,” said an elderly, but spry, Mr. Peters (I didn’t catch his first name).  He and his wife were the ones who transformed their farm into a four-day retreat for the German Baptist youth.

“But they are all teenagers and young adults and we know how their appetites are, so you’re probably feeding the equivalent of 2,000 people tonight,” I marveled.

Mr. Peters chuckled, his long white beard blowing in the breeze, a twinkle in his eye.  “Oh, I should get going, but stick around and make yourself at home.”   He then broke out into a trot towards a field where most of the youth were gathering for an aerial photo.  A small plane circled above the crowd so they could get a photo of the kids assembled in the shape of a key.  A lock and key was the theme of this year’s young folks gathering, emphasizing that Jesus is the key.

This gathering also provides a chance for courting.  Many marriages have evolved from couples that first meet at annual meetings.  The crowd is a mix of unbaptized and baptized young adults, so you have those wearing "plain" clothing while others wear the typical teen universal uniform of jeans and t-shirts.

Food was the top draw, with Arby’s being on hand to serve up roast beef, an “assemble your own salad” line and a “gourmet potato” line.

There were homemade desserts on hand and those were popular too.  Most of the teens and young adults gathered under a tent to eat, while some spread blankets on the grass. Others skipped supper and just played the games. 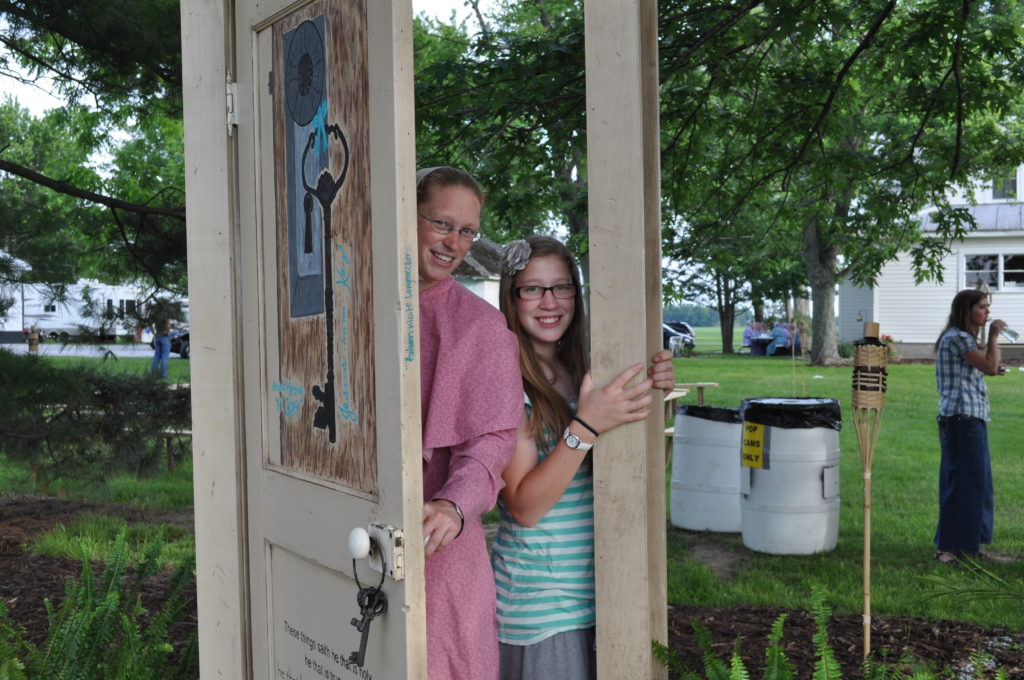 What struck me was how well behaved the crowd was.  Rosanna showed us around. We caught up with her 17-year-old brother Ivin and we spent a good 30-minutes trying to track down her 14-year-old sister, Joanna.  We finally found her.  This was her first year for being included in the young folks gathering.

“Just love it, I’m having a blast,” Joanna gushed and then scampered back off into the crowd.   But everyone knows everyone, it’s like a giant family reunion.  Caption:  Above Rosanna and Joanna appear through a door.  The door plays into the "lock and key" theme of the gathering, the other side of the door serves as a guest book for young folks to sign their name on. 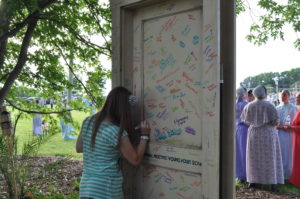 Rosanna, Rachel, Aster, and I strolled among the courts, and I was warily eying 25 volleyballs trying to make sure an errant one didn't come crashing down on my daughter's head.  A few balls whizzed close by us and I pulled Aster in closer.

After darkness arrives there are fire pits set up that everyone gathers around to roast marshmallows and enjoy some evening ambiance and by 11 p.m. the young un’s scattered for their lodging locales.  There are adult chaperones whose assigned role is just to patrol the grounds and make sure everyone is behaving.  Still, the chaperones didn’t have much to do since behavior was good.

"So, this is the future of the German Baptist church?" I asked Rosanna, my hands making a sweeping motion of the grounds.

And it appears from the young folks at the gathering that the church is in good hands.

Other scenes from the gathering: 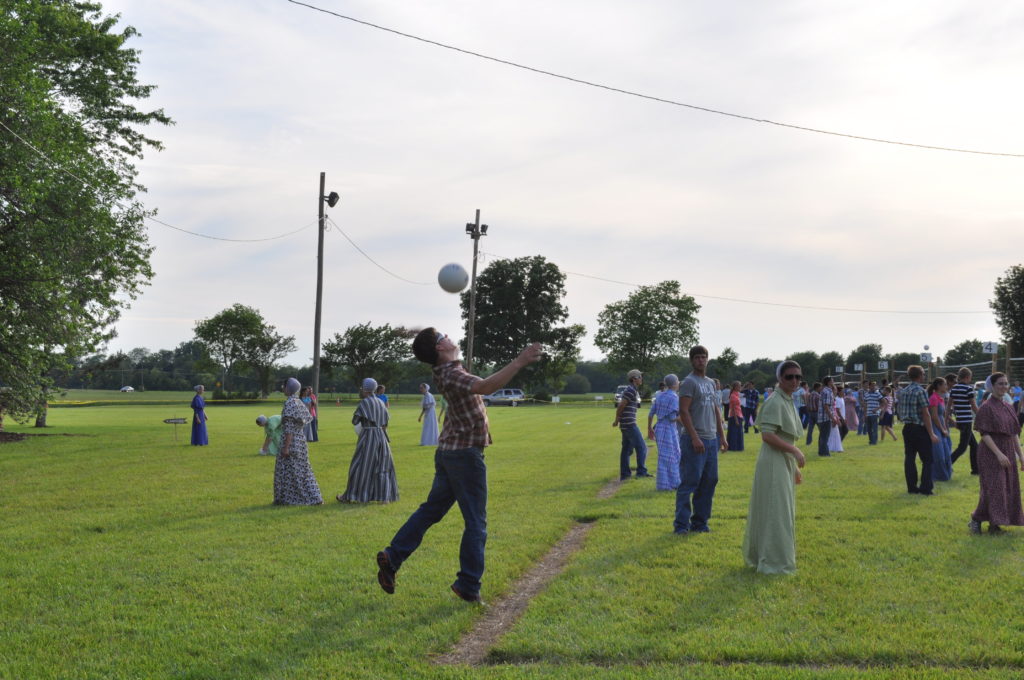 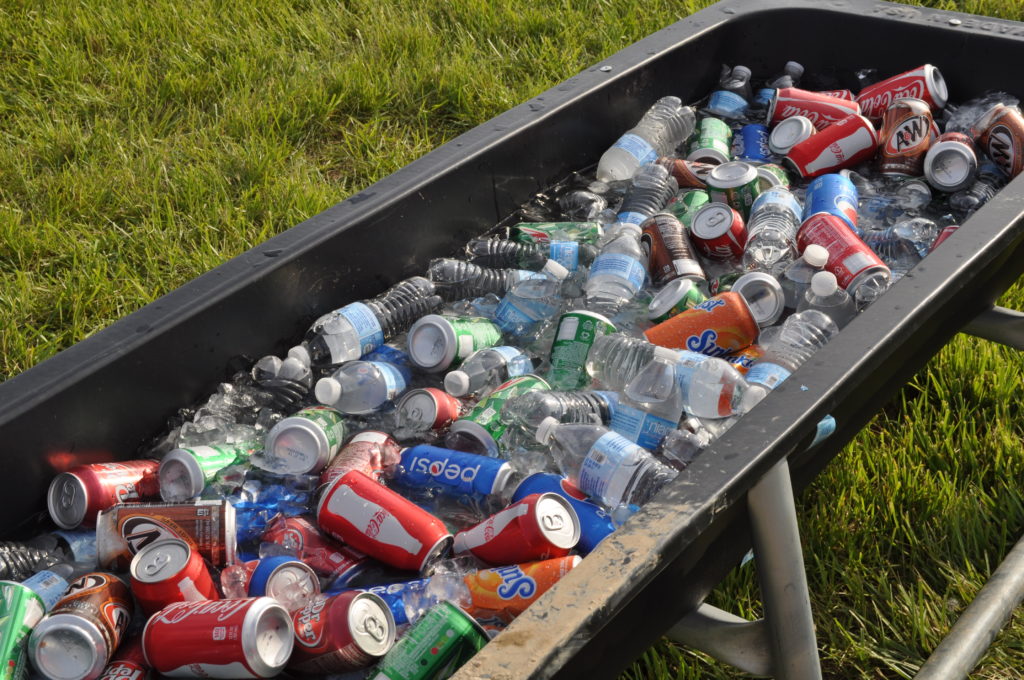