This Amish Coffeecake Bread is a classic Berne, Indiana Amish recipe.  I’ve had the opportunity to study Amish culinary customs and traditions all over the country, and the traditions in the Swiss Amish community around Berne, Indiana are unlike ones you find other places.

The cooking and baking in the Swiss Amish settlements in Indiana is just very basic, very traditional, old-school. I’m always amazed at what can be scratched out of basically nothing. Very creative cooks in the Berne community. The cooking and baking trends were greatly influenced by the paucity and scarcity of the Great Depression. And just tough economic times all around before and after then

This Amish Coffeecake Bread recipe comes to me from a tiny cookbook written by an Amish woman in Berne. True to form, the recipe didn’t have a baking time, or a pan size or anything like that, so there’s a lot of guesswork involved. But, I can tell you, the final product was good. I’m not quite sure why it’s called “coffee cake bread “, it’s really just a coffee cake. I was envisioning, well, you could put it in a loaf pan, a couple of loaf pans and get a slicable bread. In retrospect, maybe I should’ve tried that. Instead, I just used a 9 x 13 pan, and it turned out really really good. It’s almost like “monkey bread “in a pan. Almost. Or sort of a cross between a coffeecake and bread. Well, okay, maybe I know why it is called coffeecake bread. I’ve been picking on the cake all day yesterday and today, it’s that good.

We used two teaspoons of yeast, but you could also just use one package. My 5-year-old really wanted to make something, so in going through my Amish recipes, this just seemed like a good, easy one. She loves to knead dough and you can smack this dough around and it only makes the bread better!

She was proud of cracking the eggs herself, she did a good job, although I had to fish a couple shells out.

You may have to add a little more flour than the recipe calls for, I think I ended up using in the 8-9 cup range, you want a soft, elastic dough. So just use your best judgment. And, yes, she washed her hands well before kneading.

Spread it into a pan, a 9 X 13 inch baking pan or a couple of greased loaf pans. By the way, this recipe calls for "shortening", I just used softened (a stick microwaved for 20 seconds) butter and it worked great. The topping makes the recipe that much better, so delicious. Very cinnamon, so in some ways this is like a giant loaf if cinnamon toast.

1 stick of butter, half melted and half softened 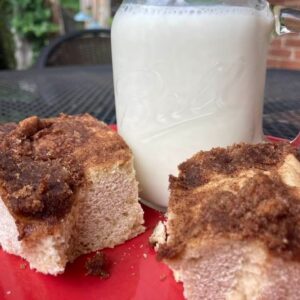