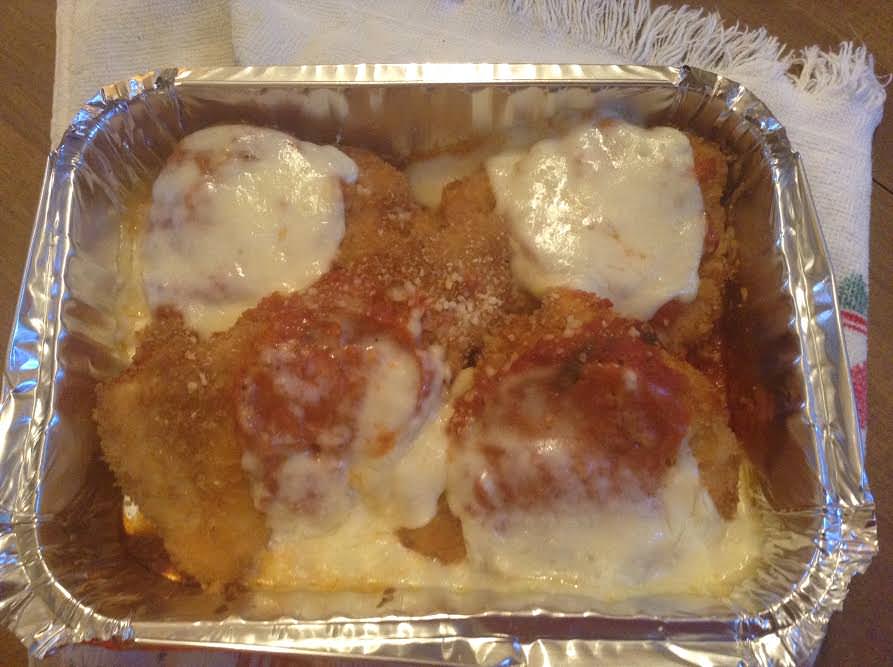 As a single father, my brother Geoff is often struggling to come up with meal options for his finicky teenage and almost-teenage daughters (not sure which is worse, a finicky toddler, which I have, or a teenager).   As an editor of a daily site about Amish culinary culture I am often struggling to come up with fresh content day in and day out.  So our two struggles collided in a good way this past week and this post is the result of that.

First of all good for Geoff for experimenting and never giving up on getting his girls to eat a variety of foods, from trying this own hand at whipping stuff up in the kitchen to gourmet-to-go meals.  When Geoff told me he picked up some “take and bake” Amish Parmesan Chicken from a local market I said “Whoa, wait a minute, you can’t serve them something Amish without getting me in on the action.”  So I implored him to take a photo of the meal and give it a review. I’ll let Geoff take it from here:

Honestly, I feel kind of silly reviewing this, but, sure, what the heck. I've been eyeing Take Home Tano in Loveland, Ohio for awhile now. It seems like a great idea -- grabbing what seems or feels like a home cooked meal and then popping it in the oven -- and if nothing else, it's a trendy idea. So I've thought about going periodically, but I work at home, and it wouldn't make sense, from a time management standpoint, for me to drive out to this place, buy one of their meals, and then drive back home, and put in the oven for 20 or 30 minutes. These meals -- at all of these places, I'm not picking on Take Home Tano -- are also kind of expensive, and so that's kept me at bay, too.

But I had an errand in the middle of the day this week,  and on the way back home, I thought, "Well, let's get something for dinner, and we'll see how it goes." I figured I'd probably spend around $30, which, again, is kind of a lot for one dinner, but I'd spend more on us if we went to a sit-down restaurant, and some fast food places, you can spend around the same amount.

Anyway, I stopped. I looked around. I bought the Amish Parmesan Chicken and their Mac and Cheese, which set me back $28.  Whoever helped me was extremely nice, for what it's worth, and she said that I could cook both items in the oven at the same time.

So that evening, I did just that and followed the directions. If memory serves me, I set the oven for 350 degrees, and the entree and side were both in the oven for 20 minutes. I told my youngest daughter, Lorelei, that I had picked up the food, but then I said to her, "You know, I think I'm going to tell Isabelle that I made this myself."

Lorelei could barely conceal her laughter, and Isabelle, ignoring her younger sister, took some chicken and scooped up some macaroni and cheese.

"So?" I asked, as Isabelle started eating.

"But I worked so hard on that. What do you mean, it's just okay?"

"Well, it's better than what you normally make," Isabelle offered.

And it was probably at that moment when Lorelei told Isabelle where the food actually came from. Then I tried it, too, and I liked the mac and cheese, but I had to admit, the Amish Parmesan Chicken seemed kind of bland. But I feel bad giving it a lackluster review because I'm not a great cook, and maybe if I had kept both dishes in the oven, say, five more minutes, and the chicken had been slightly hotter, maybe it would have been better. (Lorelei wasn't too excited by the chicken either, but she enjoyed the non-Amish mac and cheese.) And I had the chicken the next morning for breakfast (I microwaved it, of course), and it was quite tasty. So I wouldn't let my experience discourage anyone from trying one of these places. I plan on going back to Take Home Tano, either to try their meatloaf, which sounds good, or one of their other Amish chicken dishes (they have marsala chicken with something called Amish chicken flour dusted on it..) and Potato Crusted Chicken, which has Amish chicken...  I guess that means the chickens come from an Amish farm, or maybe they're just chickens who have adopted the Amish lifestyle and don't watch TV or use the Internet.

Okay, Kevin here again. Ha, ha on the Amish chickens.  My guess is that they are getting the chickens from an Amish supplier which generally denotes a higher level of quality.  I was excited to see several items on their menu (SIGH, no, I'm not getting a cent of revenue for talking about this place...I know I've been integrating ads more and more on this site but, alas, this is not a sponsored post) that incorporate the Amish chicken, including Potato Crusted Chicken and Chicken Marsala. 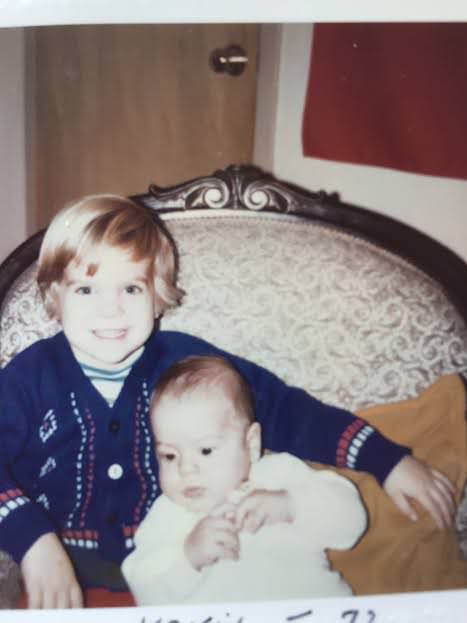 My big brother Geoff and I, circ. 1972 (my Mom thinks Baby Bea looks like that photo of me)

You know, as to Geoff's mentioning of blandness...I think restaurants have a very tough job in this regard.  If you just take a family of four, the palates can vary so wildly. My Dad thinks a vanilla wafer is spicy...I, on the other hand, could dump Frank's hot sauce on anything and be happy and I smother my pizza in red pepper flakes.  If a restaurant adds too much flavor to a take-home dish you run the risk of alienating some, so if that had been me I might have added a sprinkle of oregano to it to give it a bit more flavor if I thought it was bland.  I also would have served some garlic bread on the side and accompanied it with a fresh vegetable.  We'll let Geoff respond in the comments, but - tsk, tsk,  - I bet he did not do that.  That would have complemented the flavor of the chicken.

The one thing Geoff DIDN'T mention in his post is the one thing about "take and bake" meals that often turns me off: portion size. Now, this place offers three different portions (which is a nice option). But, DOUBLE SIGH, I eat monstrous portions of food... again, using my family...my Dad can (kudos to him) eat half a sandwich and declare himself full, I eat two sandwiches and barely register full.  So, for me, many times these take-and-bake places just don't leave me feeling full, although I sense I am in the minority there.

So, what do you think about "take and bake" meals, and where do you like to buy them?

Also, for those looking for a chicken Parmesan recipe in the Plain/Amish tradition, try this delicious-looking one from Mennonite Girls can Cook. Enjoy!