This easy Amish make-in-the-pan pie crust (Amish cooks call it pat-a-pan pie crust) will transform your baking world.   I've been tempted before to "cheat" on pies and use a frozen pre-made pie crust and there's nothing wrong with doing that.  But, when you can have a homemade crust in literally 5 minutes?  I mean, this crust is amazing.  It does not take long to make at all.

What we like about this is that you don't have to roll it out, you just make it right in the pan! So no worrying about where you put your rolling pin or finding a medium bowl, mixing bowl, or any other kind of bowl!  Just mix it up in the pie pan, press, and presto, you have a really good pie crust. This is a great one for kids to work on and hurried adults. My daughters have helped make this pie crust and it's just super easy.

The top photo is a whole-wheat version of pat-a-pan crust. The whole wheat flour makes it darker, the photo directly above is all-purpose flour which makes a lighter crust.

On the other end of the age spectrum, my grandma recently marveled over the crust, For an 89-year-old who still loves to cook but doesn't have the dexterity she once had, this will be a great crust. Rachel will be going over there soon to show her how to make it.

I'm always amazed that this crust only has like five ingredients.

I've used this pie crust recipe for many kinds of pies: lemon meringue, pumpkin pie, pecan pie, blueberry and the like.  It really works for almost any pie recipe.  The only thing I've not tried it for and I have my doubts it would work is for a lattice-top pie crust. I think lattice would be tough to construct with this recipe, but the crust really does cut well.  I've never used this recipe for a full top crust. I think you could do it with some imagination, but the beauty of this crust is its easy so if you going to get into top crusts you might be better off with another recipe.

Wash your hands and then mix the dry ingredients in a pan with your fingers just like above(yes, that's me).

You can use your fingers and the tines of a fork as your main tools on this.  It works in either an 8 inch pie pan or a 9 inch.  I usually use a 9 inch.  SIGH, the only additional advice I'd give...I used this nice glass pie dish that has bevels or "flutes" in the side, because you mix in the pan, the flour can get into the grooves and you have to clean that out.  A minor nuisance, but just a regular smooth glass or metal pie pan is the easiest for this.

Since I was going by feel on this, I realized quickly the dough was going to be too moist so I simply added more flour until it felt right (not too moist, not too try...think Goldilocks)

The only time I've ever tinkered with this recipe is by swapping out all-purpose flour for whole wheat. You get a nice, dark crust and wheat flour is widely considered to be more nutritious than white flour.

I know a lot of pie crust recipes call for ice water, ice cubes, or cold water and this one calls for cold milk. I've not experimented swapping milk out for water, this recipe works so well I've never felt the need to tinker with it.  I do use all-purpose flour.  Like many Amish recipes, this one is short on specifics. But all-purpose flour performs well.   I just use vegetable oil for this recipe.  There is no butter, salted or unsalted butter, in this crust.  No shortening either.  And I've never been tempted, again, to tinker with the recipe since it works so well.

I've made this crust many times and that I can now make it without even using measuring spoons and cups, which cuts down even more on the mess.  Once you get a feel for the proportions, you'll be able to do that too.

Definitely a great, flaky crust! This is a picture of the crust we used for the lemon pie.

This recipe makes a single crust, not a married crust (okay, dumb "Dad joke").  But, yes, it makes one crust.  But if you need to make two, that's easy also. Also, some recipes may call for this crust to under go a "blind bake" or par-bake, you can read more about it here from someone who can explain it better! But for most pie recipes this works fine. I've used this for pumpkin pie without a problem, but you can par bake if you want an extra crispy crust. 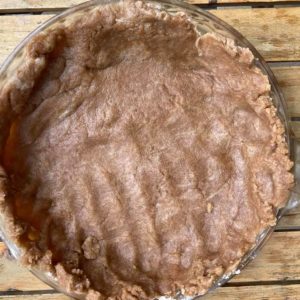 The most perfect pie crust - no mess, no fuss, just pat it in a pan and done!
5 from 4 votes
Print Recipe Pin Recipe
Course Dessert
Cuisine Amish

Tried this recipe?Let us know how it was!
« Traditional Amish Pumpkin Pie
Easy Amish Broccoli Casserole »