Pumpkin pie is one of those recipes that every Amish family has their own version and variation. Probably a similar sentiment is true for non-Amish families. Everyone has their own recipe, whether it's a frozen Mrs. Smith's or a scratch-made.

Today, I’m sharing with your a traditional Amish pumpkin pie recipe. It’s one used and enjoyed by the Amish Cook. But, gosh, there’s just so much that goes into a pumpkin pie, or doesn’t go into a pumpkin pie, depending on what your family's taste is like… I mean, my grandmother made pumpkin pie that I really like. But it was pretty bland, for most people. Hers was lacking in cloves, cinnamon, or nutmeg., it was just a very straightforward pumpkin pie… On the other end of the spectrum, you can have pumpkin pie that has 10 different spices, it’s really up to you.

This recipe reminds of my grandmother's because it is so very basic. But keep in mind, Amish cooking and baking recipes are generally very basic, no frills, you won't see a million spices. The cinnamon is what brings out the flavor in this one. Now there is absolutely nothing saying you can't use this recipe as your "base" and then add a teaspoon of cloves, or a teaspoon of nutmeg, some pumpkin pie spice or whatever you want. And, again, there are a lot of variations among families. Some add a splash of maple syrup, or even molasses.

I'd recommend a 9" pie crust for this pie, by the way.

The brown sugar works wonders in this pie, along with other basic ingredients. I'd bump u the cinnamon to a tablespoon, but that is just me. I love cinnamon!

This is the process of stirring the cream, the pumpkin, and the flavors come together!

Nothing better than a traditional Amish pumpkin pie and this recipe is a great starting point on your journey to a perfect pie!

Tears On Your Pillow Pie

Amish "Pecan" Pie Without the Pecans 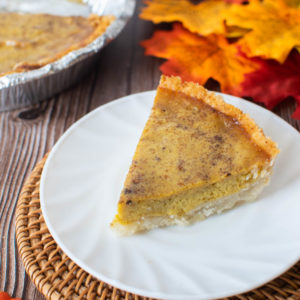 Tried this recipe?Let us know how it was!
« The Amish Cook: Best Amish Pumpkin Pie Squares
Easy Amish Broccoli Casserole »