Making sausage is a dirty, messy job that no one really likes. But eating sausage? That’s another matter. Everyone likes it.  Well, almost everyone. My father generally is not a big sausage fan, usually deeming it “too spicy.”  But I love the seasonings that make sausage sausage. And these delicious Amish Sausage Pinwheels deliver!

I have memories of family reunions when I was a kid, and sausage would be on the griddle for breakfast. When our family was much younger and my extended family more numerous, our annual summer reunion started at 7 AM and lasted all day long. Breakfast and sausage on the griddle was always one of the most popular draws for the over 100 people who would often attend.  Good sausage memories.

Later, when I was a young reporter for an Ohio newspaper I was put on the county fair beat. One of the most popular booths with fair-goers, and me, was the local pork producers booth which sold homemade sausage sandwiches. Man, when looking back at that they were really good.  They were sold on fluffy biscuits and you could get the sandwiches with or without cheese.  It always got them with cheese.

So, yeah, sausage is a breakfast staple in American culture and, as a subset of American culture, Amish culture.  The difference, though, is that the Amish make their own honest-to-goodness homemade sausage.  You will rarely find store-bought sausage in an Amish kitchen, unless it is store-bought from an Amish store.  Sausage can be used in casseroles, breakfast dishes and the like.  One of the more creative uses for sausage is this sausage swirl recipe. So easy and so good! In this recipe we won't be making our own sausage but we could! Instead we are making our own homemade crescent dough that gets just as flakey and golden brown in the oven. If you don't want to make your own dough like the Amish would, you can use crescent rolls or a sheet of puff pastry.

Amish Sausage Pinwheels are a full of flavor brunch appetizer recipe that are great eaten warm or cold as leftovers. They can be stored in the fridge or freezer and the recipe makes about 4 dozen small cooked sausage stuffed swirls. This is a great recipe that resembles a "savory cookie." In fact, I debated calling this recipe "sausage cookies" but didn't think that would sound appealing. But these are slice and serve just like a cinnamon roll would be, well, slice, bake, and snack. Enjoy!

Can I use crescent rolls instead?

Yep! Most recipes due. But when in Amish Country we roll up our sleeves and kneed our own dough. You can also use a sheet of puff pasty as well.

What are the best meats for making your own sausage mixture?

Used amongst the Amish are pork and venison.

Can I make these Sausage & Cheese Pinwheels?

Yes! A nice variation would be to sprinkle some parmesan into the dough or sausage mixture pre-baking. Or even after baking, sprinkle some cheese on top. I have also seen variations using a sausage cream cheese mixture or mozzarella cheese.

What about adding some veggies?

I'd go simple and do something like green chilis or green onions. Things that impart additional flavor to the sausage, like garlic & pepper.

Sausage and Potato Casserole - A classic! 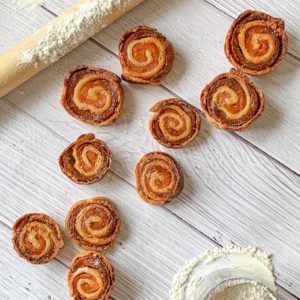