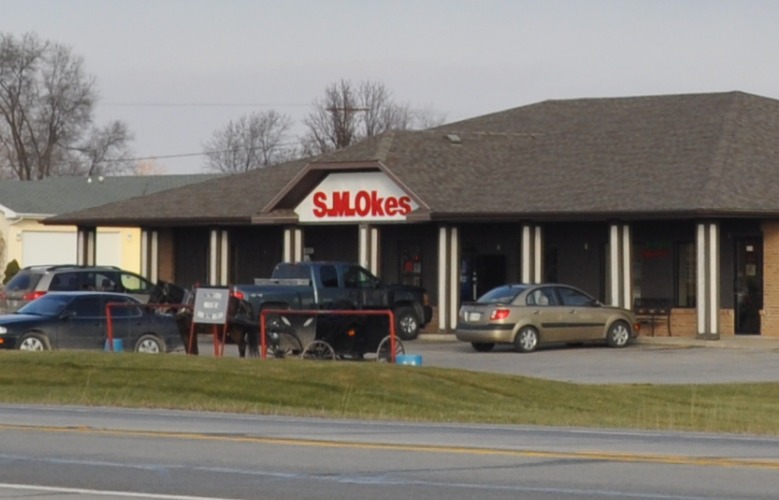 An Amish buggy parked outside of a "smokes" shop in Berne, Indiana

AMISH SMOKING: I've written about this topic before, but I stumbled upon a scene last week in Berne, Indiana that illustrated it well.   Note this horse-drawn buggy parked outside of a "smokes" shop on US 27.  This is about as close as I was able to get from an awkward vantagepoint in a parking lot across the street.

In my over two decades of visiting Amish settlements all over the USA and Canada I’ve only seen an Amish person smoking once, and that was a young Amish man in Geauga County, Ohio.  Seeing a youth smoking almost doesn't count since they aren't often bound by church rules in the same way adults are. Tobacco seems to be a habit that is either very private or very localized to certain Amish communities. One friend of mine attended an Amish wedding in Pennsylvania several years ago and wrote to me afterwards about how “some of the men sat in chairs outside under the trees talking and smoking” after the wedding, behavior that she described as “typical.”  Yet I have never seen anything like that.  It's one thing to smoke privately, but socially like that is something I've never seen.

There are some Amish in Pennsylvania, Maryland and Kentucky that grow tobacco and in some church districts smoking is permitted.

I have also heard of Amish in - this is a surprise - ultra-conservative Swartzentruber Amish settlements smoking cigars.

By the way, one of the biggest arguments against Amish smoking isn't health impacts (although that surely has contributed to a decline in the habit), but economic.  It's simply seen has generally too expensive of a habit to maintain and a frivolous waste of money for the traditionally frugal Amish.  Here is an interesting, more indepth, treatment of the topic.