Thanksgiving is an occasion that varies in its adoption by the Amish.  The general rule is that the more conservative the community the more likely it is that the fourth Thursday in November will be "just another day."  Don't think that doesn't equate to "thanks" from the Amish for the bounty and freedom our country offers, they just prefer to express their gratitude in a more low key, less commercialized way.  On the other end of the spectrum, the more progressive an Amish settlement is, the more likely are you are to find families gathered around a tradition turkey-filled table.  This adoption of Thanksgiving by more progressive groups, in my opinion, has more to do with secular, mainstream traditions and social mores being more accessible.  I think 50 years ago most Amish groups, progressive and conservative, didn't celebrate Thanksgiving as much as they do today.

So, what is on that Amish Thanksgiving table?   Just think traditional: turkey, stuffing, mashed potatoes, gravy, a casserole or two, some dinner rolls, and dessert...

To me - and I bet to many people - stuffing is the star of the table.  I mean, yes, most of us only eat turkey once a year on Thanksgiving but how often does one eat stuffing throughout the year?  If you're like me, hardly ever.  So Thanksgiving is a chance to stuff yourself with stuffing and these recipes are some of the best of the best for Amish stuffing.

AMISH POTATO STUFFING:  This is a classic and it should find its way onto your table! Click here for the recipe.

AMISH POTATO BREAD STUFFING:  I made this classic Amish recipe several Thanksgivings ago and it won wave reviews. Easy, flavorful, give it a try here.This is a popular stuffing recipe in Amish homes around Thanksgiving.  It’s classic Amish: easy, accessible ingredients with a wonderful melding of flavors.  The potatoes make this a heavier, more substantive stuffing, so if you’re already loaded up on mashed potatoes on your Thanksgiving table you may not want more potatoes…but if you’re like me, you can never have too many potatoes! Click here for the recipe. 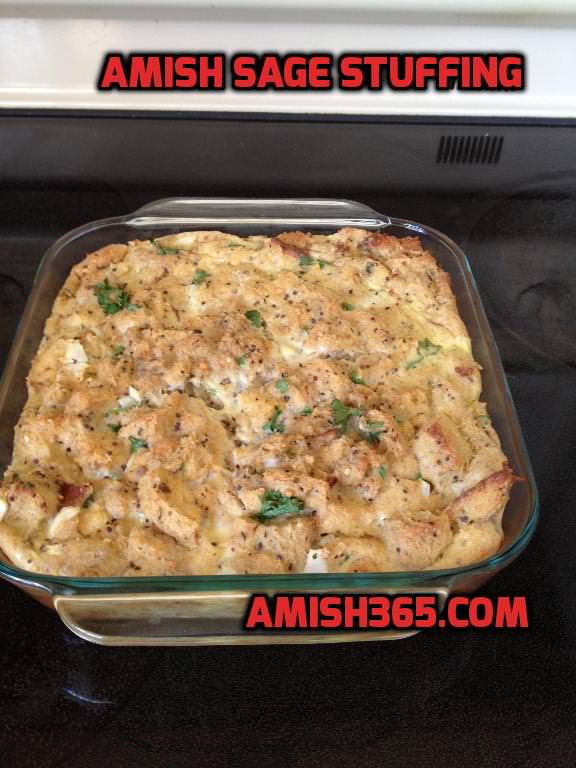 THE BISHOP'S SAGE STUFFING: This is a simple sage stuffing recipe that came to me from an Amish woman in Kentucky.  I made it for a family gathering several years ago and it was a hit (would have been more so had I not forgotten to add the melted butter!)  Click here for the recipe.

AMISH STUFFING:   This is from another website, a blogger who has a unique perspective on the Amish culinary traditions in both Holmes County, Ohio and Lancaster, PA. Check out this recipe here.

CORNBREAD STUFFING:  My beloved, dearly departed Aunt "Tootsie" used to make cornbread dressing and, wow, that ranks up there among my all-time favorite foods, full of buttery cornbread and stuffing flavor.   Cornbread dressing can be found on some Amish Thanksgiving menus.  Check it out here.

Oyster dressing is something that always seems to appear on the table at our family's thanksgiving gatherings, has for as long as I can remember.  Apparently oyster dressing has a following among the Amish as well. This recipe comes to us from Miriam Miller an Amish woman in Delaware, where oysters would be readily available.