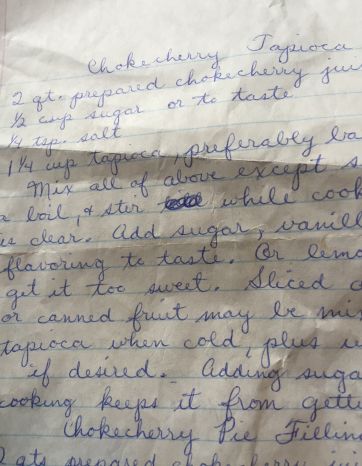 Amish foods often reflect the local fruits and veggies or food customs.  Spend some time among the Amish in Ethridge, Tennessee and you'll find southern staples like molasses, corn bread and soup beans to be mainstays on the menu.  In Montana, it's wild game and huckleberries. In Maine it is potatoes and blueberries and in Minnesota it is.....chokecherries?  Honestly, I had never heard of chokecherries until a William Bontrager in the Amish settlement of Fertile (about 90 miles SE of Grand Rapids) wrote to me to tell me about them.

This is what he says:

The culinary highlight of the summer in the Fertile community are the chokecherries that grow in abundance in the area. The chokecherries grow along fencerows and the plant can grow as high as 20 feet. We often bend them down to pick the upper branches or else leave them for the birds, as the trees are rarely big enough to climb. For the best flavor they should be picked once they are black but still have a shiny look, as the flavor is not as good once they are overripe. The chokecherries are harvested in buckets and brought back home where they are prepared for storage.

We usually stuff the cherries into jars and cover with water and water bath them, boiling or 20 minutes. When we want to eat them, we dump a jar into a cheese colander and mash the cherries with one’s hands, rinsing out as much pulp and juice until the leftovers look a little whitish. Usually 1 quart of cherries has enough flavor to make 3 cups of juice ready for pie filling, tapioca, or mush."

“It is the most purple food I have even seen, if processed at the right stage and not overcooked,” Bontrager remarked. The seeds should be started indoors and handled like tomatoes.

“We don’t usually harvest them until right before the first frost. They are a low growing plant with branches covered with clusters of dime-sized purple fruit once ripe. It is easiest to clip off the branches and carry them to the convenient place to pick the berries off,” Bontrager noted.  He also described how they use both chokecherries and garden huckleberries in similar recipes.

Here is an interesting YouTube video about chokecherries.  So, is anyone out there familiar with chokeberries or garden huckleberries?

You won’t see tapioca this colorful very often, the chokecherries color the dish so if you’re used to plain, pearl tapioca, this will be change!

Add lemon juice while the mixture is boiling if you get it too sweet. Sliced apples or fresh or canned fruit may be mixed with the tapioca when it is cold, plus whipped cream if desired. Adding sugar after it is done cooking keeps it from getting stringy.