I always think of pudding as being a creamy dessert sold in those little disposable containers at the grocery. Swiss Miss is a brand that comes to mind and I grew up on it.  Man, there’s nostalgia surrounding those puddings.  Makes me want to go out and buy a pack.  Sometimes Mom would make pudding and she’d put some in little glass serving dishes and it was just so cool, creamy, and wonderful.    But among the Amish pudding aren’t always the cool creaminess often associated with pudding.  Many Amish recipes are baked puddings, like this classic Amish cinnamon pudding.

A recipe for cinnamon pudding has lingered in the Amish archives for a number of years and I had always wanted to try it.  Puddings are popular among the Amish because it is easy to make big batches of it and since large gatherings are the norm in Plain culture, this is a good fit.

It’s a common recipe among the Amish in Berne, Indiana and elsewhere, often served at weddings and holiday occasions.

Aster asked for something easy to bake yesterday, so she and Rachel whipped this up.  One thing I will say about this dessert is if you make it, it will make your house smell super.  There’s something Christmasy about cinnamon and this pudding delivers the scent of cinnamon in spades.

And the dessert itself is amazing tasting  You get his caramely cinnamon gooey layer underneath a more cakey type layer.  Top it off with some whipped cream and this really is a winner of a dessert.

Now, Rachel hewed to the recipe but, if it had been me, I probably would have added two teaspoons of cinnamon instead of the called for 1 1 /4 teaspoons. But that is totally your call.

These basic recipes are often the best recipes!

So let's get to this recipe which will make your holiday menu sing!

Puddings are such a good, sweet dessert and a staple in Amish kitchens. 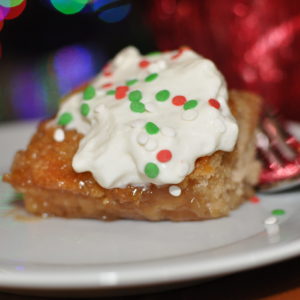