This article is a part of "The Amish Cook Column", a weekly series of featuring a story & recipe from Gloria Yoder, Amish wife & mother of six from Flatrock, Illinois.

Looking for the Delicious Amish Meatloaf recipe? Scroll down!

It was one of those rare days when the three little boys stayed with Daniel, Julia

left for school, leaving Baby Joshua, four-year-old Hosanna, and myself to spend the day thrift shopping with other ladies from church. This rare event had been planned since last summer, and now the day had finally arrived.

I strapped a car seat on either side of me, kicked off my shoes, and chatted with friends as we caught up on the latest news. We were 30 minutes from our destination when I spied a beautiful rainbow. "Look Hosanna; there is a rainbow!" I exclaimed. She was thrilled to see it for herself. "Hmm," I mused. I wonder if it has any significance to our day, it felt like a gentle touch of God.

Moments later, the driver had my full attention as she verbalized an anxious, "Ohhh!!" I took it all in at once; there in front of us, to our left, another 15 passenger van was pulling out right onto the highway where we were cruising 60 miles an hour. No vehicle could slow down in the short distance that spanned the two vans. My mind flashed to God, who can make the worst impossible situation end far better than we ever thought possible. Despite the driver's best efforts to slow and swerve to the side, there was no way around it. There was a sickening crash as broken portions of both vehicles sailed through the air. I glanced either side of me at my dear little ones. Praise God they were both as securely strapped as ever, perfectly safe. Utter relief swept through me, yet I was alarmed as I witnessed the girl, who had been strapped in the passenger seat, lay motionless on the floorboard by my feet. And oh, right before my eyes was the older gentleman, who drove the other van, limp in his seat. Despite it all, I sensed a deep peace from a Higher hand.

"Everyone, get out of the van!" the driver ordered as she watched the smoke rising from the van right next to ours. I made a lunge to the side door and pulled on the handle. It didn't budge. With an unspoken cry to God I gave the lever a mighty jerk as it swung wide open. I was greatly relieved as my dear friends bailed out as I unbuckled my children, briefly explaining to Hosanna what had just taken place. Scooping Joshua in one arm, making a quick grab for the diaper bag, with my wallet and identification cards, I grabbed Hosanna's arm with my free hand, as we too, made a quick exit. Muddy water soaked through my socks, but I couldn't care less. As long as we're all safe, that was all I cared about.

Meanwhile, Leanna, a dear friend, who is 20 years older than me and has been a blessing in my life in many ways, perhaps because she never married and was always there for me, now was doing her best to get off. Despite her intense efforts, she stated, "I just can't get off!"

Others came to her aid. I handed Joshua to one of the girls and snuggled Hosanna up to me, who was feeling quite traumatized by this time. We sat on a grass strip next to the highway. Gently I explained to Hosanna how the other van driver, 86 (which was now reviving) must not have seen the red light as he pulled out in front of us. I told her that soon the sheriff, ambulance, and fire truck would come to help us. Even though she was interested in listening, she preferred to keep her head ducked under the blanket that I had covered her with.

Never before had I been so relieved to see all my friends, including the one from the front passenger seat, climb out and be relatively okay. Dear Leanna went by ambulance to the hospital. Later we were told that she wouldn't be able to put any weight on her left leg for three months due to a severely broken hip joint.

We were so blessed by all the kindness shown to us as we sat, watching, and waiting. One lady brought bottled water and passed it out for everyone. Another gave a blanket for the children, and still, another, who was wearing a shirt that said, "LOVE," helped in many little ways. It put a longing in my heart to watch for opportunities to reach out to others in need.

The paramedic team ensured we were okay before we all headed for a shelter where we waited for another van to come to take us back home. Now, guess who felt climbing onto another van? Not I. Yet, realistically, there was no option. Buckling in my precious children felt like a greater privilege than ever before.

We had an hour to get back home. How delicious it felt to see and hug them all. I had earlier spoken with Daniel, briefly telling him our situation. Little Elijah, all smiles, piped up, "Mom, we prayed for you!"

My heart overflowed. Truly I'm too blessed to tell!

The following days, soreness set in, and black and blue spots appeared, revealing more of what happened at the accident, such as my arm that hit Joshua's car seat.Even though it was very traumatizing at the time, especially for little Hosanna, we are doing well. Hosanna was proud to show the seat belt burn on her neck to others.

Indeed we have so much to thank God for; if there wouldn't have been a seat belt to hold me back, it is hard telling where I would have landed.

So, tonight I am double blessed to have six beloved children who call me mother; and the love of my life, who calls me his wife.

Why not join me as I prepare Hubby's favorite Delicious Amish meatloaf for supper?

Meatloaf is a mainstay in most Amish kitchens, here are some other favorites!

A cheesy twist on an old favorite! 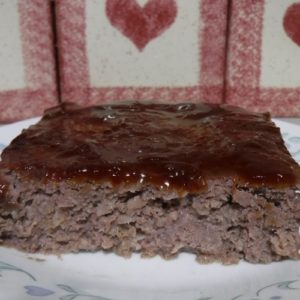 Keyword Meatloaf
Tried this recipe?Let us know how it was!
« Do The Amish Support Trump?
Anna Miller's Mississippi Mud »