Cider doughnuts are popular among the Amish and among the non-Amish.   One of the best memories I have in all my years of exploring Amish settlements is visiting a small Amish-owned orchard in southern Michigan.  Every Friday they’d sell these delicious, melt-in-your-mouth cider doughnuts.  Wow, oh, wow.

Now this Delicious Apple Cider Doughnut Cake recipe is not an Amish recipe per se, a Facebook friend posted it and it reminded me enough of baked goods that I’ve had in Amish homes that I had to share it.  And, yes, you will find boxed cake mixes in Amish kitchens.  I mean, some Amish will make their own mixes from scratch, and scratch-made cakes are definitely still king in Amish kitchens. But if you peek in the pantry of most Amish kitchens you’ll find a box of Duncan Hines in there somewhere.  There’s just a lot you can do with boxed cake mix in a pinch.

The Amish and apples have a long history.  There are many Amish-owned apple orchards and many very skilled growers.  There is actually a variety of heirloom apple called “Black Amish”, I’d love to taste it sometime.  The Black Amish is described as a:

wonderful apple and quite stunning in appearance. Although not mentioned in any old catalogs or other apple literature, it is believed to have originated in Pennsylvania. A very dependable annual bearer of dark red apples which hang well on the tree. Fruit is large to very large with varying shades of red and deep maroon depending on the amount of sun exposure. The yellowish flesh is crisp, fine-grained and very juicy with a refreshing tangy-sweet flavor. Ripens September to October.

You can read more about Black Amish heirloom apples here.

You can build on this recipe. For instance, I'd probably add more cinnamon to the cake, geez, 1 /4 a teaspoon barely registers. But I love cinnamon. You could probably add some honey or even molasses to it to add additional zip without ruining the baking chemistry.

What type of apple should I slice into the cake?

Any type of apple would work, a Granny Smith would add a nice tang to it, honeycrisp or golden delicious would add sweetness.

The grated apple in the batter is a great tip to really bring home the taste of autumn in every bite! 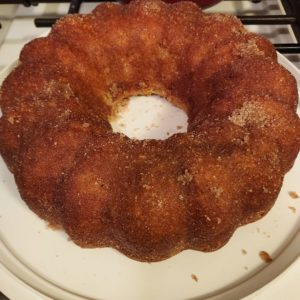