Here the birds are singing. I wonder if they too are glad for a break from the muggy hot climate on this early morning? I know I am. Without the heat, though, there would not be those bumper crops from the garden or even swimming days in the pond. Yeah, we’ll take it all as it comes, and when autumn rolls around we’ll heave a little sigh of relief.

Life remains eventful at our house. Last week we traveled to Holmes County Ohio, that major Amish tourist section of Ohio. The reason for the trip left us teary and torn. Another young man, in the prime of life, was called home to be with Jesus.

Keith's precious life ended two months, to the hour after my husband’s accident.  My beloved cousin, six years younger than myself, is now a single mom to their adorable one-year-old son Eric. As I met Amy next to the coffin; emotions, entirely too deep for words, swept through my whole being. I knew that in the end, all would be well, God would pick her up and carry her, but for now, it was raw. And it hurt deep. Both Amy and my parents surrounded us, showing their support. How could life be so grueling? But then, how can God, day by day, heal so deeply and gently?

The children had stayed with Aunt Mary in Danville Ohio. Though I missed them, somehow the time was not right to bring them with me. This also allowed me the freedom to grieve and process things deep within my heart without little hands clinging to my skirts, pleading for me not to cry. What child enjoys seeing tears streaming down Mommy’s face?

As I took my seat behind Amy and between my most beloved grandmother and her, memories flooded back of when it was me sitting next to the body of my beloved. And of how I kept sipping orange juice for stamina to help keep me going.

Now come with me the following afternoon as we walk out the driveway after leaving the funeral which was held next door to Amy's parents. Amy and I walked side by side with a common ache. Family and friends by the hundred followed on the quarter mile walk to the peaceful little cemetery on top of a hill, next to a  wooded area. The grief was so real, yet so unreal. Is this really true? Then this precious thought hit me. "Don't you think Keith and Daniel, too, are walking with arms linked, as they stroll the golden streets?" Despite the deep pain, it was a soothing balm to know that never again will they face any of the turbulence found on planet earth!


Arriving at the cemetery, chairs were set for Amy and I next to the grave of her beloved. The large white canopy tent, which had been placed over the grave was filled, with many others huddling around it.

German songs were sang and comforting verses read as the coffin was gently lowered into the wooden box in the bottom of the grave, then covered with another lid, before family and friends took turns placing dirt on top. The four people (one in each corner) traded off, tenderly covering the grave as a last token of respect to his body on earth.

Tears blurred my vision and my heart melted as I watched little Eric, with the help of his uncle, so innocently picked up tiny chunks of dirt and tossed it into his Daddy's grave. Memories flooded back of our little boys doing the same. Though little Eric is only 15 months old, there is no doubt he grasps more than we imagine. No doubt it will take time for his crashed world to come together and heal, as he misses his daddy. In praying for him, I've been comforted in knowing that there is One who also heals little hearts such as Eric's.

What followed was painfully precious. Amy took Eric, as they placed two white roses on the grave. Each niece and nephew were then given red and white roses to place on the fresh mound. It was beautiful.

After all was completed, we sang another bonus song that touched deep cords within. The words "Bind us together Lord," blended under the canopy tent as we lifted our hearts and voices in prayerful song to the Lord.

Then in all this, my mind traveled to all of you. Don't we all have our own story? You have your own trials, suffering, and even trauma to deal with. Aren’t we really all in this together? No, we don’t all feel the same thing, yet we all long for rest within, to not live in despair and pain. We are all on earth, none of us are in heaven yet, where all these difficulties will be gone forever and always!

At the funeral they served a large variety of cupcakes and mixed fruit to go with the noodles, salad, and sandwiches for the 750 people attending. I’ll wind up here with a cupcake recipe we enjoy and have used for birthday meals for our cupcake-loving children. Try these delicious Delicious Cake-Mix Cupcakes.

Can't remember where this came from, heck, it may have not even come from an Amish cook, but it is good. Maybe as good as the Delicious Cake-Mix Cupcakes!

This is an awesome recipe that comes from an Amish woman in Oklahoma.

This is a delicious staple at many Amish gatherings! 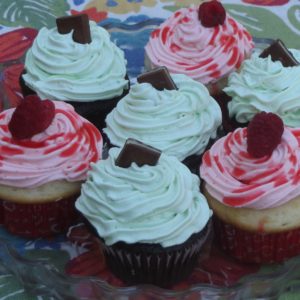 These take a box of cake mix to the next level!
Print Recipe Pin Recipe
Course Dessert
Cuisine American, Amish